My grandfather was born in 1898, and he was living in an exciting, and enlightening time. Horse and wagon were still used to deliver fresh dairy, ice, and coal, but you could send a telegram across the country, and it would be delivered that day. A train could take you from coast to coast in three or four days, and his neighbors had basic electric lighting. He lived well past seeing a man walk on the moon. In his later years he often wistfully talked about the good old days and thought things were moving too quickly. I was born in 1952, and technology was now changing so fast that my generation needed seat belts. 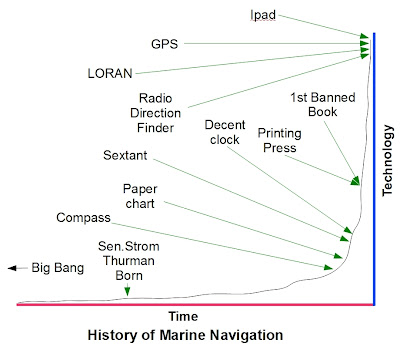 As an example of this, let's examine the Ipad. The original Ipad 1 went on sale in April 2010 and was discontinued in March 2011. It lasted a whole eleven months.

The Ipad 2 was introduced the day the Ipad 1 was discontinued. It's still in production, but it's marked for the hangman's noose.

The Ipad 3 was released in March 2012, and rumors are already swirling about the new IPad 4. The Ipad has become ubiquitous, and it seems like it has been around forever. The fact is the product is barely three years old and is evolving at an astonishing rate. 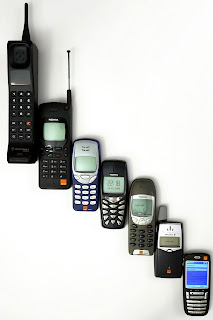 The average age of boats, for sale, at any rate, is a little over 20 years old. I'm going to extrapolate that most boats live for about 40 years.

There is a caveat to all of this. The older the build date of your boat, the longer it will live. The newer your boat is, the shorter it will live. It seems counter-intuitive, but I can make a straight forward case. 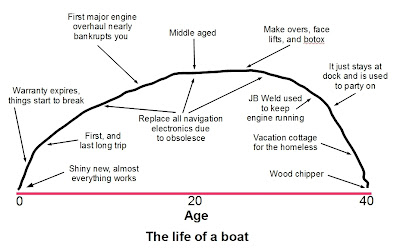 I picked a Hatteras 1972 58' Yachtfish as an example, and I'm familiar with the genre. This boat is already 4o years old and is ready for more. It was high tech, and beautifully finished when it was new, but by today's standards, we would say it's a low tech vessel because it wasn't loaded with custom built electronics.

This is why it's still around. It was powered by basic diesel engines, because that is all that there was, and you can still buy parts for them. It didn't have TV's that levitated out of cabinets. No touch screens, or digital engine displays. No ship-wide integrated multimedia entertainment systems, or joy stick steering. The list goes on and on. It is for this reason the Yachtfish has survived so well into old age. It was basic technology that ran the boat, and it all can still be fixed today. 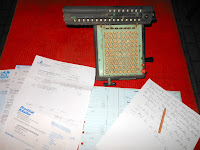 I'm not a Luddite, and in most cases, early tech adoption is my preference. Having an Ipad, computer, or flat screen TV become obsolete is just something we have all become accustomed to. Our lives revolve around mass produced electronics that augment our lives.

But a boat is different. First, when compared to the almost 11 million cars built annually in the US, there are only about 140,000 boats built. Now subtract all of the small boats, and that number is much smaller. Larger boats are basically built at low production volumes. A lot of gear is jammed into a small space in an attempt to provide you with all of the comforts of your home. This begs the question, "Do most of our homes have all that much technology, to begin with?"

The problem arises when boat manufacturers attempt to provide high technology to boats, without regard for long term support of the equipment. Because the volume is low, the fancy tech is expensive, custom, all too often proprietary, and has an ever shorter lifespan.

I'm going to equip my new Magnifico yacht with a lot of high tech gear that was installed as a sales enticement. I'm going to move the clock forward for about ten years. Darn, one of my two custom digital engine displays has failed, and the company that built it for Magnifico Yachts went bankrupt. The dash had a custom digital "four instruments in one" gauge cluster that failed. You can buy a similar one, but the software to program it can no longer be found, and the oil pressure readings are out of scale. The fancy custom light switch broke, and you can't find a replacement. The touch panel that activates the boarding ramp via a custom built relay panel corroded into aluminum oxide dust, and there are no more of them. A special relay fails, and you can't buy another one that plugs into the board.

These are not fictitious failures, they are all real, and only a small subset of many similar issues I have encountered. So why do the builders put this stuff into boats? Salt air, salt water, rainwater, and exposure to temperature extremes all shorten the lifespan of high tech gear, that already had a very short life anyway.

When you shop for your new boat, ask if the builder will support the custom high tech stuff ten years from now. Or will they have a new generation version that is now incompatible with your systems? Even more to the point, ask the dealer to get you replacement costs for any high tech items that appear custom built for the boat. If you're not aghast at the costs, consider buying replacements right now while they are still available. Then couple this with a lack of any real documentation about these systems provided to the owners and dealers, and your new boat will not live happily anywhere near as long as the 1972 Yachtfish.

I'm waiting for my two-month-old Ipad 3 to obsolete in a couple of months so I can buy the new Ipad 4. Sorry Ipad 1, most of the new apps won't work on your antique two and a half-year-old technology. Like veal, a lot of high tech lives fast and dies young.
Posted by Bill Bishop - Parmain at 10:09 AM