I used the word odure because a lot of people may not be familiar with its definition, and it sounds a little more intellectual. But from this point forward I am going to use "Number Two" in place of it, so that at least second graders will have a firm grasp of the subject matter. And no giggling now kids, or I'll start using the Urban Dictionary synonyms for the word, and you will definitively be instructed to leave the room. 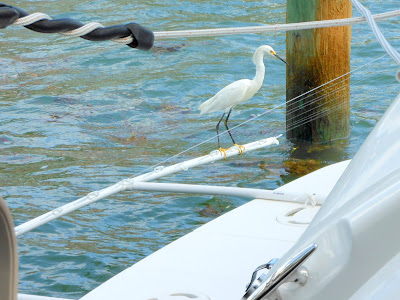 The battle with birds, and their deposition of number two by products on vessels has been going on since the beginning of boating. These often colorful deposits end up on your canvas, swim platforms, and decks.

Depending on the diet of the local avians, these leavings can sometimes be very difficult to remove. Sea birds that dine on squid leave a stubborn black stain caused by their ink. Flocks of little chippy birds eat the red Brazilian pepper tree berries, and actually get drunk from them. They leave lots of sloppy smaller reddish stains with black seeds. This is just one of those Florida things you get accustomed to, like rats the size of small dogs. Pelicans leave big white piles, and birds of prey often leave you with the remnants of fish carcasses on your deck.

The bird deterrent industry is a big one. Propane cannons, shiny things that wobble and move, plastic imitations of owls and snakes, and fishing line. Many don't work very well. I can't tell you the number of times I have seen birds sitting on plastic owls, and I once saw an eagle swoop down and snatch a rubber snake from a deck. This is another reason to keep your small dog inside, or in its stroller.

I have been watching for some time an approach that I thought was effective, for both the owner, and the birds. This is David Taylor's clever idea. It discourages birds from doing their feasting, and subsequent elimination on his swim platform, and at the same time provides a better perch for the birds to use. The birds get to dine Al fresco, and David gets a clean swim platform. A win win scenario for all. 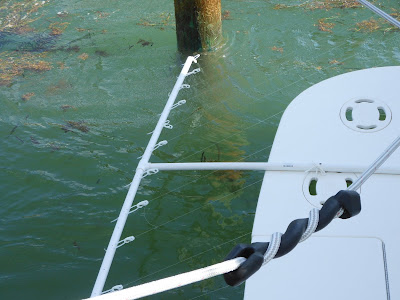 I have been watching  David's  device improve for some time now. The concept hasn't changed much, but he has continued to refine it. It's now easier to remove, and quicker to install. Since nothing is glued together, it disassembles and stows in a compact package. And best of all, there are no permanent attachments to the boat. 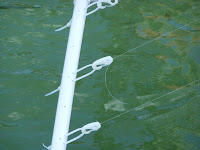 All of the components came from local hardware, and marine  stores. All of the parts are plastic, so nothing will corrode. A drill, and a hand saw were the only tools needed to build it. 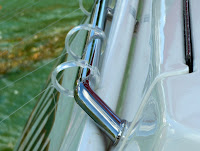 The battle between man, and critters is ever ongoing. Just look at the largely obsessive, and unsuccessful efforts to keep squirrels away from bird feeders. I think if you just left peanuts out for the small furry bandits, they would probably leave the bird feeders alone.

I personally know someone who has wired his bird feeder with 220VAC. When he hits the remote control switch, the squirrels are literally blown off the feeder. The survivors rarely return, and the ones that didn't make it..... well let's just say he has a really great rose garden. I like David's approach better. Inexpensive, creative, easy to make, very effective, and no sparks. Good Job David