Gordon Daniher's fishing team the "Dirt Draggers" are the most audacious, and hardest working lot I have ever encountered. He had entered the Sarasota Slam fishing tournament in the billfish division, and he had devised an epic plan. 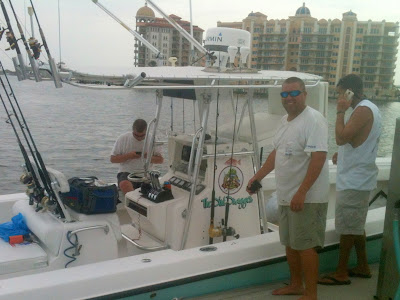 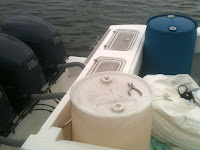 The plan is to load up extra fuel, in two fifty gallon drums in the back, and a fuel bladder sitting the bow.

They are going to leave Sarasota right after the captains meeting, and shoot straight across the gulf to Venice Louisiana, about a 450 mi trip as the crow flies. Refuel the boat, ice up, and fish for billfish, tuna, dolphin, and wahoo in the northern Gulf of Mexico. Lots of floating platforms, and rips to work. 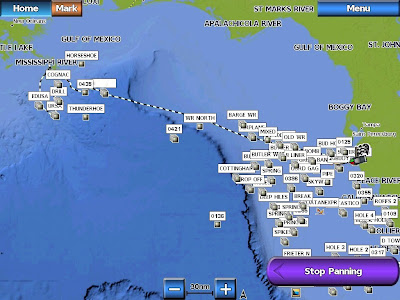 A quick check of systems, radar, weather, and the Contender's crew heads out of Sarasota. The first waypoint is set, and off they go into the dark Gulf of Mexico on a Tuesday night for several hard days of fishing, and physical deprivation. You gotta love this sport, and they do.

They have good nav gear, and know how to use it. A Garmin 7212 with the GXM51 weather module, the GMR 18 HD radar, GSD 26 chirping sounder, and the bad boy Airmar 25 element  R599LH transducer, all installed by myself.

Using radar they made it to Venice LA non stop, and from their black and white track you can see they made it back. The expeditionary fishermen's trip was marked by swells that slowly built to 6 feet, with occasional 8 footers being spun off from hurricane Ernesto.

They caught a huge amount of fish, and on any other trip it would have been a resoundingly successful voyage. But unfortunately no billfish were found at all despite all of their experience and efforts, and what they were catching was only marginally tournament grade. Gordon suspects that it might have had something to do with hurricane Ernesto's presence to the south, but we will never know exactly why no billfish were found. 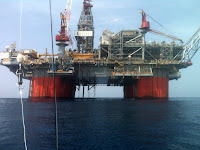 I caught back up with the Dirt Draggers at the dock in Sarasota at Marina Jacks. The boat was somewhat cleaned up and the gas barrels and bladder were gone. Beers had been snapped open and were being used to add some enthusiastic vigor to the fish stories. 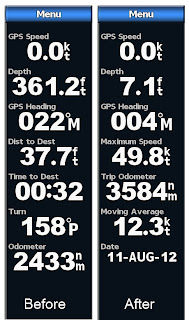 The team's odyssey had covered 1150 nautical miles over three and a half days, with a good chunk of it traveling at night. The radar was invaluable, they had no difficulties locating hazards, and there were many to be steered clear from. The northern portion of the Gulf of Mexico is littered with oil wells. There are over 4000 unmanned rigs alone, and large numbers of servicing, and fishing vessels are plying the waters. Unlike Motel Six, they don't always leave a light on for you, so watch out. 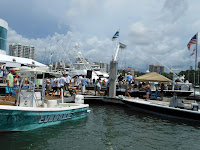 This years charity is the Sarasota Boys and Girls club. In addition all of the caught fish is donated to local food banks, and this years total I understand was about a very fresh 750 lbs. 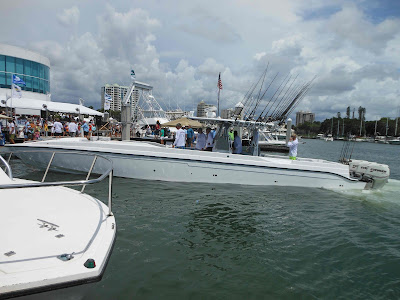 A Hann 50' center console came into dock while I was there. Although they are built in Sarasota, I had never seen one. The boat with six people on board looked empty. Their market is primarily military, and law enforcement organizations, but they do build very rugged off shore fishing versions. It is a substantial center console to say the least. What was just as impressive was the captain gracefully squeezing it into a 51' space.

So it was a busy day. Lots of stories, some controversy over tournament rules, docks jammed with boats trying to offload monster fish, and beer everywhere. But this was strictly for medical re-hydratation purposes. A beer costs just about as much as some bottled waters, and under the right circumstances it's tastier. 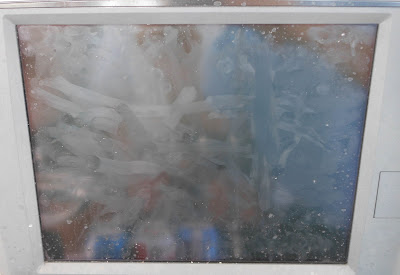 A damp micro pore cloth will make this mucky and oft used Garmin 7212 display spotless. Although when its on, you hardly notice it. It was clean when Gordon's boat left, but after nearly 1200 continuous miles of fishing, it did get a little dirty. 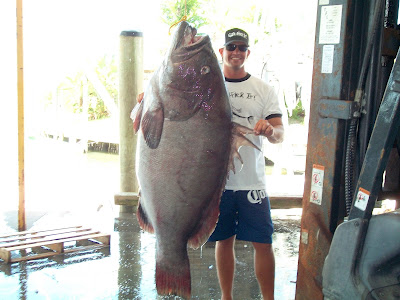 So for this tournament it just worked out okay for Gordon, and his Dirt Dragger's team. But Gordon is smart, works hard, has an experienced crew, and he is stubborn as all get out. I'm putting my money on him for next year. As you can see, they can really catch the big ones like this 206lb warsaw grouper from last year hanging next to team member Jason Boyll.