Diel, or no diel?

Is this a big diel, or not? This is the question of the day. What we know is the image was captured in the Gulf of Mexico approximately 150 miles due west of Sarasota Fl. The boat was just on the edge of the continental shelf.

The screen shot was taken in the morning (late February) using a Garmin GSD 26 running on low chirp (sweeping 28kHZ to 60kHz) outputting 3000 watts. The transducer is an Airmar 599LH 25 element in hull unit. You can see the depth. There is a fuzzy broad line at 500'. This is most likely a secondary bottom echo. The line below it, running slightly downhill is our puzzle. The line is about 30' thick. and you are seeing about 11.2 minutes of recorded bottom. The descent rate of the line is 5.3' per minute. 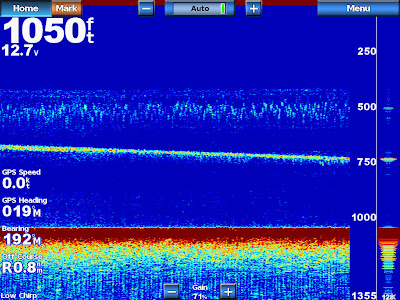 A line was seen the previous evening in the same place. It looked very similar, but instead of descending, it was rising up. The boat had stopped after fishing all day, and Gordon Daniher was playing with his new sounder unit. He went into manual gain, ran it up a bit, and the line appeared. At the time he thought it was maybe a layer of bait fish.

I have circulated the picture around to several oceanographic institutions for an opinion. I thought at first it might be some sort of thin layer of plankton, but it turns out the line is too deep for that, and then one of the researchers suggested it might be a diel layer. But unfortunately there wasn't really enough information to verify this.

Diel vertical migration is when a species rises nearer to the surface at night to feed, and  then sinks down in the darker depths in the morning. One of the several reasons theorized this happens is at night when it's dark, it's harder for predators to find you. When it gets light they retreat back to the darker depths. As one researcher commented in a paper, "it's better to be hungry than dead." Lots of creatures do this, although not always by any means in a layer. Submarines first noticed this phenomena during WWII because they had the appearance of a false, or second sea bottom.

I think it was a diel vertical migration maybe comprised of necktons (baby fish, crustaceans et al). Despite the apparent symmetry of the line, had the gain been turned up more you may have seen the line was actually thicker, and perhaps not quite so regular in appearance. I think we are just seeing the core of the layer, and not the total extent of the layer. That's my theory, and I'm sticking to it, for now at least. I just can't find a way to say that a thirty foot thick descending layer is a false sonar artifact, and it persisted for a long time. So much for my PhD in marine biology I bought for $20.00 online.


The first professional I had an email discussion with wanted a lot more data about the image, starting with the raw data. Is there back scatter data? How many days of data do you have? The answer was of course zip to all of these, but it swings me around to the first point. The Garmin GSD 26 with this transducer would have made oceanographers drool with envy just a few short years ago, and is likely the equal, or better in hardware to what a lot of scientists use today.

The major difference between the current marine chirp fish finders, and the research versions of the technology is the ability to export and manipulate the raw data, and to use a wider range of frequency specific transducers. 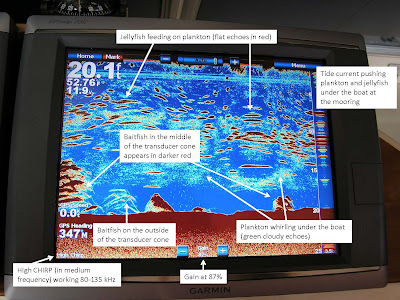 My second point is that if you do see something interesting, and need, or want some interpretation of the image, collecting information about the image really helps. If you're using a chirp fish finder, your system can most likely capture screen shots. Take several with the gains increased and decreased. Change to the sonar setting pages, and take screen shots of the settings, and lastly, make a waypoint at the location. This will also capture the date and time along with the location.

I borrowed the picture above with permission from the Airmar blog. It's a good read. If you blow it up, it's amazing the detail that is being seen, starting with clearly seeing those bags of water called jellyfish, a first for me. Even more amazing to me is you can see the plankton the jellyfish are feeding on.

These are very sophisticated machines, and if you take the time to learn how to use them, there is no telling what you might discover. I'm working on my authoritative paper titled "Diurnal icthyoid population studies of fresh water springs in the Gulf of Mexico" by Bill Bishop, PhD, Marine Biology. Hey, I did pay twenty dollars for the diploma after all. I'm going over the Chum Bucket for lunch now. Diel, or no diel? That is the question.

Many thanks to the real professionals who took their valuable time to review the photo, and provide input.