Florida's governor, and cabinet convened this week in Tallahassee for an emergency closed door meeting to discuss the emerging sturgeon threat. A cabinet official, speaking off the record said, "It's apparent to us that Florida's sturgeons have been infiltrated by some branch of al-Qaeda. Not a single person was injured by a sturgeon in 2010, but we're smart enough to put two plus three together. Osama bin laden was killed in early 2011, and in that same year nearly a dozen sturgeon suicide attacks occurred. This now explains where the sturgeons were over the winter, terrorists training camps."

A press release from the Governor's office said everything is on the table including revoking the sturgeons endangered species classification, and suggesting boaters should be well armed in order to stand their ground should a sturgeon attack. The Governor is also considering that an opportunity to create jobs might be a silver lining in this threat to the citizens of Florida. In addition to the present danger by sturgeons, there are plenty of dangerous animals in Florida that threaten both tourist, and business interests such as panthers, snakes, and scrub jays. Press secretary Thaxby Thiswhistle said a draft plan to offer bounties for these vicious creatures will be available next week for public comment. 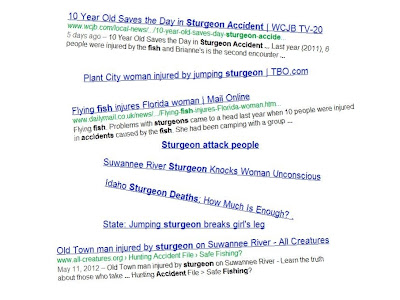 Despite the current scuffle with the Department of Homeland Security over access to sturgeon immigration status records to insure they aren't illegally voting, both state and DHS officials are assuring the public that techniques such as water boarding are not being used to interrogate sturgeons. Should anyone see a sturgeon with a radio antenna attached to their head, contact DHS immediately.