Too much tech, but not enough lifetime.

I'm the oldest of three male urchins. Because I was the oldest, I got the more important jobs in the household. At about 12 years of age, I was promoted, and the next oldest sibling got my old job of taking the pipe wench outside, and using it to turn the antenna pole until the Chief, (spelled Dad) yelled that's good, no no back a bit, stop." It was 1964. There were three TV stations that operated until about midnight, and we watched it on a black and white TV. This was good because I had now graduated to the job of TV repairman PFC Bishop.

This job consisted of quietly watching the activities when the TV was not feeling well. The scenario was always the same. The TV lived in a custom built niche, and much like the Virgin Mary, the set was metaphorically worshiped nightly. When the TV broke, the Chief would extract it, and set it on the dining room table. Screws were removed, the back came off, and the plug was detached from the back, and plugged back into the set. The lights would be turned down, and the set was turned on. All available eyes would look at the tubes to see who would be the first to spot the tube that was not glowing. "Aha", would declare the Chief, that's the problem. The set would be unplugged, the tube extracted and put into my hands.


The job of the young TV repairman PFC Bishop was to ride my bike with tube in hand to a local convenience store where there was a tube tester very much like the one below. It was a heady responsibility. My keen eyes would study the pin pattern on the tube, and find the socket it fit into. Once in place, you would push a button labeled 'Test".  The needle would stay in the red if it was bad. You didn't want it to go into the green since that meant a trip to the actual TV repairman to get it fixed, and no TV for a week. Almost always, the Chief''s diagnosis was on the money, and I returned with a new tube. The smallest urchin's job was to change, and tune the channels. It was a good thing remote controls were invented, for him at any rate.

Enough of the technological nostalgia. The truth is that unlike the old black and white TV, almost nothing made today that is electronic can be fixed when it breaks. When a higher tech product is new, you can buy replacement boards for it, but as a product ages it will quickly become obsolete, and manufacturers stop supporting it. The question is "How long does this take? The answer is "It's hard to tell exactly, but we do know that it is getting shorter all of the time, and sometimes it can be very short". This is where we start. 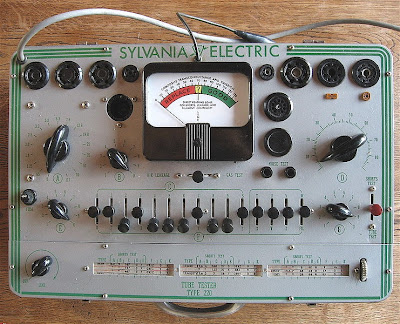 Products become obsolete for three reasons. The first is that technological advances render older products unattractive in the buyer's mind and sales diminish. The second is that components used to make the product are discontinued due to low demand, again driven by technological advances. The third is smaller innovative companies are not always successful for a variety of reasons, and they are either sold, or cease to exist. 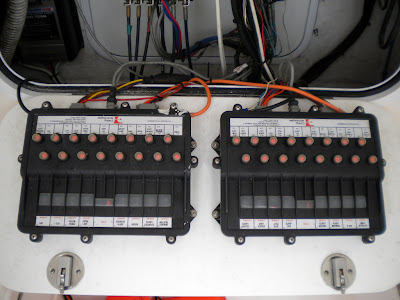 A simple case in point about all of this are the two boxes you see above. These are relay boxes used to turn things on and off on a boat. They got their switching orders in life from sealed rubber membrane switch panels on the console.

In this case, the manufacturer sold the product line to another company, who promptly redesigned the product, and stopped manufacturing the old product. The boat was only a few years old when the box on the right failed. I found another box after hours of searching, and it was the last one in existence. When one of these boxes fails again, all of the stuff will have to be ripped out, and something new will have to be installed in its place, like regular switches or another module system. This will not be a simple or inexpensive task. 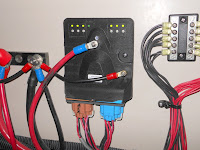 I'm a lover of tech, and an early adopter that loves, to a point the "bleeding edge of technology." I want the latest camera, my new one is twice the camera my two year old camera was. But on a boat you have to be careful how you do this. There are two parts to any boat. They are either things that lay on the surfaces, like chart plotters and cabin lights, then there are things that are buried in the boat like electrical systems and plumbing. We all understand how a radar array could be replaced, it may not be a piece of cake, but it's not an earth shaking task.

Imagine for just a moment that you had to replace all of the wiring on your new 60 footer. I shudder at even imagining how it could be done at all. Wiring that snakes up in-between panels, or under headliners. Miles of wire bundles going everywhere. But the good news is wire rarely ever goes bad, but being able to identify where a wire goes, and what it does can be an odious task. For most boats, if all of your wiring somehow was destroyed, most insurance companies would likely total a larger boat right on the spot. 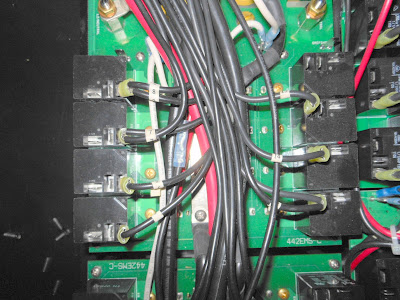 I'm dealing with a nice boat with a power distribution system, and custom master electrical panel. The boat was purchased new, an an inverter system for the entire 110VAC side of the boat was installed, and a second generator was added.

The boat currently has zero 110VAC, which is useful for minor items such as refrigeration,  entertainment systems, and lighting due to what appears to be an inverter failure. There's currently no documentation on any of wiring with the exception of the owners manual which has basic wiring diagrams for a boat that has no power distribution system. No information on the after market equipment installation or integration can be found yet, and the original installer is MIA. Two hours of searching the boat with the captain finally yielded the inverter location, behind a mini frig in the master stateroom.

There are two points to this discussion. The first is that the more sophisticated vessel systems become, the greater need for good technical documentation, and more sophistication begs the thought, "What is the realistic life span of the high tech systems, on your boat, and if they failed what could you replace it with, if the original equipment was no longer available?" For a power distribution system, major failure means no boat power at all.

So I'm not going to stick my neck out very far and make a good Vegas bet. The current average age of boats for sale is about 20 years old according to some data I have looked at. I know that in twenty years, or maybe even possibly in much less time the existing power distribution system will fail, or parts for it will no longer be available. Boat builders should know and plan for this, but I think this is not yet apparent to most.

All of the PDS wiring should be clearly labeled and terminated on blocks. Termination is now on proprietary connectors. Module locations need to documented, and placed in accessible locations where it's possible to do new interconnect wiring. Panels need to have the same requirements. System programming flowcharts, software code, and complete as built wiring diagrams, should be supplied to the owner upon delivery of the vessel. All gear should be off the shelf. Specially designed gear should be avoided if at all possible, and none of this "it's top secret" stuff please.

I don't want anyone to think that I don't like this type of technology, because I do. I just know that if builders don't plan for the inevitable, their buyers will pay a steep price for today's technology, tomorrow. By the way, I know wire isn't cheap when you buy it, but the long term warranty costs for it are very low when compared to the bleeding edge.

The photo of the tube tester was taken by Wikipedia user Steve Jurvetson
Posted by Bill Bishop - Parmain at 4:26 PM