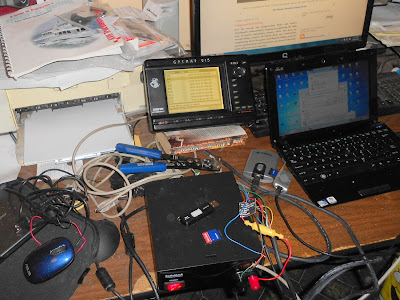 For many, waypoints, are just easy to replace convenient locations in their chartplotter. But to many, waypoints are critical to their work, or avocations like fishing, and diving in particular. These can be very difficult to recreate, if at all.

Old electronics are going by the wayside, and new gear is being installed. The owner stares, at the old stuff being piled up on the deck, and then looks down at the tattered book in his hand filled with many hundreds of waypoints accumulated over the years. He now doesn't know what to do. It will take considerable effort to start from scratch, and hand input a thousand waypoints, but there is a better option, and we are going to use the Andren software to go through a couple of scenarios. 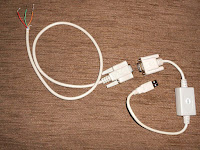 There are two paths you can take when migrating waypoints from one system to another. The first is using data cards, doing the conversion with the software, and loading the waypoints into the new system.

If data cards, and readers are no longer available for your older system, you can in some cases, download the waypoints using a NMEA 0183 transfer which we are going to do here.

To pull off a NMEA transfer, we need some tools from our secret chest, starting first with a  good quality USB to serial adapter, and a serial data cable with the critical wires stripped and identified. In this particular case the red serial cable wire is receive data (pin 2), the orange wire is send data (pin 3) and the green wire is data ground (pin 5).

I just heard some screams of anguish coming from the ether, so I can tell that some of you were just sucked into the black technical vortex, notwithstanding your garlic and amulet. So if you need to do this, and your head is now hurting something awful, find a good installer to give you a hand.

Once the mystical wires have been identified, you interface them to the old chartplotter's NMEA send and receive wires. You will also need a power supply to run the GPS you're trying to communicate with, or you can use ships power.

My experience says this is easier done in a cool and comfortable place, which paraphrased means not hunched over, and sweating profusely under the console of a boat while trying to read a sun washed out laptop's screen.

With the wiring correctly done, and the Garmin set to "Data Transfer" all that remains is to go to the Andren "Tools" menu, select "Upload Download GPS", and select "Garmin." 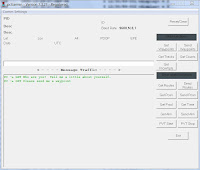 A little widow pops open, and starts to talk to the GPS. The PC asks, "GPS, who are you? Tell me a little about yourself." You click "Get Waypoints", and the PC says "GPS Please send me a waypoint", and it does, again and again in order until there are no more to send. It's all so politely done. All of the waypoint data, and I mean all of it is now in a spread sheetesque format on your PC. 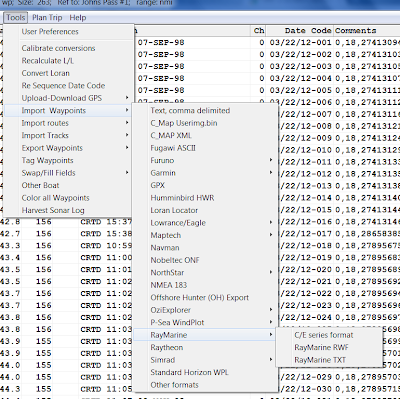 Above you can see the import options, and to the side the possible exports. If you can save the old data on a supported card, meaning you have a card reader for it, the conversion process is pretty straight forward. Import the file, fix it if need be, and then export the file in the desired format.

There is some nuance you may have to deal with here. In my card based conversion, the nearly 1000 imported Raymarine E-120 waypoints had name lengths of up to 16 characters. The new machine, was a Garmin 7212 which allows only up to 10 characters in its waypoint name field. The majority of the Raymarine waypoints were saved with a GPS given name like "Waypoint 128, Waypoint 129...", you get the drill.

So if you exported these names into the Garmin with only 10 characters for waypoint names, what you would end up with is "Waypoint 1. So if the waypoints were exported as is, all waypoints named Waypoint 100 through 199, end up being exported as waypoint 1.  Worse than that, if the new GPS doesn't allow identical names, and most don't, then you end up with just one "Waypoint 1."

The Andren software allows you to edit the names, and other data with ease prior to exporting the data. So in this case I did a global find, and replaced the word waypoint with a W. So now the new names are W 128, W 129.... The longer alphanumeric names I had to hand change so they were 10 characters or less. This didn't take a long time. 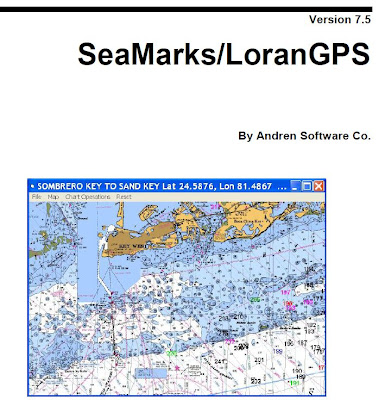 This is both a remarkable, and comprehensive piece of software. It converts TD's to Lat/Longs with the most complete set of waypoint conversion options available anywhere.

Move Furuno waypoints into a Raymarine system. Take the Raymarine data, and use it in a Nobeltec system and so on. You can also edit, organize, and print hard copy books containing your waypoint data. There is a trip planner, and a utility to create custom maps using the supplied NOAA BSB charts.

I was able to take an antique Garmin unit, read out the waypoints using the NMEA interface, convert them to the Garmin "userdata.adm format and upload them to a new Garmin 7215, and it worked a treat including changing the icons to the current Garmin form. The e-mail tech support from Carl Andren was very responsive, and at $85.00 for the software, this is  a bargain to say the least.

I want to briefly touch on the GPX format. This is as close as you can get to a waypoint format standard for everyone but mariners (PC based marine navigation systems generally excluded), and wouldn't it be nice if marine chartplotters adopted it. Some do, to some degree, like Garmin's Home Port, which will accept GPX, and convert it to the userdata.adm format used by its marine chartplotters.

There are tens of thousands GPX waypoints available online covering almost any imaginable points of interest you could think of. You're cruising, and you want to have local historical markers placed on your chart plotter, you can use the Andren software to do this for you.

No goats, or waypoints were injured in writing the story, and no commercial consideration was accepted. It's the only comprehensive system available to do all of these waypoint and LORAN conversions. If the "Dark Arts" scare you, or you don't have a local shaman, Andren Software can do the conversions for you.