Who doesn't like going to a boat show, especially now that this almost extinct event is now making a big come back. I love the nostalgic odor of plastics and styrene out gassing in a large confined hall, the $12.00 boiled hot dog and beer, the hundreds of desperate salesmen clutching their binders searching for the elusive Mr. Big who may actually buy a boat, and the carnival feel. I always carry one of those small checkbooks sticking out of my shirt pocket to activate salesman's drool and sweat glands.  But to be honest, I rarely look at the boats. I know that after a boat is delivered to it's owner, and actually dropped into the water, it will be just a matter of days before I'm called to fix it. I can then examine it up close and personally with lots of tools while muttering pejorative verbiage under my breath. 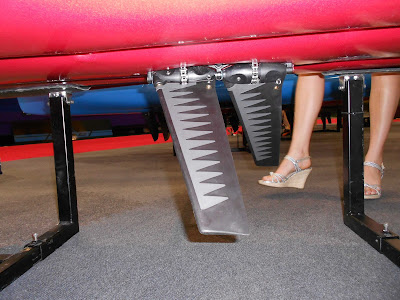 One of the first things I stumbled upon was the Hobie Mirage propulsion system. The very pleasant Miss Hobie, wearing her best "come hither" footwear kindly consented to push on the pedals to show this counter intuitive drive system in action. These flipper gizmos retract up when not in use. I have seen this system work, and despite the fact it emulates a tuxedo wearing flightless avian, it really does perform well.

If exhaustingly propelling yourself around at glacial speeds in a kayak while sweating profusely, and getting a wicked bad sunburn isn't to your taste, you can get rid the the avian flippers, and use a Torqueedo electric drive system instead. You then will have the energy to slather the zinc oxide on that wicked bad sunburn you're going to get anyway. 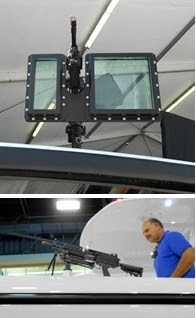 I have noticed the increase of fishing boat builders who now offer the option of equipping your vessel with light machine guns. With a cyclic firing rate of better than 750 rounds per minute, this will allow the well prepared boater to deter people from stealing their fishing spot numbers, boarding by Nazi frog men, taking out those Somali pirates, or stop a Kraken from sucking your boat down into the abyss. 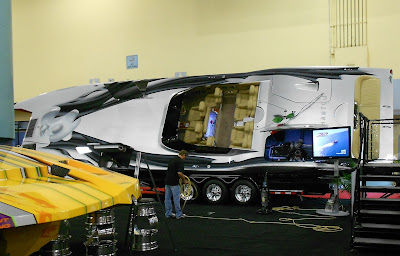 Despite the fact the economy has been steadily improving, boat show space is still very expensive. There is an increasing trend towards tipping boats up on their sides. This has two benefits for the builder. It saves lots of space, and it stops people from actually getting into the boat and leaving fingerprints, or dripping ketchup from their hot dogs on the fine Corinthian pleather. They do open a hatch to show how big the inaccessible and colorful engines are. 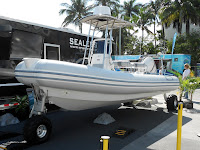 I did find what I believe to the perfect boat at the show made by Sea Legs. What makes this boat so unique is that you can drive it on land, and it never has to go into the corrosive ocean making it last much longer.

Go fast boats were abundant at the show, as well as staff to support sales. Here are a couple of sales professionals helping a potential buyer sound out words he's having trouble reading in the brochure. 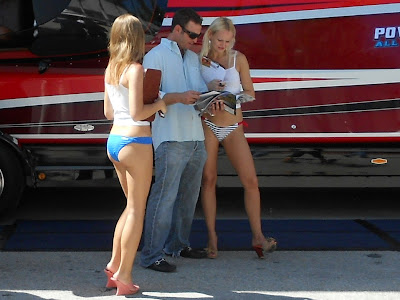 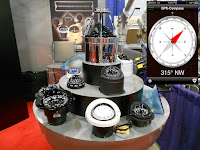 There was a nice display of antique compasses at the show which always creates a small lump in my throat. Young boaters were taking pictures on their Iphones to send to their grandparents. 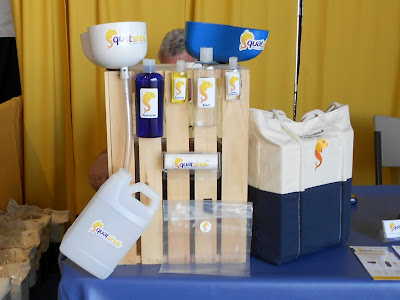 I love the carny feel of the boat show. The people with miracle tape, special glues, and waxes who entice you with their Mr. Microphone amplified pitches. But I am sad to report the chamois guy was not there, and he was missed. The thrill of being enticed with the opportunity pay $20.00 for a high tech paper towel is forever ingrained in my memory. But the good news is the the chamois guy's booth has been taken over by the good folks at Squat Shot  The Squat Shot, is a portable urinary device designed for women, and it evokes the same level of excitement I used to get from the chamois guy. It's a practical device that serves a need that isn't often discussed in public. Men can use it also, but I don't know of any that could hit a target that small, most can barely hit a full sized urinal.
Posted by Bill Bishop - Parmain at 11:26 AM