It's the most wonderful, and dangerous time of the year

"The TV won't turn on", she said, "Could you please see what's going on." "Funny I thought, it worked last week." I know this because I had just installed a KVH satellite TV system on the boat, and had checked everything out. I said, "I'll stop by and look at it." 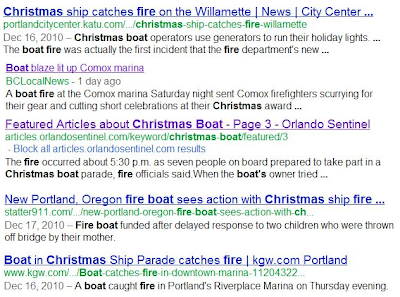 What was different between last week, and this week was the boat had been decorated for Christmas by a company that I think that normally does this for homes. So what I see first is that two extension cords were running into the cabin, and the sliding companionway door had somehow been forced closed on them and was locked. I unlocked the door, which was a little difficult because of the additional pressure on the door latch caused by the squashed cords, and went down to look at the TV. Yep, she's right, the TV won't turn on because there is no power on the port side of the boat. The port side GFI must have popped, and out into the cockpit I go. The GFI for the port side is under a cockpit cabinet, and sure enough it had popped. A quick reset on the outlet restored power, and the TV, is now fine. 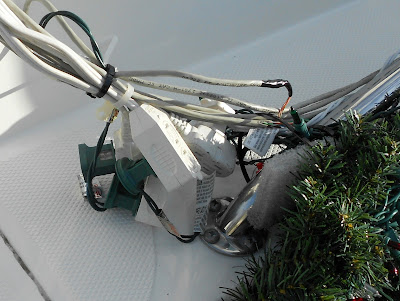 So here is what I think happened. The crew that decorated the boat used a plethora of extension cords that got plugged into the GFI, and something caused it to pop in the process. I suspect it continued to pop, and this would be a warning sign that something was awry. Since the only other power on the boat that was available, was in the cabin on the starboard side. Extension cords were used to feed lighting, and the inflatable Santa I had spotted, that was melted and airless on the transom. They didn't seen to be terribly familiar with boat electrical systems, and I started to ponder about events, and errors that could occur when boat owners start to drag out of their closet tons of Christmas lights, spinning mirror balls, waving Christmas bears, extension cords, and the other assorted detritus that comes with the ho ho season.

They string all of this stuff around their vessel to indicate their enthusiasm for the holiday spirit. This is also often driven by the yacht club's letter reminding members of their contractual obligation to do the seasonal decorating, and the fines due upon failure to do so. I think this is where the expression, "The floggings will continue, until Christmas morale improves", comes from. Did I get that right? So I did a quick survey of several marine basins this week, and came up with a short list of what to pay attention to, if you don't want to end up joining "Them's what's dearly departed", or see the picture of your boat in flames in the local paper. 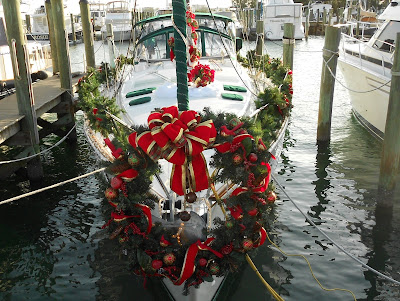 So whether your taste leans towards the lavish and baroque... 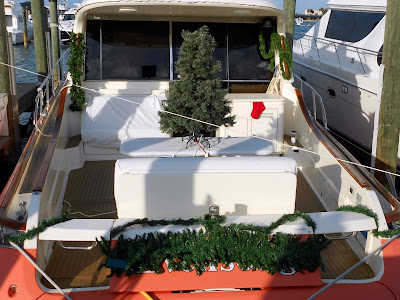 Or you take the "Less is More" minimalism approach, here are some things to pay attention to.


1. Do decorate your boat with UL approved "Outside" lighting, not inside lighting. You will find a white, or silver tag on the lights along with the UL symbol, and the text on the label will typically be red, and will clearly say approved for outside use.
2. Do plug the lighting into a GFI outlet, preferably, if possible on the dock, and not the boat.
3. Do unplug the lighting when not in use. If it's not plugged in, the boat won't burn down.
4. Do a good job of securing the lighting to insure wind, and waves won't allow it to fall in the water.
5. Do insure if the boat is going to be used while decorated, that wiring will not be a trip hazard. Tape wiring to the deck if needed.
6. Blowing breakers is a sign you are upsetting mother nature. Do not overload circuits.
7. Do unplug all systems if it going to rain, whether outside approved, or otherwise.

If you are using a portable generator for a parade or similar event pay even closer attention to safety.

1. Make sure the generator is very well secured, and the exhaust fumes are well ventilated.
2. Never refuel the generator while it's running. Shut it down first. Spills can cause conflagrations in a heart beat. Move personnel away from the fueling area.
3. Secure fuel containers well away from the generator.
4. Use a funnel, and or container with spout to reduce the chance of spillage.
5. Don't refuel if the boat is in rough water. This is a spill waiting to occur.
6. Don't have an ARI (Alcohol Related Incident). In other words liquor, gasoline, and ignition sources are likely to collide in an unfavorable manner. It's a Darwin thing.
7. Don't use a Bic lighter to check how much fuel is left in the tank. You can do this, but only once.


So use some common sense and have a safe holiday. Is that Marley's ghost I'm seeing? Bah humbug!
Posted by Bill Bishop - Parmain at 12:31 PM