There is a season, Turn Turn Turn. And a time for every boat under heaven.....

I blink my eyes, and look again. At the end of the dock is a church docking, and it's a real church that is docking. I have done a lot of checking, and this one of three powered floating ship churches in the world. There are a lot of floating church chapels, and some power boats that hold services, but only three real boat churches. 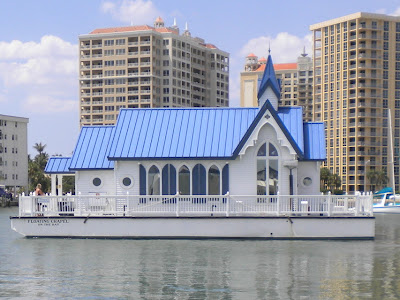 To leave no doubt about the boat part of this church, there is a console on the bow, with a Garmin chart plotter, and Raymarine ST 60 depth finder, and below decks are a pair of 125 HP Cummins diesels, and a 27KW Kubota genset. 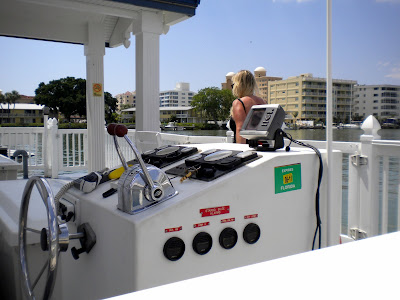 I watched captain Jerry "Orca" Fisher very deftly bring this fiberglass hulled 60' by 30' vessel into dock. The wide separation of the power train allows a surprising level of maneuverability, and she cruises at 6 knots. 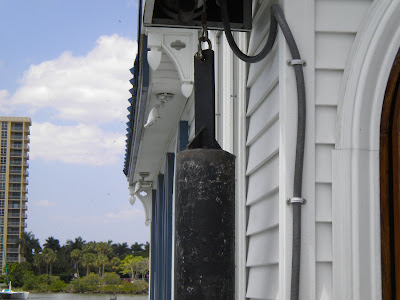 Discrete fore and aft spuds are used for shallower water anchoring (up to 10'), and additional dock side stability if needed. And now for the church part. This is a beautiful structure, and I was stunned when I walked through the traditionally shaped entry doors 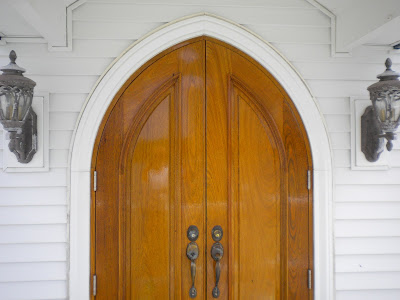 Sunlight was streaming through the stained glass windows and spraying colored light into the nave. The high lofted cathedral ceilings create a warm and spacious feeling, and the oak pews seat 100 for weddings and services. 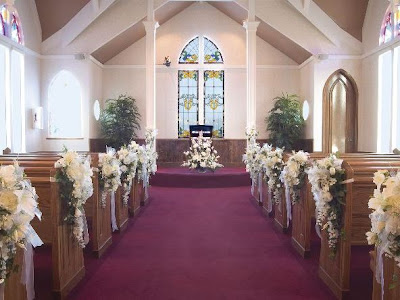 The primary income stream comes from waterborne weddings, and it is the perfect venue for this. "Captain Orca" if requested, performs marriage ceremonies in his full dress whites. The vessel also has extensive audio, and video systems including audio and video mixers, surround sound, and color monitors. I think when no one is around, and maintenance is being done, this sound system could really crank some less than ecclesiastic tunes. Just a hunch. 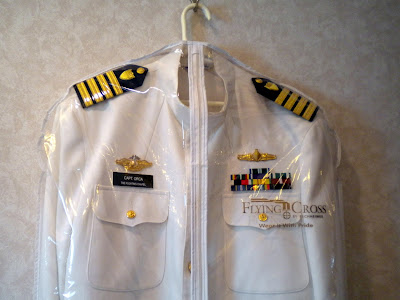 The many real stained glass windows are protected by hurricane proof glass, and this is the only church in North America that has a USCG certification period.

The vessel was originally built by Phil Henderson Sr., who after seeing a smaller version of this vessel (pictured below) during a trip to Australia commissioned the new construction. In 2004 the floating chapel was up and running, and has lived at the "Pier" in St. Petersburg, and was later docked at the Renaissance Vinoy Resort. 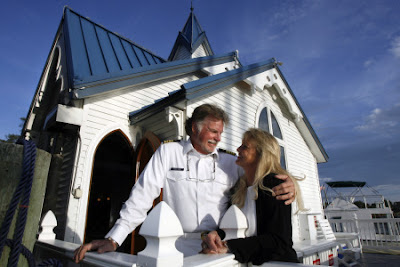 Captains Jerry, and Jill Chandler-Fisher (both 100 ton masters) are the newest owners, and are long time local live aboards with extensive boating experience. I stumbled across the boat at Marina Jacks while it was temporarily docked. It had been hiding in plain sight at the SaraBay/Ramada Marina in north Sarasota, or south Bradenton depending on your perspective, and was being briefly displaced to accommodate a large fishing tournament. 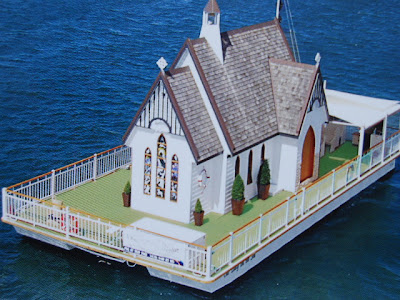 The floating church above is the inspiration for our now local "Floating Chapel On The Bay". It is operated by Celebrations Afloat. and is located south of Brisbane on the Broadwater on the Gold Coast. I tried to get some actual details on the vessel, but alas I could not find much.
The last true boat church is the eclectic Russian Orthodox Church boat the Prince Saint Vladimir. Completed in late 2004, she plies the Volga river from Moscow to its mouth. Despite the headline stating it is the "World's First" church boat, my research says it is actually the third. The clever Aussies were first, the Chapel on the Bay is the second by a nose, and the Prince Saint Vladimir is third. 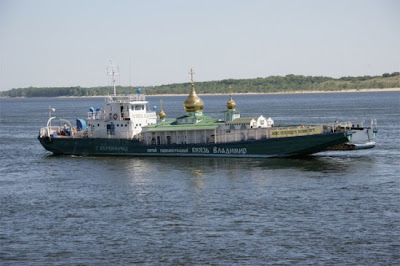 Milling around looking for info was interesting, and one of the things I stumbled across was this floating church, that was inspired by two other floating churches operated by the Seaman's Church Institute of Philadelphia, and South Jersey. This top heavy floating creation was made by lashing the hulls of two clipper ships together, and building a 85' x 37'  platform on them. The chapel was built of wood, had a pipe organ, and a 75' steeple. Construction was finished in 1848. It was offered for sale in 1853, and was purchased by the St. Johns Episcopal parish in Camden NJ. The new owners had it towed to Camden, and relocated the church onto land. The church caught fire and burned to the ground on Christmas day in 1870. All I can think is that this had to have been one scary top heavy tow, and I don't think Vessel Assist Towline services were around then. You can read a little more about the history of this vessel here. 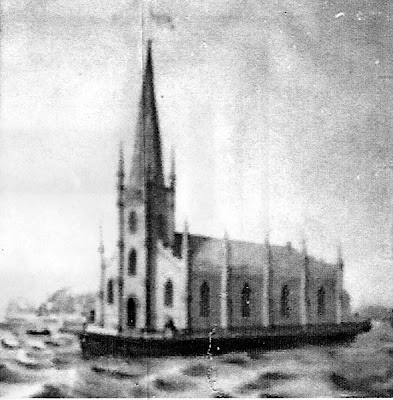 Captains Jerry and Jill, thanks for taking the time to let me visit your inspirational vessel, and I wish you great success. If you're contemplating holding a wedding in a beautiful floating tropical setting, you can find out more by visiting Weddings on the Water. The Chapel on the Bay also holds non-denominational services every Sunday morning at the SaraBay Marina.
The story opening line was a slightly modified version of Turn Turn Turn which was adapted in its entirety from the Book of Ecclesiastes. Pete Seeger wrote the music, and added the last line in 1959. The Byrds made it an international hit in 1965 when they covered it.
The photographs of the nave, and of Captains Jerry and Jill Chandler-Fisher were graciously provided by Jill, thank you.
Whew, maybe I don't have to wear that copper grounding chain dragging off my ankle the next time I go into a church.
Posted by Bill Bishop - Parmain at 5:12 PM