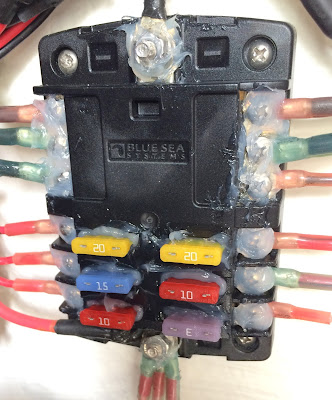 I don't know what all this goo really is but the boat builder no doubt had 55 gallon drums full of this stuff by the way they smeared it on. In the picture it looks like silicon, but it's not. It's just as gooey and slimy as  the day it was applied. I had to have paper towels to wipe off the probes from my voltmeter while checking a circuit for power. I felt like I needed a shower afterwards. A light spray of Boeshield T9 would have done the trick faster and better. 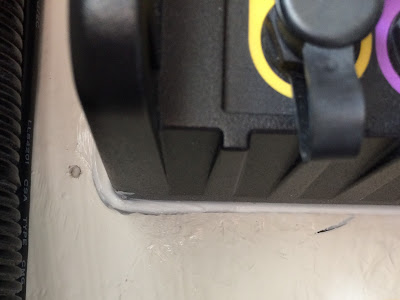 Cut hole, check. Stick gasket in place, check. Put MFD in hole, check. Screw the MFD in from the front, check. Attach bezel, check. Go behind the MFD and seal it completely with 3M 4200 or the ilk, why?


This was unnecessary. I have to remove it. If it hadn't been glued in place it would have been five minutes to drop the cables and replace it with the new one

Instead it became a 45 minute battle to extract it resulting in damage to the case in the process. I  cut as much of the goo as I could get to with a utility knife but the installer was meticulous in ensuring it was thoroughly sealed. 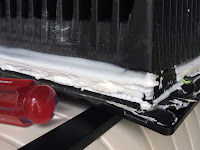 Despite the fact that the console was only a quarter of an inch thick the goo was one half of an inch thick in the places it was hard to get to, like the top of the unit where I couldn't get the utility knife in to cut it.


So what was wrong with the gasket? Nothing other than the layer of spooge copiously smeared on top of it. Nothing at all. What was this moron thinking? All things break someday and typically sooner than later when it will have to be removed. 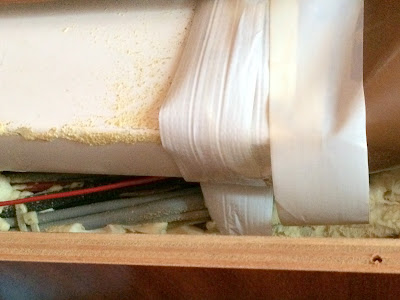 This is the last WTF moment for today. This picture is from a high latitude yacht. To translate this into americanized English for everyone this means it was designed to cruise in cold climates and hence is heavily insulated with spray foam everywhere.


Instead of  investing a few bucks in conduit almost all of the primary wiring was foamed in place. This guaranteed the wiring could never be replaced, and even worse it makes it nearly impossible to pull new wiring in.

The yacht is going through a substantial upgrade and the largest single cost is the time it takes to get new wiring from A to B all caused by saving a few bucks on  conduit. Progress on some pulls is measured in inches per hour. WTF

Yeah I know it's been a while, and I'm sorry about it. Without going into the details life and work became extraordinarily complicated, distracting and very time consuming to say the least. Things have now calmed down to near its "Abby Normal" state and posts and life are resuming. Boy is there a backlog of stuff to talk about.