The KVH system was a factory installed and had a special mount fabricated for it. The hardtop was prefabricated and wired. The top layer is the bottom of the hard top. At the factory installing the hard top was simple. The wiring coming up from the boat's interior passed through a largish hole in the bottom layer, then was fished through a hole in the center layer where they were terminated with connectors.

Piece of cake. A overhead crane picked up the hard top and hovered it over the boat. Someone plugged everything in. The hardtop was lowered in place and secured. Easy peasy except for three small problems. First is the center layer hole was now inaccessible for all time. The second one is all of the wiring that entered into the boat was tied into one huge bundle. Finally they used black electrical tape. This will make more sense in a minute.

The old dome was removed from the boat kicking and screaming. Everything was corroded from the coax connectors to the bolts holding it it place. Reason failed, force prevailed and off it eventually came. The new dome is a KVH TV-Hub system. I only have to pull one wee coax cable to the entertainment systems. I look up inside the hardtop and by golly there is a conduit going down. How unusual is that? In ten minutes the cable is hanging out of the access plate between the top and middle layers.

At the other end the access plate is between the middle and lower layers. I can see the wires at each end. I pause and realize there is a hole in the middle layer I can't see, and worse I can't reach from either end. The three wires from the original KVH install are there. I disconnected the original coax cable from the hard top and attach the new cable to it.  I try to pull it through. Zip happens. I go back to the other end and look more closely. The coax cable has been taped to the other two gray KVH wires (power and data). Sigh, I lop off their connectors and eventually after donating some DNA to the boat I painful moved my coax cable with the other two wires four feet to the other access hole. There was black tape every six inches assuring these cables are connected for life. 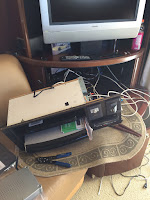 The hole entering the boat from the lower level is packed full. Twenty minutes of trying to get my wire fish through is to no avail. Okay, let's try plan B. I cut the two gray wires as short as I can.

Down below I disconnect enough wiring so I can pull out the panel holding the receivers. This lets me lay on my back and slither into this small space and have one arm free to use. I can see the three wires where they leave the big bundle. I'm able to just grab one of the two gray wires and pull it really hard. It was a measure of my frustration at the time. Slowly it slipped through all of the gooey back tape and fell through. The second gray wire came out easier. 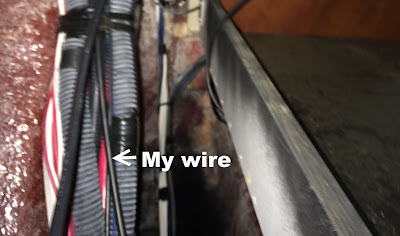 I go back up to the top, tape the coax connectors to smooth them out and lube up the bundle with dish washing liquid. Back down below I crawl back into the hole and start to pull on the coax cable. It moves and stops. At this point I don't care. I give it a huge jerk and it pops free. You can see in the pic where it exited from the big tie wrapped bundle. 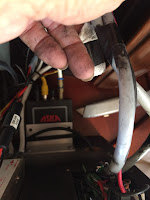 Total time to pull a single wire about eight feet. A mere 12 hours of gyrations, or about 90 minutes a foot moved.

So let me sum up what the problems were. There was no anticipation that possibly these wires would have to ever be changed. The vessel design made it virtually impossible to pull in new wiring. The pull holes were just big enough for the existing wiring and no more. Lastly using the damn black tape to tie wire bundle together is always a bad idea.

If you look closely at the picture above one of the better uses for black tape is to improvise a bandage for a slice made with a utility knife trying to cut the black tape off of a bundle of wires in the first place.
Posted by Bill Bishop - Parmain at 7:37 AM