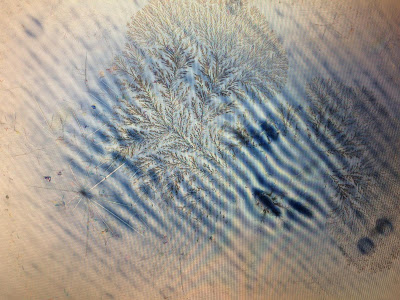 So what has really happened? Beats the crap out of me, but this won't stop me from speculating. This is a Raymarine RL 80C MFD circa 2002 with a Thin Film Transistor (TFT) LCD display that needs all kinds of mystical dark arts to manufacture. Although many are still working, most have ended up in a paupers grave. Often this a unmarked dumpster somewhere behind a shopping center.

If you blow the image up in the lower left hand corner it looks like there was an impact. You can see a star pattern radiating away from it. This may have caused a delamination that was the starting point of the problem. The ferns I think are possibly a chemical reaction that is propagating inside the layers of the display. It has a very fractal feel to it. It's dead like Elvis, can't be fixed, and is slated for replacement. It was really cool and alien looking however. 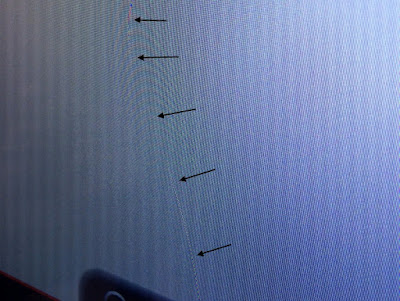 In the same marina five boats away on the very same day there turns out be another screen problem. The reported problem, like many is also infused with obfuscation. The MFD is acting up. Unlike most jobs, I have a little history to work with here.

The MFD was installed by the boat builder. The console wasn't exactly a precision piece of work. When the MFD was set in the console it rocked a bit. This was fixed by screwing it down plenty hard until it fit flush and looked good.

Shortly after the boat was delivered the display started to delaminate. There was no ambiguity about the problem or its cause. A new MFD was installed by the dealer and this time carefully installed but now has some issues. My first guess is the two MFD's have different software versions and I'm armed with the latest software. When I look though the software is current, but the new display seems to have a touch screen problem. Sometimes it seems to work, and others not so much. I used twisty knobs and the ilk to navigate around. I re-calibrate the touch screen and no joy. I call tech support and the general consensus is the MFD might be funky, send it back and install a new one. Sometimes, but not often bad things can happen to new displays.

Then I caught a glint from the display out of the corner of my eye. I play with the back lighting and squinting at a steep angle I can see a crack about 5" long, not in the top glass layer but in a lower layer. Thinking about the touch issues I played a bit more. If I touch the screen to the left of the crack, it works fine. Touch to the right and I don't have squat. Regardless of any other issues it may or may not of had it will be replaced.

Back in the days of yore ye olde MFD cases were mostly made of cast aluminum. You couldn't force a corner down flush in a wonky console without traumatic things occurring. Today many MFD's are made with plastics. I don't think this is bad thing. There is less corrosion and coating failures. They are also lighter and thinner. However you have to be more careful during installation. If you're not you can stress the case (and all the stuff in it), or break it by over tightening the fasteners. If you have to spot weld them in place with an adhesive use the right ones like silicone and very sparingly. If you use the wrong ones like 3M 5200 the MFD will come out in pieces. The plastic cases, unlike the cast aluminum ones don't like being pried out out of the console with a Home Depot cats paw.
Posted by Bill Bishop - Parmain at 1:45 PM