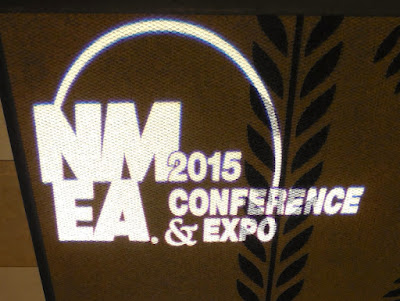 We are all on a toboggan ride down a huge mountain of technology, and with each passing second we continue to accelerate. You're reading this on a computer, tablet, or smartphone. There are now billions of these devices worldwide. Global sales of consumer electronics have passed one trillion dollars, and unit sales are in the billions.

Our purchases of this gear fuels the development and volume needed to make the technology both affordable and transferable to other markets, like our boats.

This massive volume in turn drives competition. Prices are forced down with capabilities and performance ever increasing. A simple example is the price of computer memory.

I'll do a boaty take on this. When Raymarine was manufacturing the now venerable RL80 radar in the year 2000, the average cost of computer memory was $1.12 per megabyte. When they introduced their Classic E series MFD,'s five years later memory price had plummeted to $0.018 per megabyte. 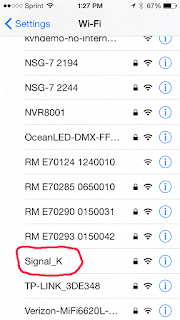 Staying with Ray again, in 2011 they introduced their e7 MFD. This was the talk of that year's NMEA conference, and an industry first. It had WiFi, and an app for it was running on a tablet. The little screen grab is showing WiFi hotspots on my phone at the recent conference.

Had this been taken in 2011, this would have been a very short list and with only one MFD, the lonely e7 on it. My phone is now seeing in order a KVH something, 2 Navico MFD's, Automated Marine's network video recorder, 4 Raymarine MFD's, OceanLED's controller, and making its first appearance, there's is Signal K. The list was much longer, that's all that could fit on my screen at one time.

The little e7 MFD was a milestone of some note. Marine tech manufacturers are a conservative lot, and are large corporations with lots of legal oversight.

We've all seen the splash screen disclosures that say if anything happens to you because of our gear, its not our fault, and by continuing you agree to this. So I imagine that when the concept of putting WiFi in a MFD came up, some attorney immediately brought up the possibility of hacking the MFD along with dire warnings of the consequences, that
SOLAS thingy, and the need to show an abundance of caution.

Fortunately for all of us none of this happened by using good design. There two things about marine tech manufacturers. They have a love hate relationship about being early adopters of technology, while at the same time a herd mentality. Garmin introduced the 5212, with the touch screen, and shortly thereafter they all have at least some variant of touch screens. Raymarine adoption of WiFi was the same, along with Simrad's implementation of CHIRP based sounders. 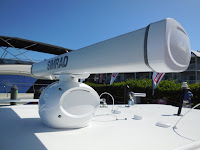 This year we had three notable leaps in technology. Simrad's Halo radar uses a mix of pulse compression, a two stage gallium nitride microwave amplifier, a very large FPGA (Field Programmable Gate Array) processor, and some impressive software. This has created a radar that easily sees a single seagull sitting in the water 60' away from the boat and has amazing resolution and target separation at long distances. 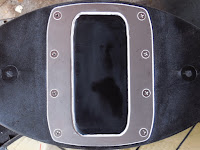 Garmin's Panoptix sonar is another standout. This is a Mill's cross style phased array steerable beam sonar system. It shows you in real time the fish as they move around under the boat.

Now add a built in internal AHRS (Altitude Heading Reference System), another first I think for a transducer and you have a stable sonar image even when you're sloshing around. If there are fish in its huge 120 degree beam, you will see them.

Last and certainly not the least is Signal K and its potential to change the industry. Signal K's capabilities including IoT applications are long overdue. The ability to free the up the nearly 900 pieces of data that circulate around on your boat's networks and make it available to app developers will drive many changes. App developers will create new ways to use your data, of which many of these will end up being incorporated by the MFD builders.

This in turn will drive more PGN's to be created to compete with good app ideas and everyone wins, especially the boaters and the boating industry. MFD's will acquire more capabilities, more apps will be created, and NMEA becomes more important as the primary source of data coming from the boats. I'm still waiting for one of the big four to be the first early adopter. Where are you?

So what's coming down the pike in boating technology? Lots of stuff. I have been contacted by two groups working on making autopilot control more autonomous, and with enhanced collision avoidance capabilities. Think of Google's driverless car technology with LIDAR and ultrasonic sensors. You don't think this tech is now affordable? Look again.

While I'm on the subject Simrad's Halo has enough resolution to do this also. If your radar can see an object, track it, and gives you collision potential information, why can't it do something about it? If only to squawk about the possibility? How about automatic MARPA target acquisition and collision warning? Why wait for the boater to manually acquire the target to do anything?


I'm thinking about building a drone landing, docking and charging station for a boat. I could use it to get overhead high resolution camera views on my MFD while navigating through coral heads, a difficult channel or doing tricky docking. It can be pre-programmed to maintain an altitude, orientation, and position relative to the boat, moving or not, and then automatically return when it needs recharging.


Enough of my Sunday morning prognostications. I'm going to put my casting bones and conical hat emblazoned with stars and moons away and watch the football games at the watering hole. Any of these things sound outrageous? They aren't. You're already making them possible.


I started out to do a more comprehensive NMEA conference but two things happened. I saw something shiny and wandered off the beaten trail, and Ben Ellison has already done a most excellent piece on the NMEA conference so head over to Panbo to get Ben's take.
Posted by Bill Bishop - Parmain at 12:14 PM