Elco's beginings started with an order for 55 electric launches being awarded to an upstart General Electric Launch and Navigation Company for use at the World's Columbian Exposition of 1893 in Chicago. This was a comptetive and contentious bid whose spec's just said 55 boats capable of carrying 30 passengers each. Two steam powered launches were in the bid mix along with two electric versions. You have to keep in mind that explosive petroleum fueled engines are still in their infancy. At the time of the bid only two boats in the US were known to have them. 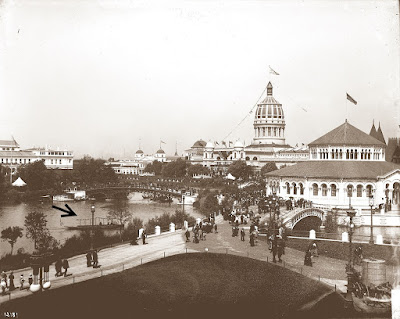 This was an auspicious start for a small boat building company and it flourished. Elco went on to became one of the premier American power yacht builders with a cachet only rivaled at the time by Mathis/Trumpy who never had anywhere near the same production volume. Prior to the first world war the company built a variety of craft including a few sailboats in the mix. During the Great War Elco won defense related contracts for over 1300 boats, primarily subchasers that carried the boat builder's fiscal ball.

The end of the Great War ushered in the golden age of wooden yachts. Elco started to produce the Cruisette line and then the yachts got larger culminating in the Flat Tops, the subject of our conversation. The great depression saw the company shrink down to three employees, but as the economy improved so did the company again.

The 2nd World War provided another boost for Elco. They benefitted mightily employing over 3000 personnel building PT boats among which was the now famous PT 109 shown below being shipped to the pacific theatre. The end of the war sadly saw 2000 workers laid off, and by 1949 Elco's doors were permanently shuttered by its parent company. We know Elco's original holding company today as General Dynamics, and their submarine building namesake Electric Boat.

So when they tell you "They don't build them like they used to." They're right, they don't, and the skills needed to build these mahogany and oak sculptures are rapidly becoming a thing of the past.

Since I touched on this briefly before. What is the difference between an Elco and a Trumpy? Not much in many ways, but primarily Trumpy's tended to be custom builds, and Elco's were built in more of a production environment. Trumpy's also generally tend to be larger, longer and beamier, and hence often the period references calling them houseboats. In both cases the quality of construction and materials used were superb.

Something else is occurring starting in the 1920's. Boat building is becoming "Standardized" and the result is boating is now far more affordable by the public. Elco is pioneering the way. The grainy screen grab above is the intro to a 1922 Motor Boating magazine issue on this subject that features Elco in the beginning of the article.

Elco's were sold and marketed much like boats today are. They had a showroom in New York city, a production factory, full service yard to support their boats, and advertised heavily. This is the birth of modern standardized boat production. This Elco flat top when new cost in the neighborhood of $25,000 in 1930. In today's' dollars this is about $350,000 dollars. To give some sort of comparison albeit not a completely fair one, a new Sea Ray 410 Sundancer has a $700,000+ sales price. 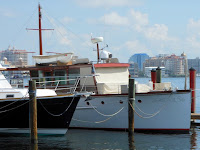 Our subject today is the yacht Duchess, formerly purportedly Lady Eileen, a beautiful 1930 48' Elco flat top. At 85 years old she looks like she was just built. My first view of this classic woodie was of a nearly plumb bow shyly peeking out on the other side of the marina basin. 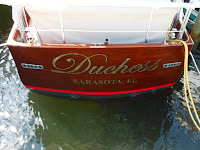 Tracking the history of Elco boats is a difficult task as I have learned. When the company closed in 1949 the important records were stored in what was believed to be a fireproof room.

When the building burned to the ground in 1963 only a small handful of records survived. These are currently being held by the Mystic Seaport Museum and no records are available online. 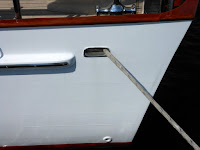 There seems to be some confusion in the press and online about this boat. After doing some digging there seem to be two boats that look remarkably similar. Lady Eileen, a 48' flat top, and Lady Elin, a 50' flat top. Further Lady Eileen aka Duchess is the only Elco 48' flat top I can find.

I searched through years of Motor Boating issues from the period and could not find any references to a 48' flat top. 42's and 50's yes, 48' not so much. That's not to say by any means that Elco didn't make a 48', just that I could find any records of it. 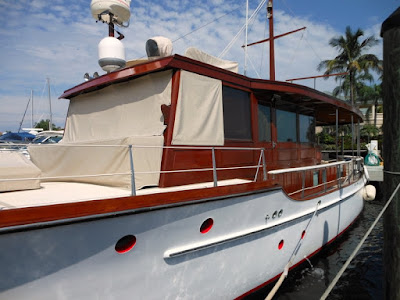 Never the less Duchess is a gorgeous period Elco in immaculate condition. The only real concessions to modernity visible on the exterior are the Raymarine radar and the KVH M3 satellite TV dome.

I suspect their locations were driven by the need to discreetly get the wiring gracefully down to the helm and main salon. 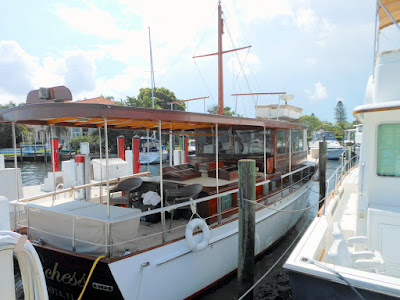 The two photos above epitomize how these boats were given the nickname "Flat Tops" The long clean horizontal cabin roof line running from just forward of the wheelhouse to the stern. This provides protection from both rain and sun.

I also love the three multi-paned port lights on the aft cabin roof and the wicker furniture which very likely would have been the preferred choice of the original owner. 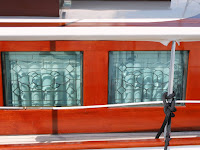 It's the craftsmanship of these wooden vessels that catches our eye. The beautiful raised panel mahogany wood work buried under layers of varnish. Leaded glass port lights. Cast bronze fittings wearing a patina that only comes from many decades of service.

Sigh, I wish they still built them like they used to. Duchess would make any marina a better place if she was docked there. 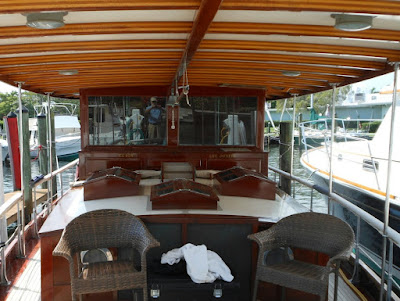 The links below provide some history about Elco

A fairly comprehensive history of Elco on Angelfire