Two hours afloat and too many things to say.

This radar installation confirmed my sense that radar beams can't see through aluminum pipes. This wasn't something I was so curious about that I would expend valuable energy in trying to test, but now I have some empirical evidence to back up my hunch.

This was two hours of owner training on a shiny new boat. Like all things I do, it seems my eye has a proclivity to spot other things and events to talk about and today was no different. The radar problem was evident as I walked up to the boat. It's a FUBAR install. It's not my work and I can't do anything about it today so the training will go on anyway.

I try to beat the basics into owners. My approach is to make the owner push all of the buttons, and we are going to do some things over and over until it starts to approach second nature. Make waypoints, name waypoints and go to waypoints. Make tracks, save tracks, name tracks and follow tracks. You get the drill. Add to this autopilot 101 use, and a stern lecture that bad things can happen if you do dumb things with the autopilot at high speeds. In extreme cases you could end up precipitously leaving the boat and watching it recede into the distance while you contemplate all of the mistakes you have made in your life, this last one in particular. I cut this educational activity off at about two hours max. It's all normal mortals can absorb in one shot.

This radar install wasn't the builders best piece of work. It's one of my favorite boat lines. In general their construction quality and design is way above average, and this version is no exception. But this installation engenders a couple of questions. So just to clarify, the aluminum rail or whatever it is was seriously obstructing the radar's forward view. In fact this radar would be hard pressed see an aircraft carrier 100 yards in front of the boat. I'm asserting that this isn't a good thing.

The first is should boat builders do marine electronics installs, especially if they don't have a lot of experience in the mystical arts of dark marine electronics magic? I think what happens too often is someone who works in a boat plant, doesn't own a boat, and can't actually use the gear is told to put the stuff in. The right answer to doing good builder installs is having someone who is specifically trained to do so, or have an outside contractor do the work. This radar install cries out for this need.

The second question is should boat builders partner with marine electronics vendors? Sure methinks, but I would be wary of shipping to dealers boats loaded with a specific brand of electronics, and telling them to just sell it. A good chunk of the boat buying public already knows what electronics they would like to have. Having all of the electronics pre-installed in boats makes them more difficult to sell. I've ripped out and replaced tons of new brand X gear and replaced it with new brand Z gear. It's an expensive margin eating proposition for a boat dealer.

At some point down stream I'll talk more about this but there are other subjects I stumbled across  during my two hours of boat training. 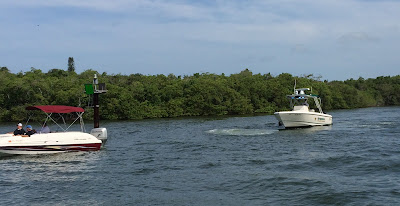 The scene was self fulling prophesy at it best and worst. This is one of several local "Slow Speed, Minimum Wake Zones. "The state of Florida vaguely codifies boater's behavior in these locales as: "Areas where vessels must be fully off plane and completely settled in the water. Any wake created by a vessel in one of these zones must be minimal (very small). If your vessel is traveling with the bow even slightly elevated while in one of these zones, it is not proceeding at "Slow Speed" as required by law."

We're following behind the sheriffs boat heading north when a deviant wave maker is spotted by him about 1/2 mile in front of us. He grabs the binoculars and studies a boat that has just passed the "Minimum Wake" signpost at the start of the zone. He stores the binoculars, throws the bumpers over the side, lights the boat up, and does a very low speed OJ Simpson style chase to intercept and nab the alleged perps.

Here is my view of what I saw. The boat had been clipping along at maybe 20, and dropped the throttles way down as it entered the zone. The issue I struggle with is the very vague definitions both boaters and law enforcement have to contend with. The factors mentioned are the boat must be fully off plane, and this boat was. It must be completely settled in the water. And again this boat was. The bow can't even be slightly elevated, and although this is shaky visual determination I would say that this boat's bow was not elevated.

Lastly the wake must be minimal (very small), and this is the problem. I understand the rules that are involved if the sign says Idle Speed Only, No Wake given some caveats about the minimum speeds required to maintain steerage, and headway. But what's a minimal wake? We know it's not a tsunami, but what does minimal really mean?

This definition varies widely. Lake Chelan in Washington state says 6" is the maximum wake size in this zone. Palm Beach County says "This means no "white tops" are showing on your wake, but makes no mention of size. Nor is the actual speed for a slow zone ever really defined anywhere.

The bottom line is this is all a very subjective call. The sheriff was making an initial judgement from at least a half a mile away via binoculars. I saw no radar gun being used so he had to be guessing about the actual speed. There is no way to measure actual wake size so again this is a visual guess.

What happen to the three older perps? I have no idea. I saw what the sheriff saw and my guess is the boat was at the very worst just ever so slightly above the very fuzzy limits, but I would hardly have described it as flagrant. I hope he just gave them a short lecture and let them go on their way at a slightly less glacial pace.

I think it would be a good idea to put video cameras on waterborne law enforcement boats. It would be fun for an attorney to ask some pointed questions in a courtroom about these issues using the actual video. Is that in your opinion a 3.7" or a 3.8" wake we're looking at in the video officer? You didn't have a radar gun, so how did you determine the speed? What exactly is the maximum speed allowable in this zone? (BTW the Sheriff's radar wasn't turned on either. It's a USCG rules 5 and 7 thing. They should set a good example for all.)

For drivers of go fast boats loaded with bikini clad vixens I would change your chart plotter units to knots. Yeah I know it makes your boat seem like it's not going as impressively fast when you use knots instead miles per hour. But when you're arguing with the judge about how fast you were going I would sure use knots. He might even think you know something about navigation. Also mention you love Manatees, that might also help tip the scales of justice.

Wait! Stop! Turn the boat around and go back. I know this beautiful little boat. It's a Alberg designed Triton. Not only is it a Triton, it's the second one built by the Pearson Bros and is the first fiberglass production sailboat to appear in a boat show. In particular the 1959 NYC boat show.

I wrote about this little boat a couple of years ago without knowing the full story about it. Rant readers, and eventually the current owner helped me fill in the blanks. It's a beautifully restored and evocative historic sailboat. It was a joy to see it heeling on the bay. 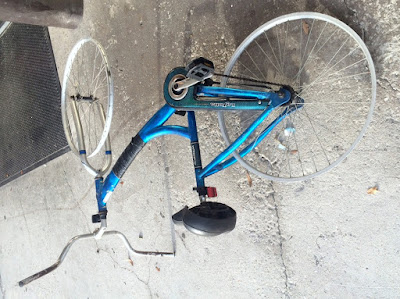 This is the last stop of my outing. I like both function and form and do some musings the subject from time to time. Hence I was immediately struck by this transportation contrivance that was ridden to the convenience store where I was buying petroleum juice for the truck. It worked just fine in a minimalist way despite the lack of tires, handlebar grips, and a kickstand. It just goes to show that you don't need form to get along in life, but it's nice if you can have a little from time to time. The bike does have a seat.