The client wanted two things. The first was satellite TV and KVH TV1 fit the bill. It's small, easy to install and supports up to eight receivers. The second goody on the list was improved WiFi access. Although the home port has adequate WiFi service they have discovered many marinas do not. Based on Ben Ellison's Panbo assessment of WiFi systems I chose the Rouge Wave Pro. It works better than my most optimistic expectations. I'll talk about this a bit later.

Then it became a case of in for a penny, in for a pound. The original flat panel plasma TV was okay, but just that. Measurements are taken, and it's new TV shopping time. The end result was a Samsung 5500 32" Smart TV with WiFi. Smart is an understatement. Built in browser with some clever techniques that let you use the remote for URL and search entries. Easy short cuts to Netflicks, YouTube and the ilk. It's very thin, and looks sharp in its new home.

So now we have a big chunk of the pieces in already in place to create a truly connected boat. I've added a Raspberry Pi 2 Model B to act as an interim Signal K server and it's now connected it to the Netgear router. The two yellow boxes will turn blue in time. I have the Arduino and will install it downstream. It will be used to test some Internet Of Things control applications and the system can be used to test prototype gateways when they become available. This is one of two local systems being installed. But this is all for part two. 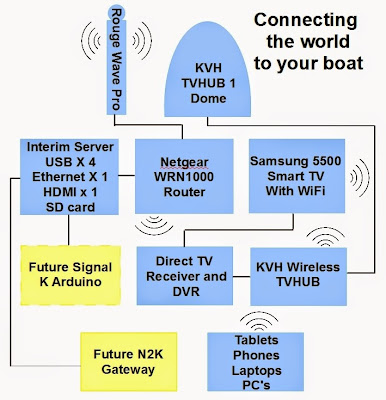 The first tasks in this little project are to get the stuff that need to go on the roof in place and the cables pulled in. The KVH dome and TV wouldn't cooperate and fit on the table but the other stuff there is important.  I ordered the Rouge Wave with the 50' Ethernet cable. the normal 25' cable wasn't going to make it. So the next question is why the Rouge Wave Pro instead of the just the Rouge Wave? Don't they do the same job?


The answer is yes, but the Pro has a stainless base and I want to use a standard antenna mount so it can be tipped down for bridge clearance. The regular Rouge Wave is designed to be rail mounted and won't work well on this boat. 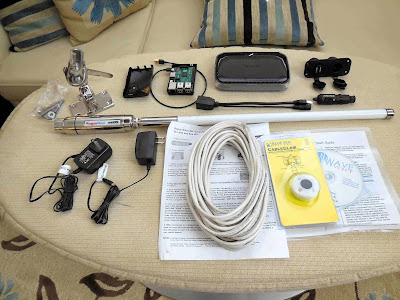 The other things on the table are the Netgear router (top center) and the Raspberry Pi is to its left. The Rouge Wave antenna and base is in the middle, and there are a couple of transformers I'm going to do a hack and slash on to wire directly into 12 volts. A cable clam will be used for the watertight Ethernet cable pass through.

That little split cable below the router is the PoE (Power Over Ethernet) cable. The Rouge Wave Ethernet cable plugs into the big end. The other two smaller cables are for ships power and connection to the router.

All in all it's easy to install and the instructions are very clear. The only technical nuance is you will need an ohmmeter to identify the wire that goes to the center pin of the two transformer wires you're going to cut off .

The center pin of the connectors are the 12VDC positive. One is for the router and the other is for the PoE injector. Don't screw this up or it's likely bad things could happen. Or so I was told....

I used the Lily 101 antenna mount because it has a slot instead of a hole for the cable. The Ethernet cable's RJ45 connector isn't large by marine standards but it won't fit through most antenna mount holes designed for a small round cable.

Yeah, the cable will fit through a hole if you need it to, and to do so cut the connector off, strip the cable, organize all those wee tiny wires, and have a crimping tool. Get something like the Lily 101 mount instead and save yourself the grief and time.

One last install detail. Above is the bottom and business end of the Rouge Wave unit. The Ethernet cable plugs in here and it isn't very well protected. The solution is to carefully seal the area where the cable exits the mount with clear silicone goop.

Add the 12VDC power to the PoE injector and plug it into the router. The mechanical install part is now done.

My next step was to take my lap top and WiFi connect to the router. Open a browser page (I tried both Chrome and Internet Explorer) and type in http://wavewifi.com and you get the page you see a piece of above. Pick a site and connect to it.

Does the Rouge Wave work well. My answer is yes. Extremely well. My laptop could see about 5 hot spots. When I connected to the Netgear router I could see about a dozen. With the Rouge Wave inline I saw over 40, a couple of which I know were well over two miles away. Now that's not to say they all had enough signal strength to use them all, but it was amazing to find out how many it could see 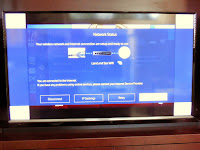 At the macro level you connect to the router, open a browser page, and from there you connect to the hot spot of your choice. Once this is done all the other gear just connects to the Land and Sea router. This can typically be done with most mobile devices. My iPhone 5S did okay when I used Chrome. I haven't tried it with Safari

The home marina uses onSpot WiFi, and the signal was strong. Once set up the Samsung TV easily connected and it allows for the entry of a router password. It easily streamed videos from You Tube.

The boat then moved to another local marina, again using the onSpot Wifi system, and a issue appeared. This marina was using a 2-step authentication system. Log onto the router with a password, and then the system sends a second browser/popup page and asks for a second password. This worked as you would expect it should on my laptop, but neither the two iPads, nor the phones on the boat received the second page.  According to onSpot WiFi there is a work around for this, but the local marina staff had no idea how to do it.

My conclusions after this little adventure in marina connectivity land is that boaters who frequently use different marinas would be well advised to have a laptop handy in case you run into the 2-step problem. I did some Googling and found that when using the 2-step process in hotels for example, a lot of mobile devices suffer this same problem. The second password page never appears. In the end my sense is that whatever marginal improvement in security you might get with a second authentication is offset by the inconvenience caused by not being to log on with the now ubiquitous tablets and smart phones.

This was a first time install of this gear for me, and it went well. I did need some modest tech support to get straight on some of the details and received excellent assistance from onSpot WiFi, Land and Sea WiFi, and WaveWiFi.

As a last note a typical Signal K system will only require a router to provide local coverage on a boat. The $35.00 Netgear used router provides four bars of signal strength everywhere on this boat. That being said I can see some scenarios where it could improve connectivity between boats.

Many thanks to the Whitney's for allowing the use of their vessel for beta testing on behalf of the Signal K project. Too few truly enjoy being on the leading edge.