There is nothing quite like the Fort Lauderdale International Boat Show. Three million square feet, almost 70 acres of boats. The odor of out-gassing styrene is omnipresent, and what's that other sweet smell wafting in the air? Ah yes, I recognize that elusive and ethereal scent, its money. You want a big boat? A really big boat? Then FLIBS is the show for you. 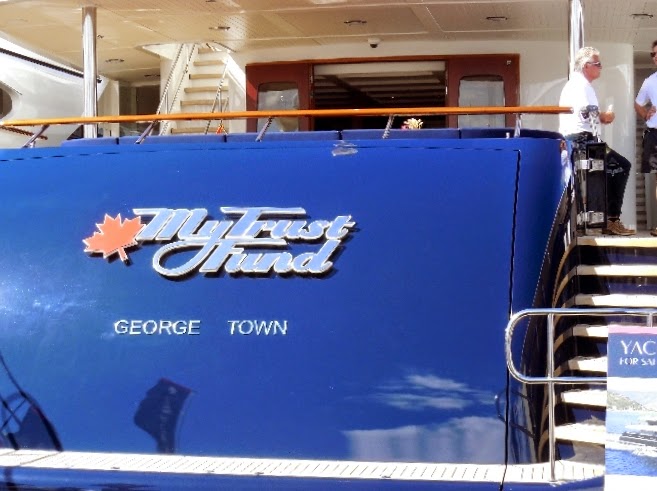 How many big boats were there? It's a good question. I ground through the listings and came up with over 130 boats starting at 100' and topping off at nearly 200'. If they had been parked bow to stern it would be over a three mile walk past their slab sided fiberglass hulls to see them all.

I didn't get to board a single yacht. The dismissive snort from one of the many smartly coiffed, but heroin chic slender hostesses was enough to send the message. I don't understand why? I had my scruffy boat shoes on. This is the quintessential hallmark of a true boating professional, and my shirt had a collar with no hot dog mustard stains on it..... yet.

What do these things cost? I have absolutely no idea. None were sporting stickers with the "Boat Show Special Pricing" on them. I suspect the answer is that if you have to ask in the first place, you can't afford it.

There are four large tent like structures dedicated to yachting. Don't confuse this with boating, they are two different things.

If you're yachting you're riding on the boat. If you're boating you're driving the boat. Translated this means while yachting you can have all of the Dark and Stormy's you want. The boater not so much, or at least that's the going theory.

You notice immediately when you enter one of these areas, that all of a sudden it's much quieter. Personnel speak in hushed tones. There is no hawking of boat shoes and German glue here. I would describe it as being more rarefied and upscale.

I try during my visits here to spot trends that I think may be up and coming in the yachting world, and I think I have found a few notable entries. 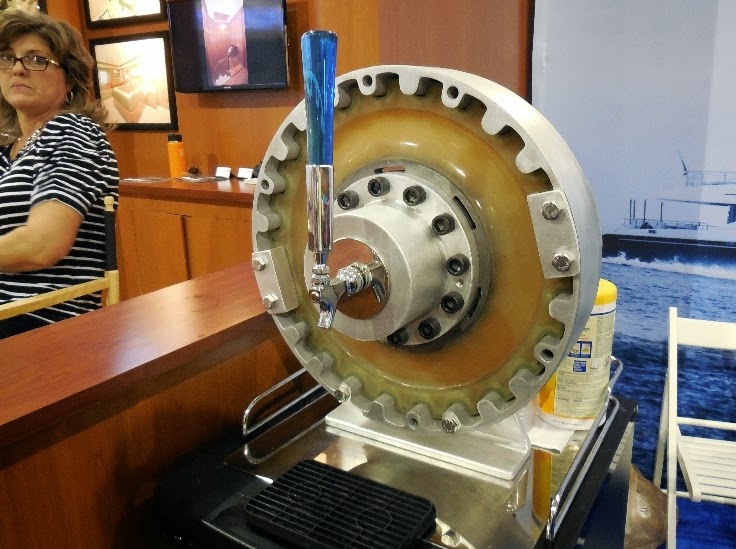 The first is what I'm calling the Tranny Kegger. Purportedly this is made from parts of a yacht's transmission, and it looks like it weighs a ton.

There must be many broken yacht transmissions laying around everywhere because I saw another one. This is about as close as you can get to going viral in the yachting world. I'm not sure why the women in the photo was so aggrieved, but in retrospect I shouldn't have been so exuberant at finding this unique yachting treasure. 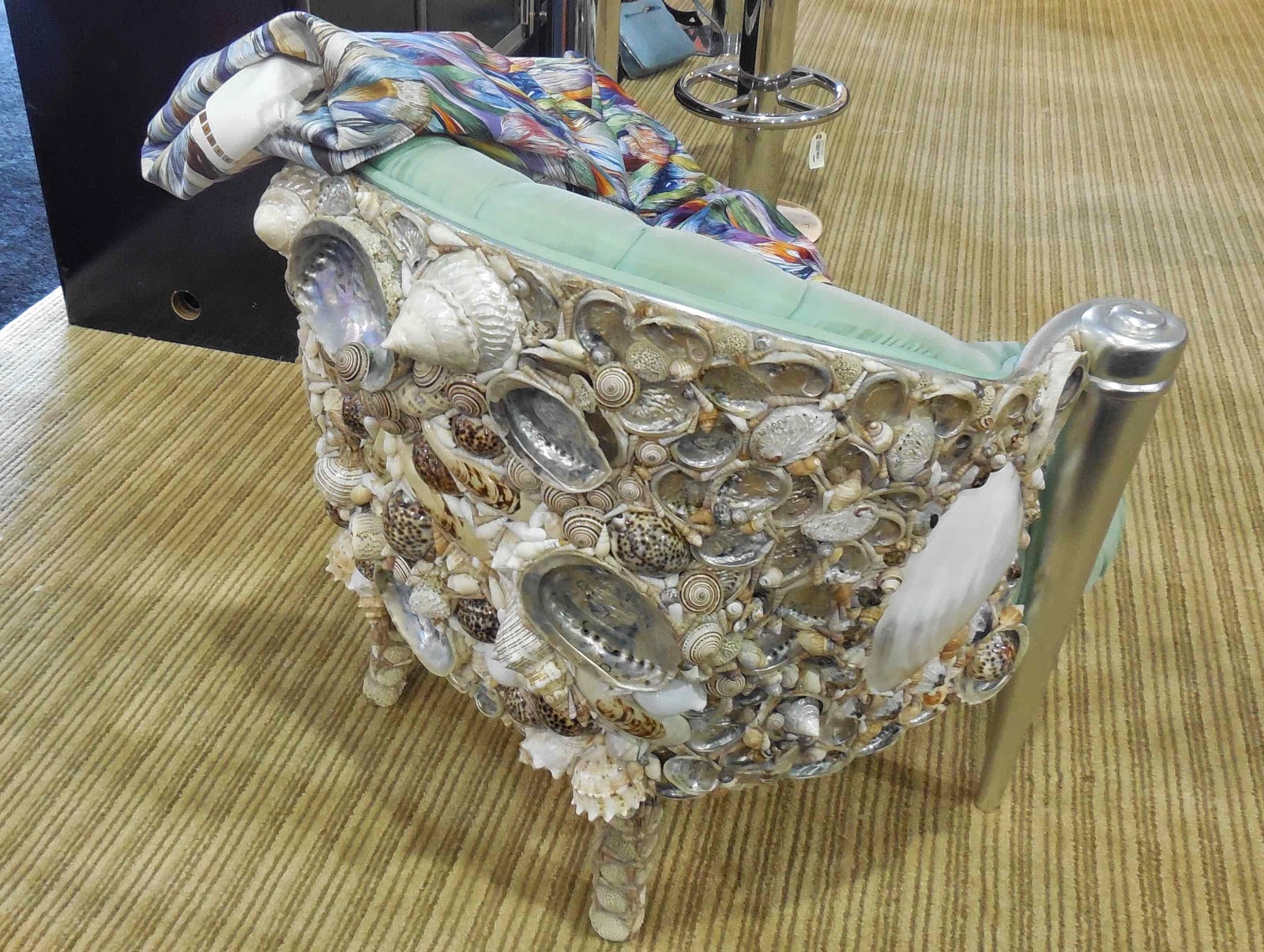 Interior design is an important part of yachting today and this is a very interesting furniture element. I noted all of the spiny, craggy and sharply pointed shells created by mother nature.

This was promptly followed with the fleeting thought that I wouldn't want to run into this richly textured chair in a dark salon while looking for the Grey Poupon mustard. I think it would have been better if the designer used Escargot shells because they are roundish, smooth and safer.

Escargot shells would also make a visual statement about an owners epicurean preferences. Saying "I eat snails" indicates to all a yachtsman's fine taste world wide. 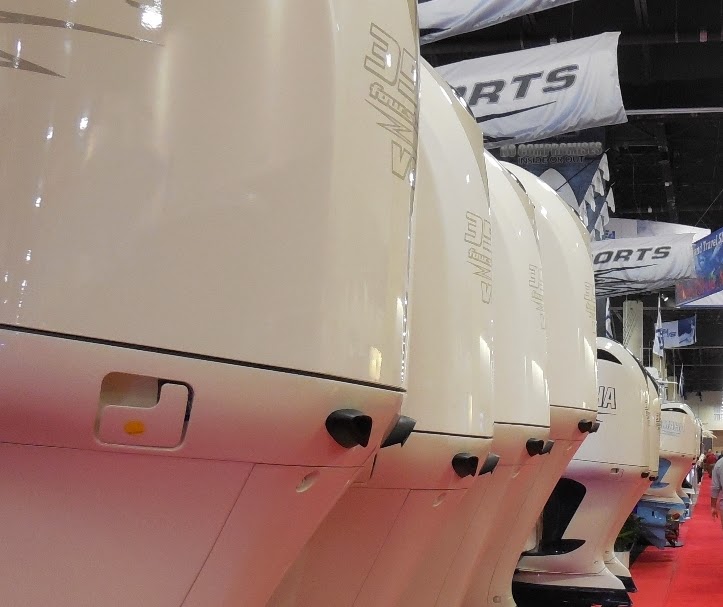 White is the new black for outboards, and it's about time. I don't know what engine manufacturers were thinking by using all of those dark colors, especially black. You can fry burgers on a black engine cowling on most summer days in Florida.

It's like buying a black Porsche, and then complaining that the AC doesn't work well enough, and your sweat is staining the leather. You can now throw those oven mitts overboard.

Oops, once again I've been distracted by shiny things. I'm actually here to do some serious journalism work, and a publisher has picked up my meager expenses. My day starts about an hour before the show opens in the electronics tent. There is plenty to see. As usual I don't do product reviews here, so I'm just touching on some of the highlights that intrigued me. 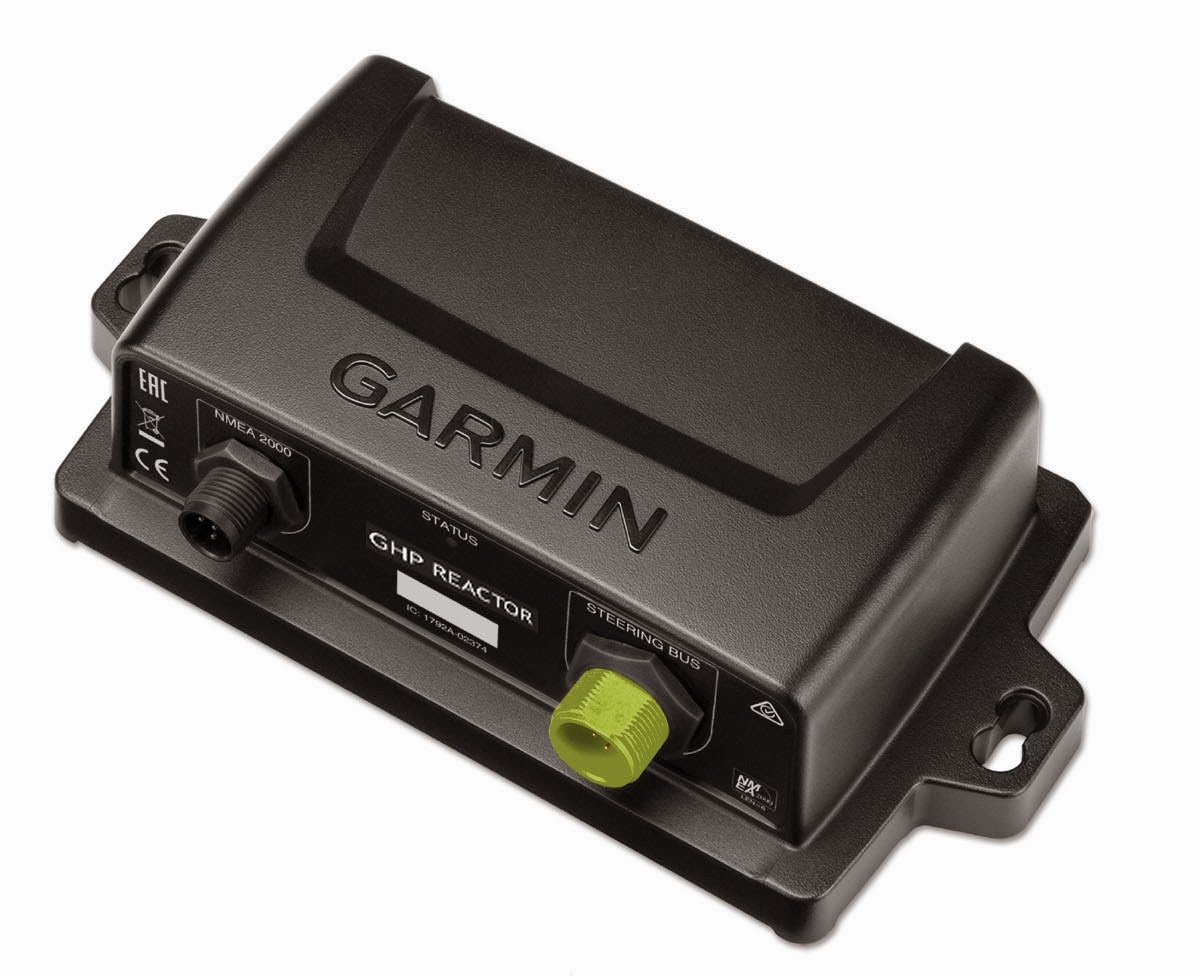 With over forty new products being announced Garmin is my first stop. It's a big list. To the left is their new Reactor autopilot controller that's replacing the older baseball shaped CCU unit. It's an excellent example of corporate technology transfer from their aviation group to the marine group.

The echoMAP series now all supports DownVü and the larger 7" and 9" units additionally support SideVü  transducers. Add to this list a series of in-house developed transducers. That's just scraping their new products surface. I'm going to be installing some of this new gear shortly, and as I do I'll comment on the tech. 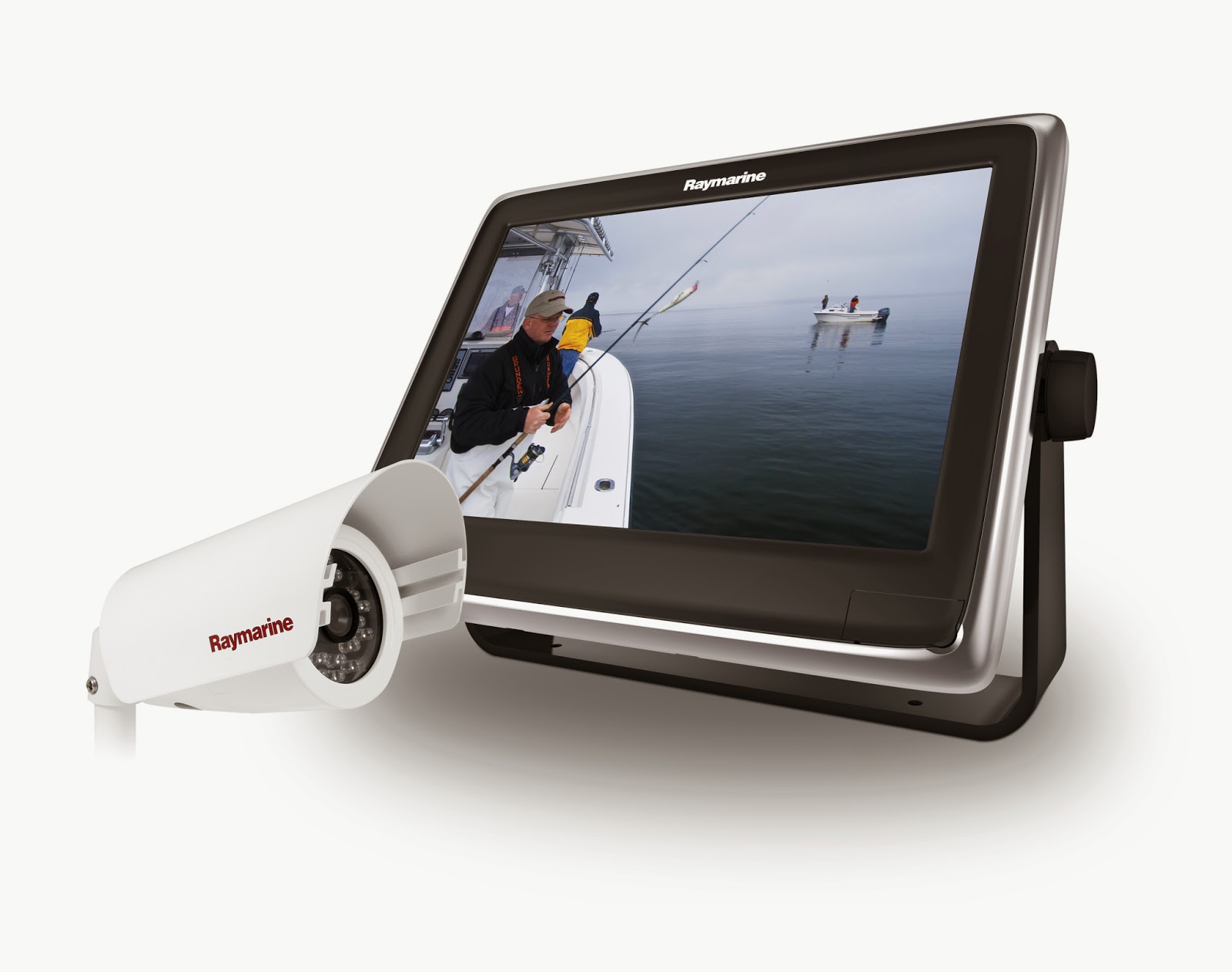 Raymarine was showing off their new CAM200IP (Internet Protocol) camera. Panbo's Ben Ellison has done a great article about it. It records video giving you an onboard high rez action camera for saving your adventures.

Also being debuted was their revamped VHF radio product line including the full featured Ray 70 VHF. It has a built in GPS, AIS receiver, loudhailer and best of all it has NMEA 2000/0183 connectivity. 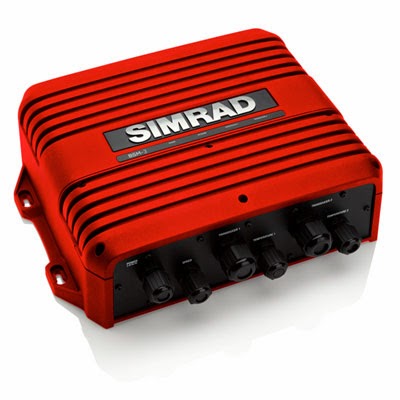 The BSM-3 CHIRP sounder module is Simrad's redesigned replacement for their original ground breaking BSM-2 unit. It supports the new Airmar wide angle CHIRP transducers with plug and play ports and has a depth rage of up to 10,000'.


Their new forward scan sonar technology was being prominently displayed, and you can read about Ben Ellison's recent testing of this very interesting tech in Baltimore Harbor. 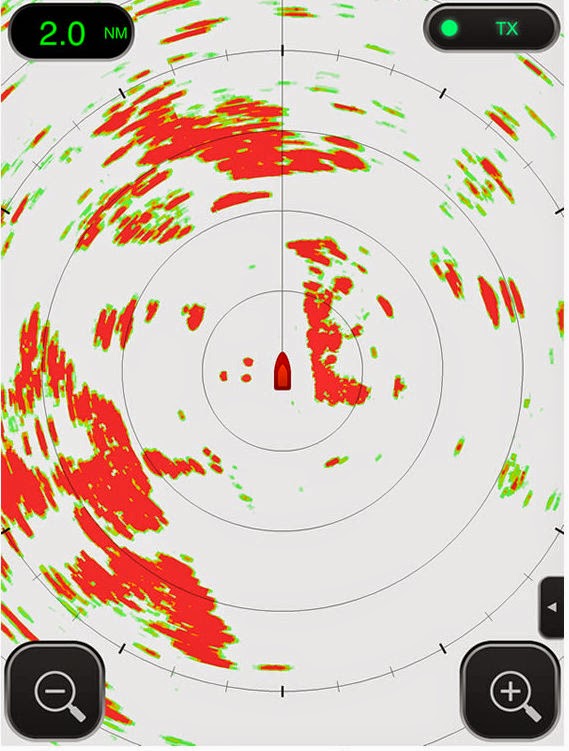 Topping off the list was Furuno's wireless radar system. The only wire going to the radar is for power making installation easy. Now connect with any iOS mobile device and you're in business. A crisp display, lots of features, and you can connect two devices at a time. Very clever, and a indicator of how important these devices will become in the future.

The Miami Boat show in February is my next major boat show. We'll see what's in their underbelly.
Posted by Bill Bishop - Parmain at 11:05 AM