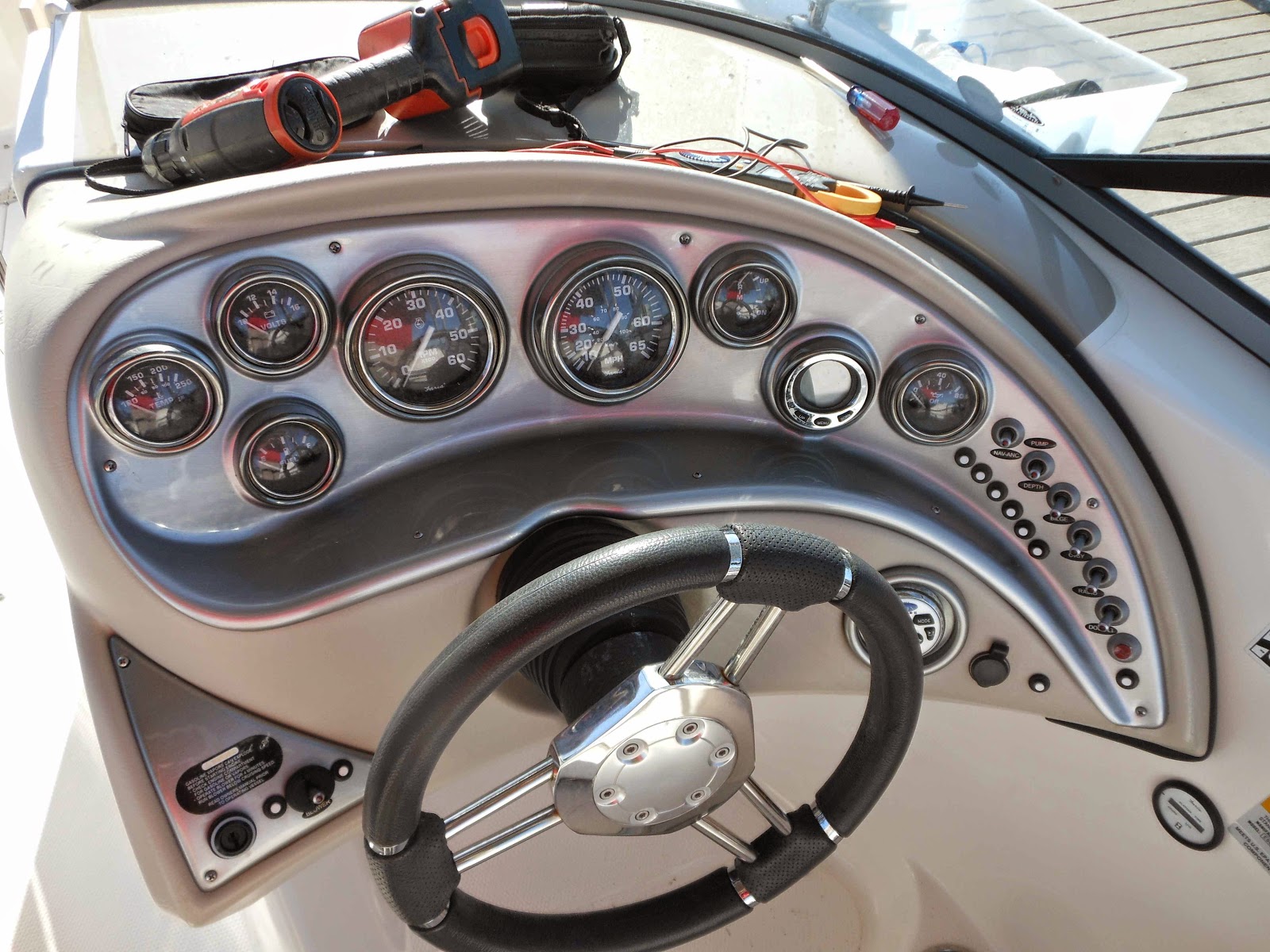 According to the owner some switches had stopped working, at least on a regular basis. This normally isn't a complex issue, and the owner had even correctly divined what the problem likely was, but couldn't get to the back of the dash to rectify it. A call goes out to the dash removal enigma detective.

How hard can this be? Remove the screws around the edges and lift it right out. Check the switches, connect or replace as needed and you're done. 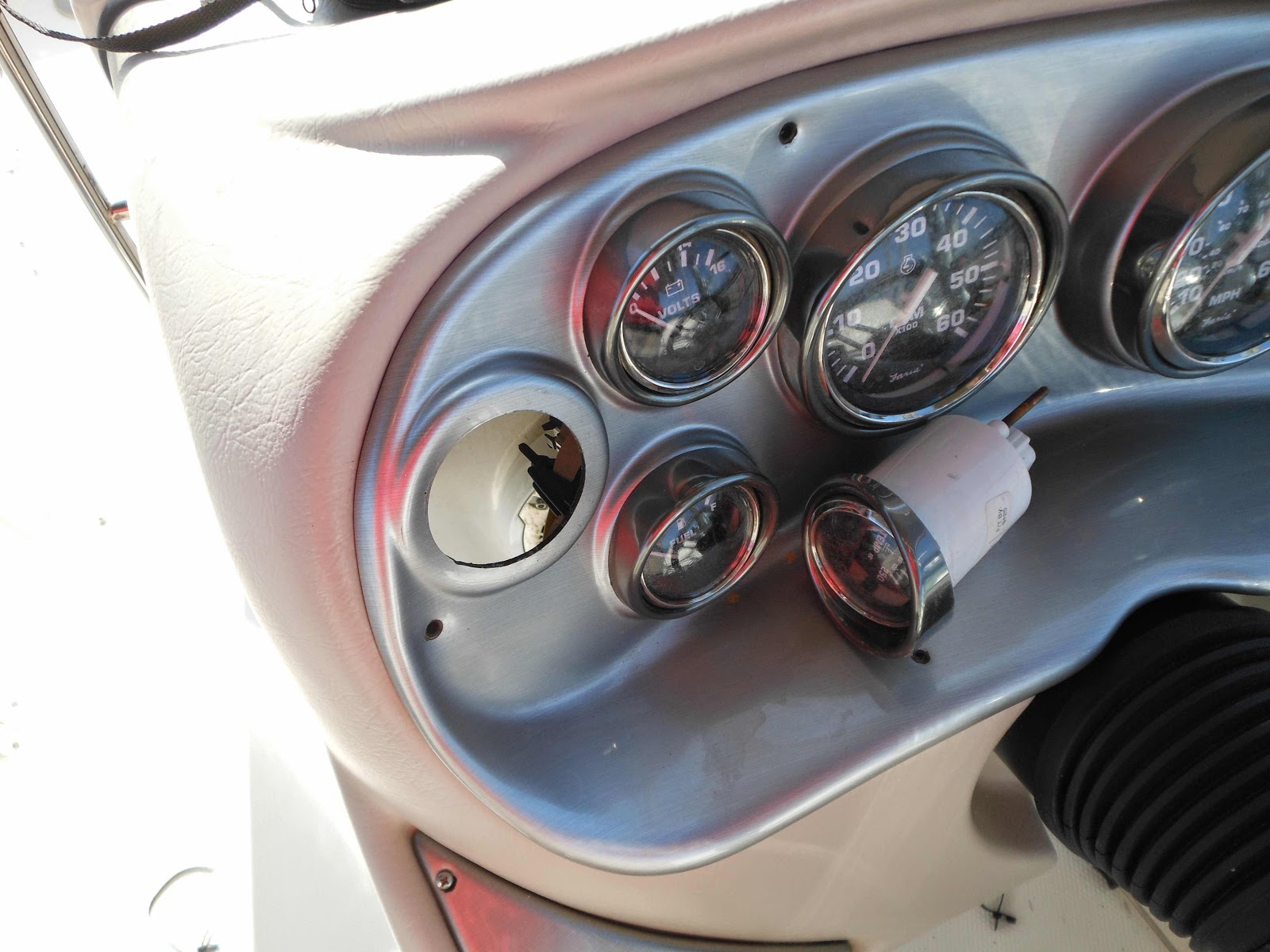 The designer had the exact measurements for the gauge because the hole is sized correctly. The cut out for the panel was cleanly done implying a template was used.

Since all this modern technology had been applied to the design, I'm sure the first installation was a bit of a surprised to everyone at the plant. The problem isn't the actual gauge, it's the bracket used to hold it in place. The bracket makes the temperature gauge too wide to fit through the cutout. 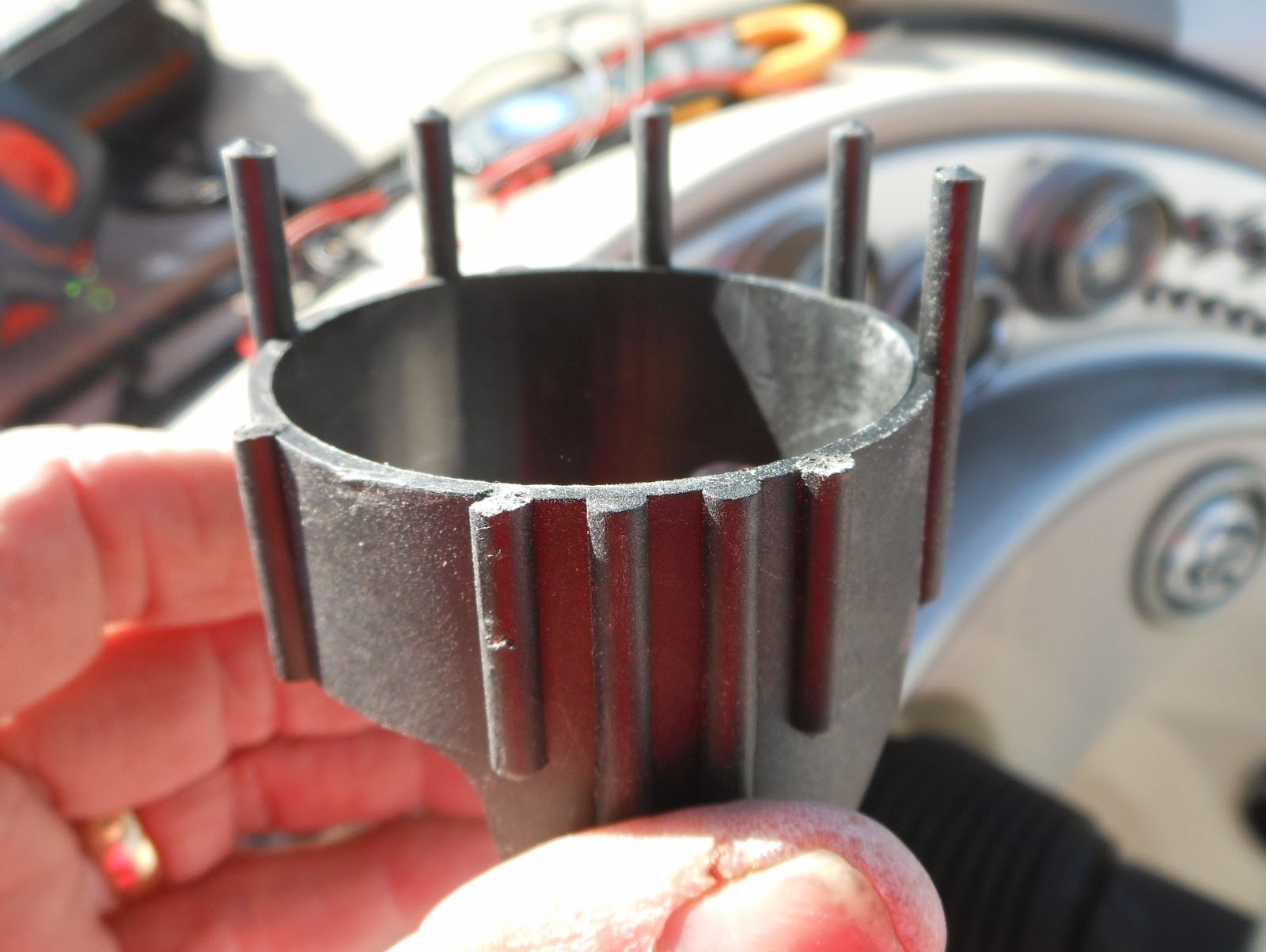 I can only assume after some scratching of heads a solution was found. The answer is you put the dash in, and then install that last instrument. Piece of cake. All you have to do is cut off half of the bracket's standoff spacers. By feel with one hand you pass the cable through the bracket and then push the cable out of the dash's hole.

Now you can plug in the gauge and slide it into the hole. Again by feel, since you can't really see it, you then orientate the bracket and slide it over the two bolts. You know you have done it right because it will only go on one way. Now find the nuts and washers and install them with your fingers. Check and adjust the gauge orientation, snake a small socket wrench up to the location and tighten the nuts. Easy peasy in a brailler sort of way. 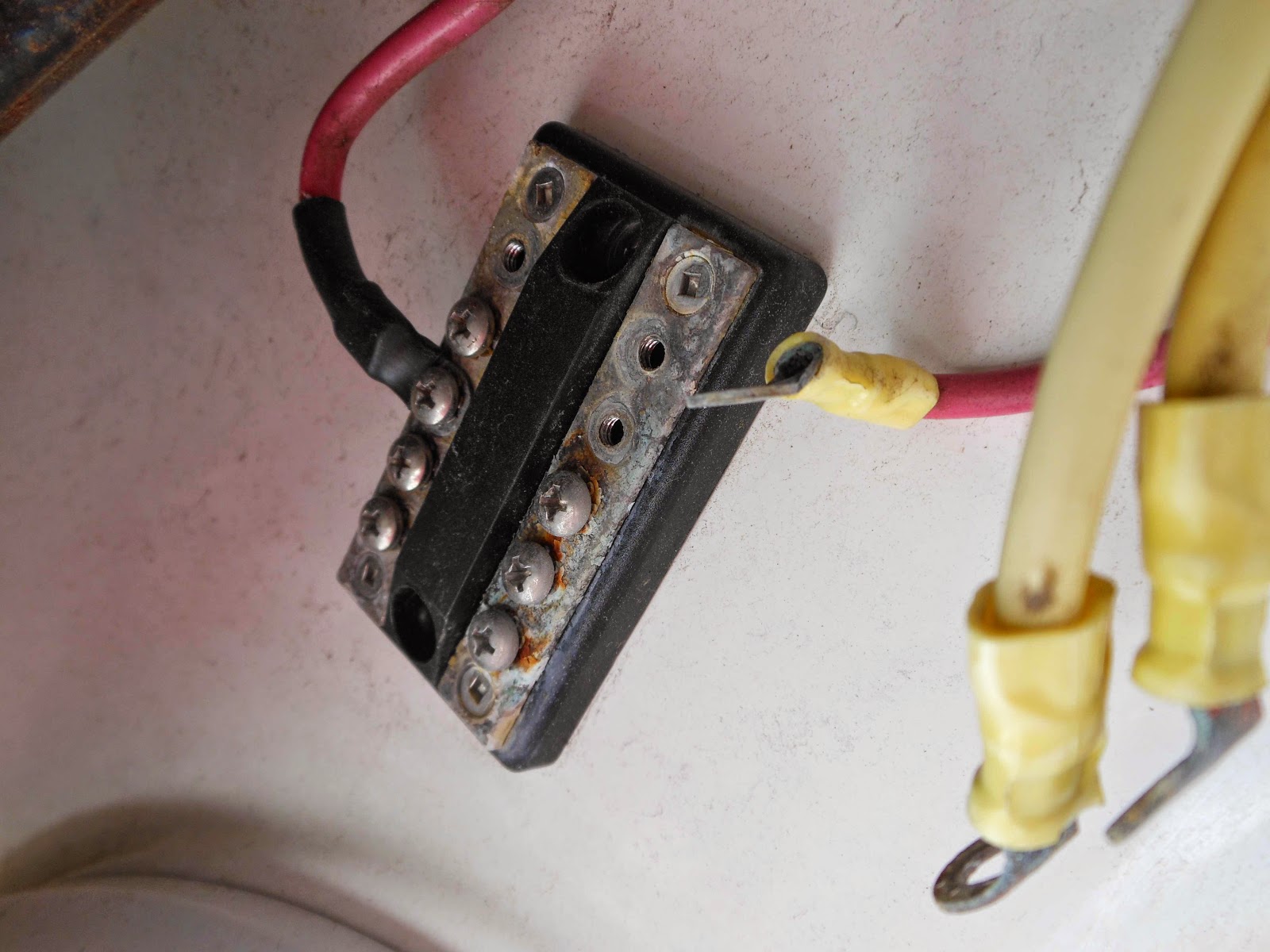 Good now the left side of the dash is free, but I can only pull it out a couple of inches, what now?

What I normally encounter is the dash harness typically is connected into one or two large plugs that includes the power and ground leads. In this case it didn't. The answer was the dash panel was put in place and the power and ground wires were attached to a small block that was installed up high under the console.

The wires were just long enough to reach the block. Wire is expensive you know, and you don't want to waste it. The supervisor is watching. Okay I think with a grimace, they have to come off also, and they do.

The stupid panel comes out a bit further, and stops. "What now?" I crawl under and find the wiring has been strangled to death with tie wraps. Nothing will happen until a couple of dozen ties meet my nippers and rain down on me. Now the damn thing will come out, sort of. Lifting up on the left side, while pulling it a bit up and to the left while helping the harness to slide out it finally sees the harsh light of day. 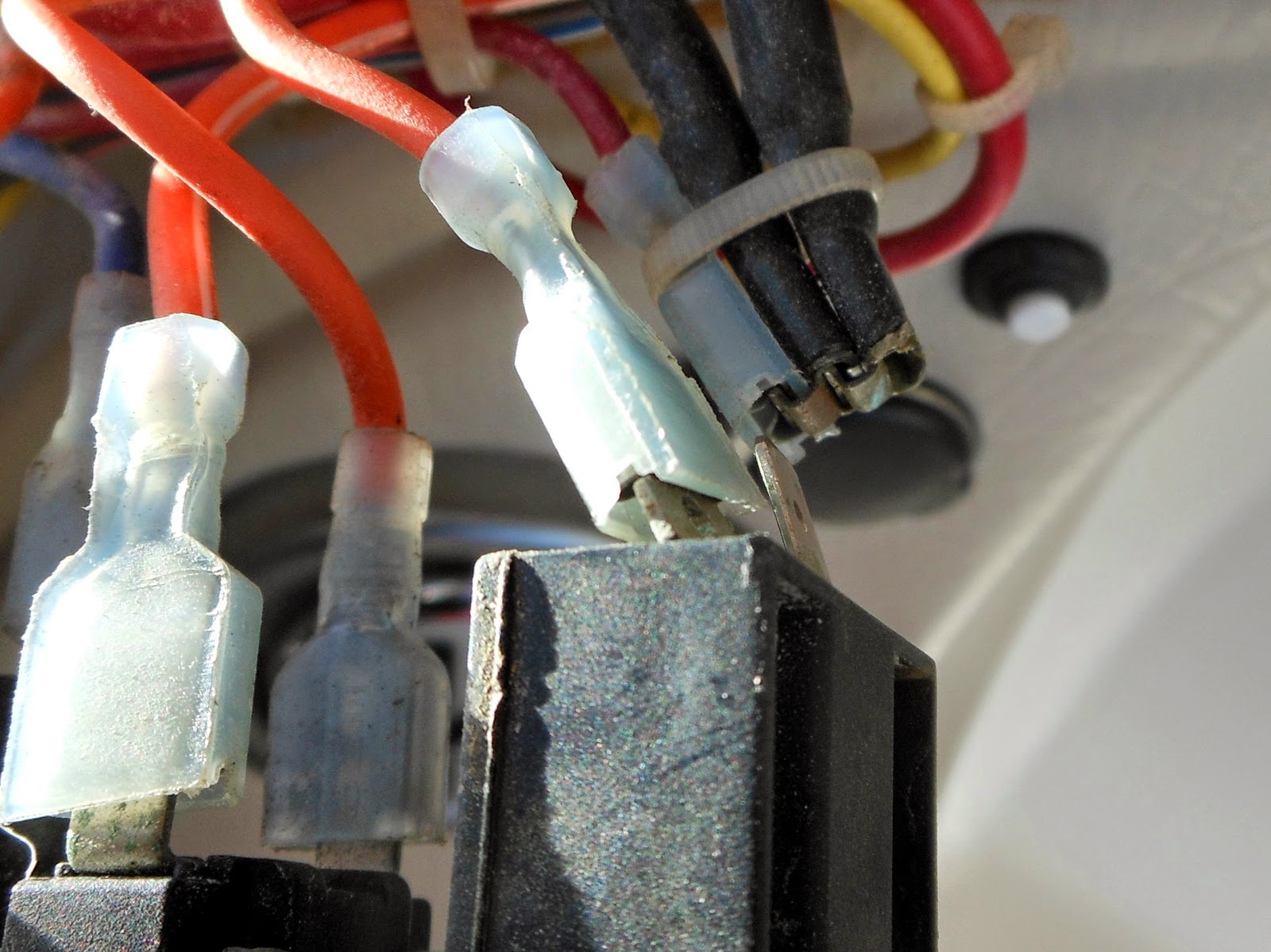 The problems are staring me in the face. The harness had been so tightly tie wrapped the connections on the breaker had been bent over nearly 45 degrees, and the output side had been barely making contact if at all. Several other switches had suffered from a similar fate. 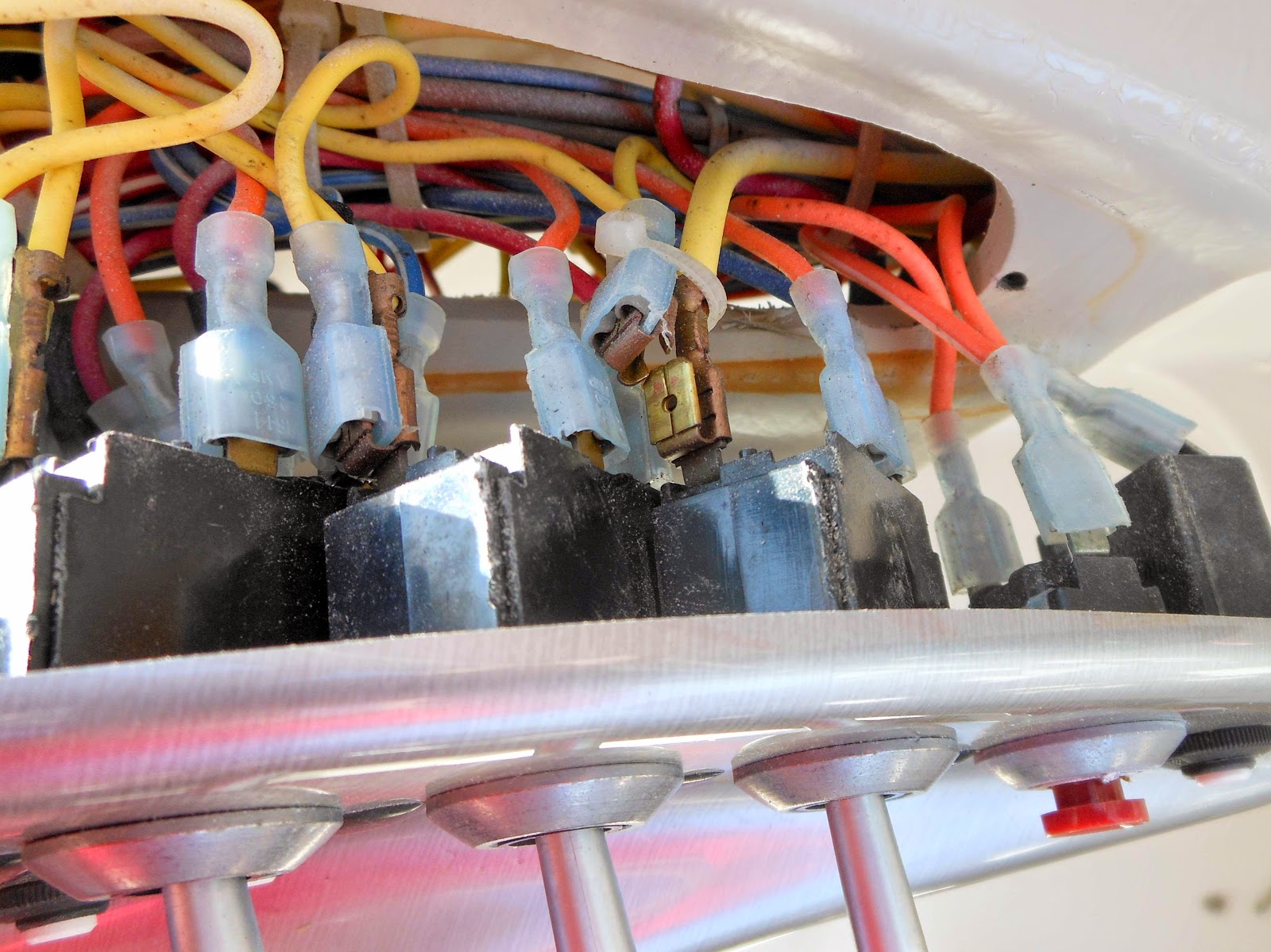 I no longer have power, so I jury rig the power to light up the panel. The horn no longer works, there is no power to the stereo, but the courtesy lights now work, after I plug them back into the switch.

Poking around a bit, the stereo isn't getting power because its power wire had pulled out also. The horn switch does have power but the horn is likely bad. These cheesy horns corrode into oblivion in a heartbeat if they aren't regularly used. Since it wasn't reported as not working, I assume lack of use is the culprit.

The switches are packed together so closely if there is a part number on them, I can't see it. These are also rough looking switches that look like they came from a tough part of town. They don't have tattoos, but I wouldn't have been surprised if they did. I'll call the builder and see if they have any part numbers for them. I don't hold out a lot of hope their records are that good or even that I will get a return call. So some is fixed and some is still pending. Judicious application of tie wraps allow the assembly panel to go back into place, without drawing and quartering it. The gauge is re-installed by braille. The horn will have to come later after I do some digging. It was just an average day on a production boat.

In reality this can be a potentially dangerous situation. With marginal electrical contact, resistance increases creating heat. Under some circumstance this can cause excessive heating of wiring, melting of wiring sheaths, causing more shorting, leading to a conflagration. In short this means a fire is possible. Although in this boat the occupants can quickly jump into the water and watch it burn to the waterline while treading water, methinks this is not a desirable scenario, and it's hard to call for help when your cell phone is soaked.