Once upon a time I spent about about nine months in Barnes Wisconsin. I'll just call it a sabbatical. My time was spent wondering what I wanted to be when I grew up. To date this question has never clearly been answered.

Barnes is the home of the Eau Claire lakes, and the head waters of the river of the same name. A pretty place to live, but also a very small town. There were about 600 residents give or take that lived there full time spread across 117 square miles. In the summer the little town would swell to many thousands as cabins around the lakes were thawed and opened for the season by multitudes from urban environs. Now for the Muskie Effect.

For inexplicable reasons the Muskie just appeared out of nowhere. It was a large Muskie, very large. If it had been caught by a regular lake fisherman it would have been stuffed and proudly displayed in his man cave. He would have extolled in a heartbeat his heroic exploits involved in landing the huge leviathan. For decades to come in hushed almost mythical tones the tale would be told. You haven't heard the saga of Herb, and the giant Muskie? Sit on down, crack a beer and I'll tell you the story.

This Muskie however first appeared nailed through its head on a telephone pole about 15 feet off the ground at the town boat ramp. Immediately its appearance became the talk of the town. How did it get there? Who was responsible? What will become of it? There were a number of drinking establishments in area all with varying shades of local color. The Muskie became the subject of the nightly adult beverage imbued conversation of the one I frequented.

Residents would make regular pilgrimages to check it out, and report on its condition. The conversations quickly changed to almost breathless sounding observations regarding its ongoing putrefaction. It's very bloated don't you know? Check out that fall like yellowish color it's turning. I have never seen so many flies on anything ever.

The day it ruptured was truly a memorable event. The now severely distended carcass, no doubt packed with methane, and other unmentionable biologicals had finally blown a seam. The thick liquid like contents were now slowly oozing down the pole sporting multicolored hues.

Time passed, and the Muskie moved into its desiccation phase. What was once like a fish shaped balloon, was now a wizened shadow of its former magnificence. Interest waned, and one day a pile of bones laid at base of the pole. Conversation had now changed to topics like wagers on when the car would fall through the ice in the coming spring. I moved on, but the Muskie Effect has always stayed with me.

I've now stopped by our incongruously located Morgan Out Islander three times now. I'm pleased to report that the Muskie Effect in Sarasota is now in full swing. 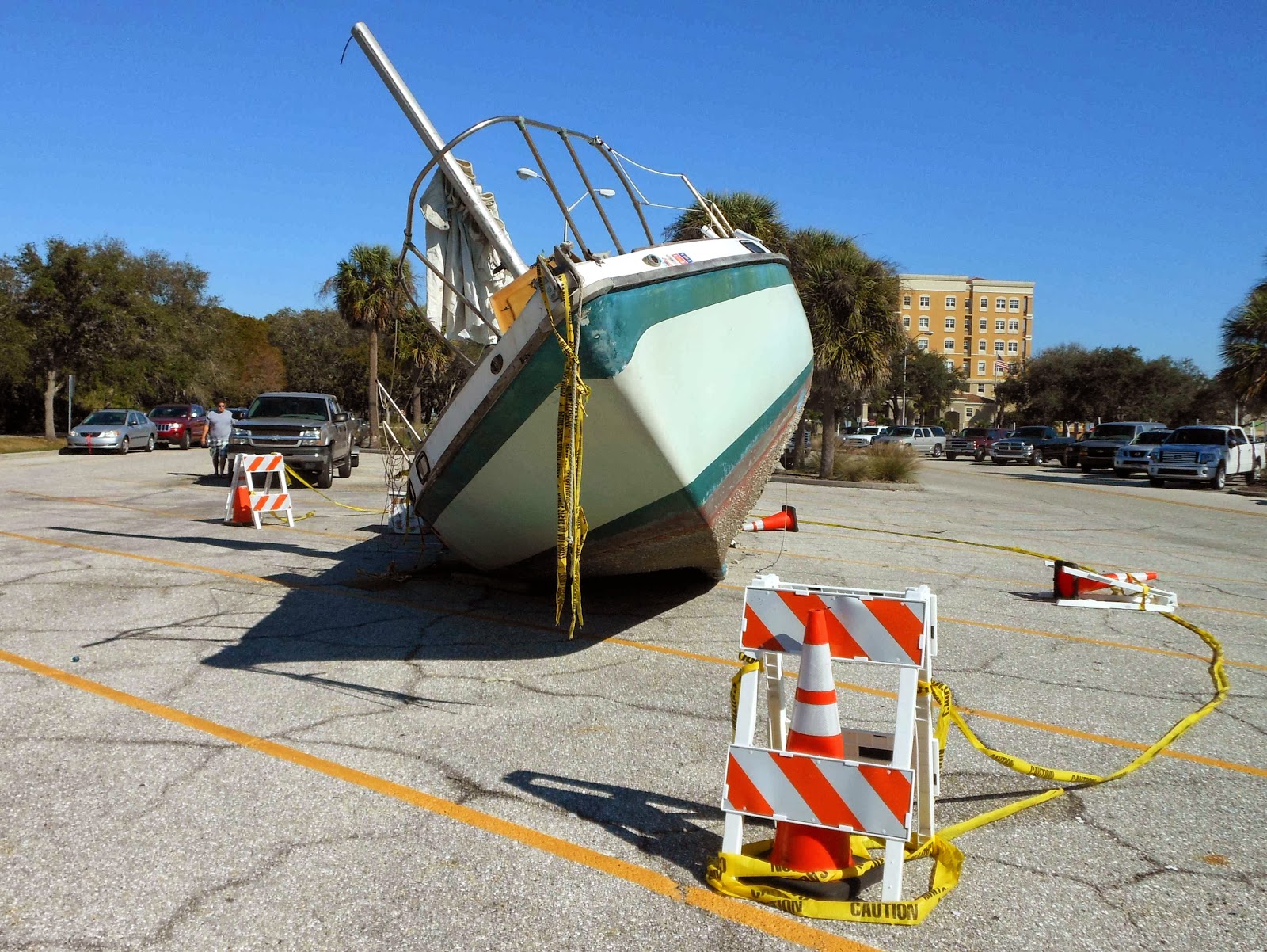 Its site is now in a bit of disarray. Knocked over barricades, and listless caution tape is lying on the pavement. The big piece of aluminum mast has no doubt been whisked away by unknown local denizens to a scrap yard yielding funds for many cases of beer. Parts have been disappearing. Winches are gone along with all of the loose wire cabling. 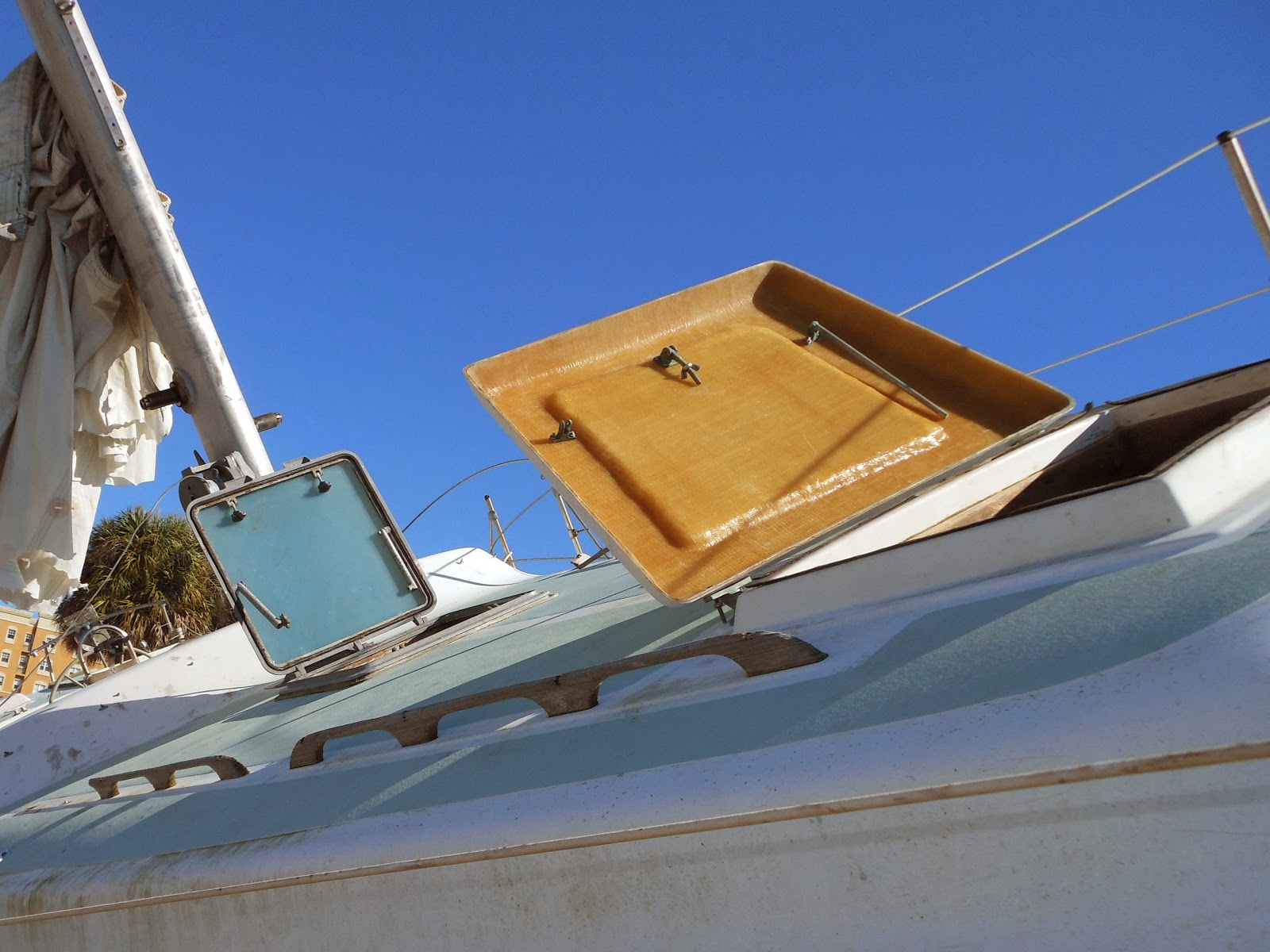 Good Samaritans have now opened all of the hatches, and removed some vents insuring lots of rain water can enter this hulking craft. This kind act is hastening the Muskie Effect's ongoing processes. 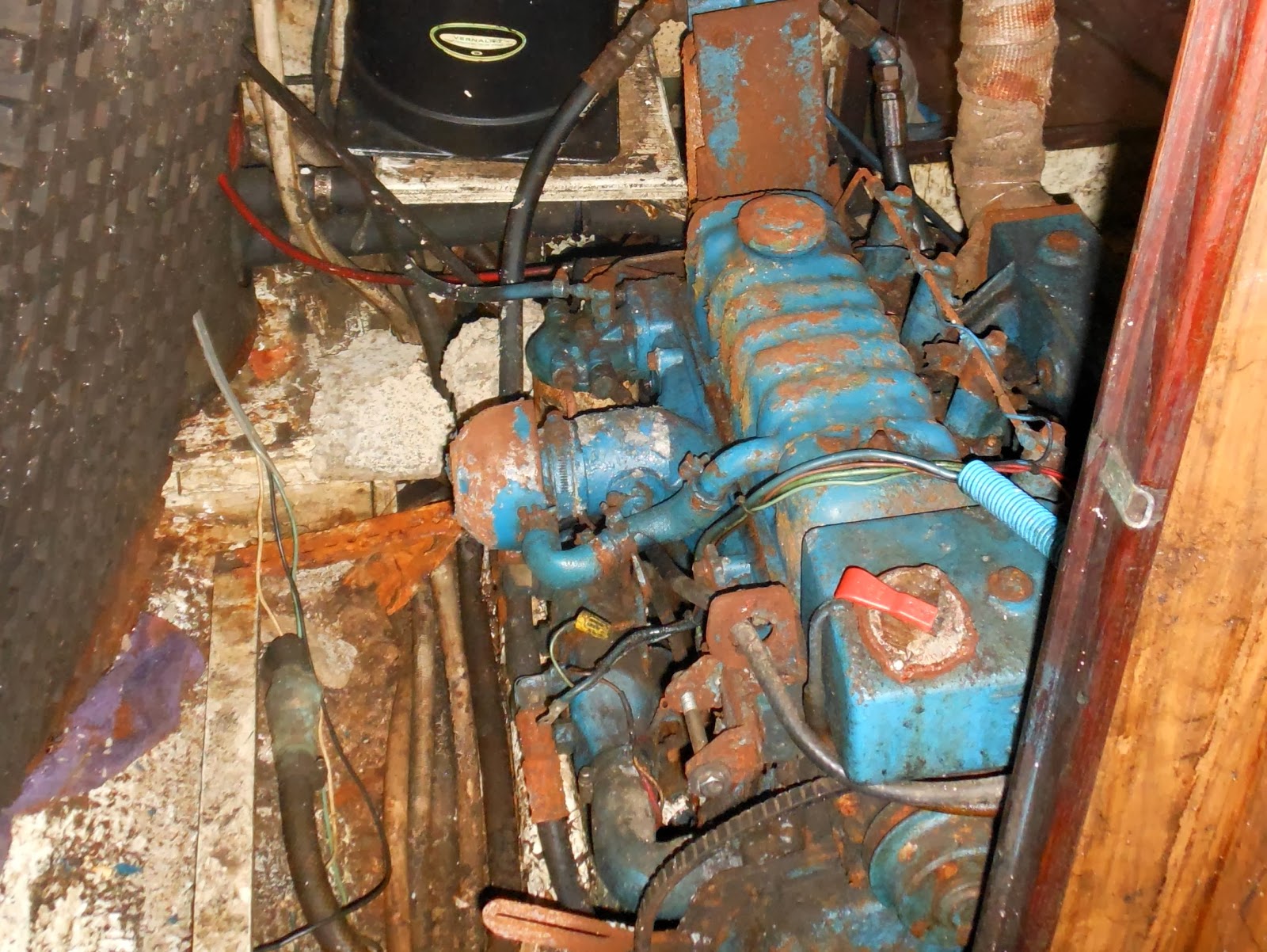 Only Muskie Effect can create this lovely patina in an engine room. The rust like umber hues are contrasting with the small amount of remaining blue engine paint. I'm pretty sure this image is from the desolation art period. 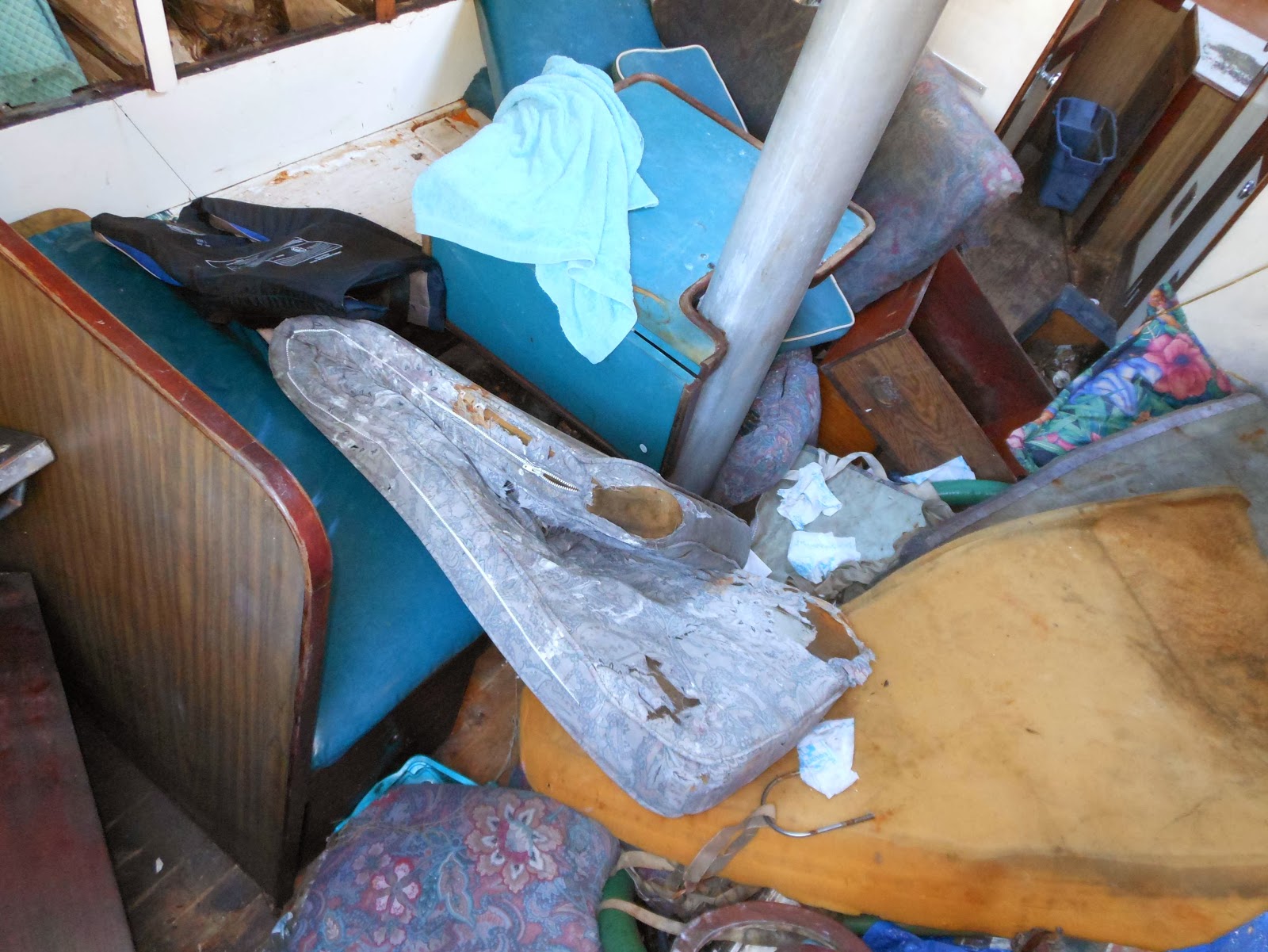 The tossed main salon however shows the best of the Muskie Effect at work. Sodden fabrics and foams. The increasing odor of rot. Growing molds, and the stench of bilge water from the other side of the tracks.

All and all I'm impressed with the rapid rate of deterioration. I think this should be considered as a piece of public art.

While you can still enter the boat wearing just a Tyvek  suit and gloves, a webcam system could be installed so we can all partake in watching the miracle that is the Muskie Effect from the comfort of our homes.

Cameras can still be installed later, but it may require a MOPP 4 level suit to enter the vessel. I've called the city's office of public information twice but haven't had a call back. I guess information about the vessel isn't public, or no one has noticed the large sailboat laying derelict in the parking lot. I'll check back in with you in bit with any notable changes, especially if anything starts to ooze out. Now that's the real eye candy.
Posted by Bill Bishop - Parmain at 8:06 AM