It wasn't that the fix was hard, but that the process was so maddening. The existing shower drain hole was just the wrong size for everything period. It's a shower drain circa the late seventies that had a home style fixture originally installed. It long ago disintegrated into crumbling green shards during its final decent into darkness. The associated pump had long since passed away, and the hoses were desiccated and in a state of rigor mortis. These were the easy things to replace. The drain fitting, not so much. 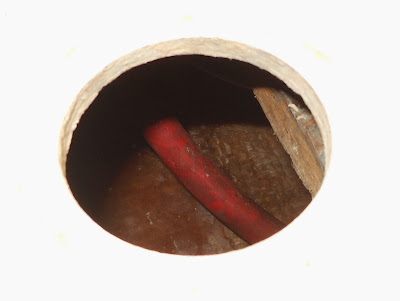 Just to make things more complicated there is a plywood sub floor underneath whose irregular cutout is a bit larger than the hole. Some sort of a plywood stringer is also off to one side just for irritations sake, and I can't quite get to the hole by hand from below either. A most insidious and awkward design. 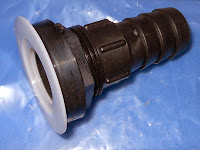 After what seemed to be endless searching I settled on a scupper. Unlike most through the hull fittings it was very low profile, and almost fit the hole. By this I mean it would fall right through the hole, as I promptly discovered. But it will have to do. It's all I can find that will work, with some creative imagineering. 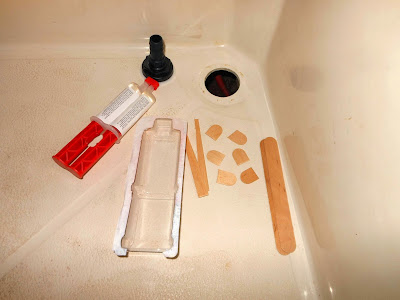 My solution is to make the hole smaller, but not too much smaller. When you screw off the backing nut for the scupper you end up with a lip that's a fat quarter of an inch wide. This is where I'm going to make the hole say Ahhhh.

Tongue depressors are always handy to have around. They make great fillets, stir sticks, and shims to name a few uses. They are the Swiss army knife of wood sticks. A box of 500 (a lifetime for me) costs less than $6.00.

In this case I'm using them to create a ledge for my fitting to sit on, along with some stir sticks, and a goo application device. 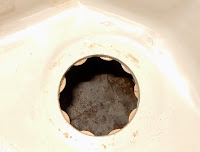 It's five minute epoxy that's being used. The plastic piece has been given an eighty grit dermal abrasion. I cut nine short pieces of tongue depressor, and glued them in on the undersides. It looks professional doesn't it? 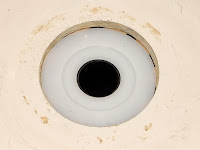 The finale is ready. A ninety degree elbow is attached to the fitting. The new hose is dragged in and clamped in place. Epoxy is mixed, and put on the tongue depressor lips. The hole assembly is dropped into the hole. The weight of the hose will not let the fitting sit flush on the edge, drat. Unintended circumstances have occured. A boat hook is hastily located and used to weight the fixture down until the epoxy sets. I wasn't into playing the Dutch boy, because five minute epoxy isn't always five minutes.

The epoxy' and tongue depressor's job isn't really the primary support for the drain. It just has to hold things in place for a while. The real interface will be the 3M 5200 fillet I'm going to ring the fitting with. That will hold it into the next century. 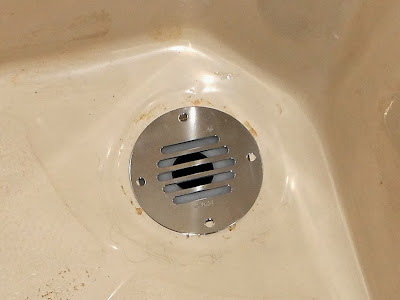 The job only took about an hour and a half to complete. But the hours spent trying to find something I could use was definitely a timey wimey thing. This paradox causes the endless passing time spent looking for obscure things to never appear on an invoice.

That's not surprising, it's a boat. A lot of time and money disappears into some sort of space time vortex.