I'm sure the marketing department felt they had a winner. I can just imagine the presentation. "In conclusion, Magnifico Yacht customers polled liked the idea, and it's becoming common in many luxury autos. We can also point out the safety aspects of not having to take your hands off the helm to change the stereo volume, or channel." "Good presentation Bob, and I like the idea. It's a lot better than that Grey Poupon mustard cockpit holder you pitched us on last week. We'll go with." 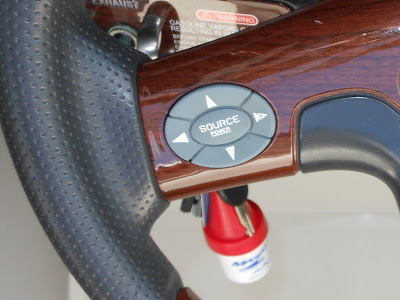 It was almost a well thought out idea. The little pads are reasonably waterproof, the helm was a special order run, and the stereo manufacturer created a special interface to their remote control to let it happen. What they didn't do was think ahead.

The year the boat was built the stereo manufacturer was getting ready to phase out the stereo this boat has, and introduce a new model. I'm sure everyone felt comfortable with the fact that the new stereo would be compatible with the old system, and would be in production for a long time. 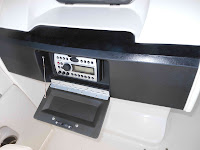 The progression from generation to generation was slow in modern terms. In the five years the boat has lived, the Clarion CMD4 was discontinued before the boat had its first birthday. The CMD5 was a plug and play replacement for the next couple years, and then it was sent to the manufacturing graveyard. The CMD6 was theoretically compatible with an adapter interface, and some gyrations, and has also been discontinued. Now nothing will work with these custom designed switches. Their current purpose is to remind all of us about the all too short life span of our toys. 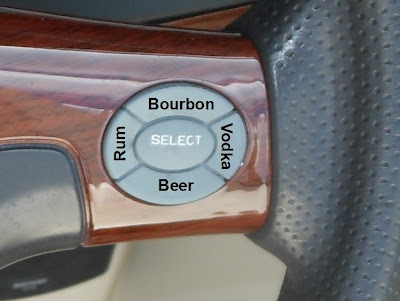 In reality this is all a bit of everyone's fault. The manufacturer who doesn't consider the long term supportability of what they put in their boats. Their marketing departments who are offering the high tech candy in the hopes someone will buy into it. The salesman who will point out how cool the tech candy is.  Then the buyer who willingly suspends disbelief and believes the manufacturer would never install something they couldn't support. It's an unholy alliance that I'm always on the back end of.

I know I harp on this subject, but I see it so often, and spend a lot of time trying to make these problems disappear, mostly on boats that are going to be sold. Pondering what to do with these switches an epiphany occurred. I could rig these switches to a relay board that would beep, and light an LED on a panel in the galley to tell Kate what drink I wanted her to deliver to me. I suspect it would result in hearing the screech of tortured plastic, followed by a splash.  I'll keep thinking about an alternative.

You know the worst thing about this was? The stereo's remote control was installed right next to the helm. D'oh.