I missed it, sort of. The older Capilano helm was leaking in the front. There was that steady insidious small line of hydraulic juice weeping its way down the console face, and being collected by a towel whose presence wasn't desired. Sure I can fix that, I say with my ounce of image. I call Teleflex, and get the part number for the helm shaft o-ring. Oops, I have to buy the entire rebuild kit for the pump. It is what it is and I have to have the gasket. The kit comes, the helm shaft o-ring was leaking, but not very much. I change it and wipe everything down. I'm done, but I wasn't. 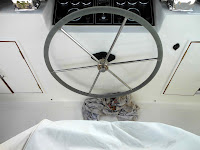 A few days later I get another call. It's still leaking. I go out and take another look. It's the twisty knob shaft that's now doing it, or more likely had been all along, I wipe everything down. I take some Q-tips and clean up the area, and yep, that is another leak. It was a good thing I bought the entire kit. Capilano helms have a knob that sticks out below the helm. Rotating the knob clockwise reduces the number of lock to lock turns, and increases the number of turns in the other direction. 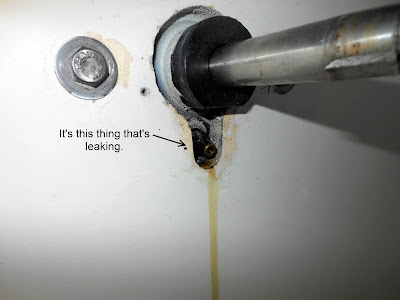 The helm shaft o-ring was a straight forward replacement, but I don't have a clue how to replace this gasket. I talk to Teleflex about the problem. The tech says, "You have to remove the front cover to replace the gasket. I'm staring at the cross section drawing that came with the gasket kit. The front cover isn't jumping out at me. "Is there a better drawing?" I asked. "Sure, I'll email it to you." 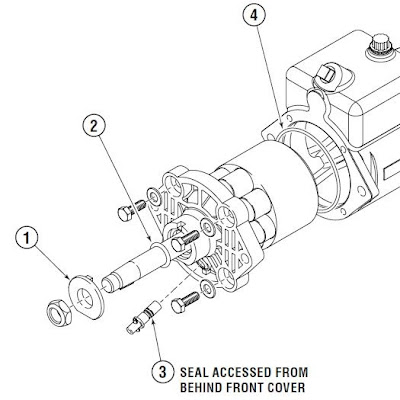 The drawing promptly appears, and I can now see a path to solve the problem. Better armed I call Teleflex back, and ask some more questions. I'm told to pull the four bolts, take the cover off, and you should be able to see how to replace the o-ring. Oh, and be careful when the cover comes off that the pistons don't pop out. Pistons popping out? This conversation also comes with the full realization the entire helm has to be removed. 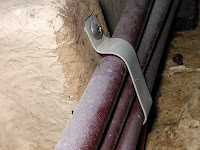 I have to say this operation caused me some minor degree of trepidation. I have never done this before, but blindly charged forward anyway. How hard could it be? I have a picture, some phone advice if needed, and I'm a patient guy. I will also take a profuse quantities of photos so I don't screw something up. Which way did that thing go again? If I do I can at least email pics to get some help.

Often on older boats that use copper hydraulic plumbing, just touching the tubing can cause it to disintegrate before your very eyes. Corrosion causes it to get brittle making it difficult to install flare fittings, and in general it is a P in the A to contend with. In this case, despite its age, it was coated with something that stopped any corrosion. I remove the tubing restraints to free them. The first fear is quashed. 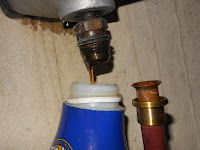 With a resigned sigh, I gather tools, rags, paper towels, and containers. I climb under the helm, and do the big ugly. The return line is freed, and containers catch about 85% of the fluid. Paper towels and rags are retaining the balance. The procedure is repeated for the other lines. The bolts that hold it to the console are set free, and it and I crawl out into the light of day. 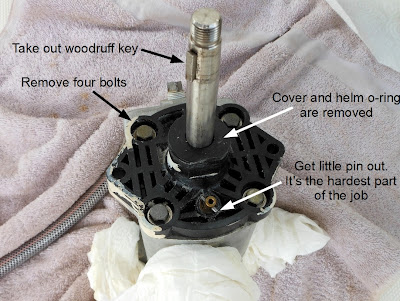 I'm soaked, in hydraulic fluid, and it's going to rain. I swaddle the unit in a clean towel, wrap paper towels around the ports to keeps alien things out, and quit for the day.

It's a new day, and I'm pumped so to speak. I lay out some clean towels. What I mean by this, in order to maintain marital bliss, is these are old work towels that have been washed. Tools are sorted and within easy reach. The only thing I'm short is a nurse to hand me tools, and to provide suction. That's of hydraulic fluid, stop thinking that!

I had fought woodruff key out earlier, and had cleaned it up. It came right out this time. The cover over the helm shaft came off, and the gasket I had recently installed was removed. Now for the dreaded four bolts. I carefully removed them one at a time, and nothing happened. I tried to lift off the cover with my hands, it won't budge.

I find a small screw driver, and gently tap it under an edge of the cover, and it moved a tiny bit. I repeat this moving in a circle until all of it had lifted about a 1/8". I took a larger screw driver and while prying up it popped up, literally, and startling me. 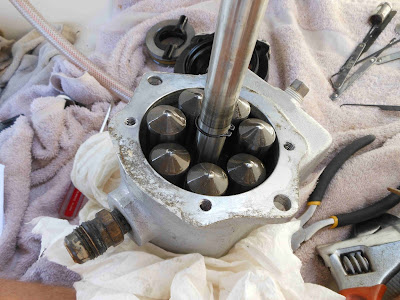 Behold the innards of the Capilano helm. Those things that look like missiles nestled in a silo are pistons. When the cover popped up several of the pistons were higher than the others, and wouldn't push back down. When I looked closer they were tipped at slight angles off center. When I straightened them up, they slid right back into place. They feel like they have springs underneath. I wasn't about to remove one based on my sense that lots of small parts would immediately attempt to escape, and at least one of them would succeed ruining my day. 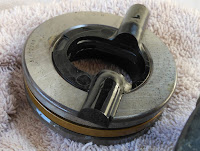 Directly under the cover is this assembly with a bottom circular plate that rotates on a set of bearings. This rides on the tops of the pistons. The half pins on the sides are top up, and allows the plate to pivot on them. 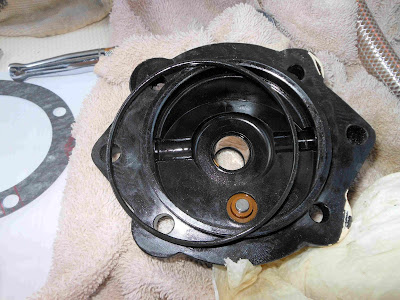 Looking at the underside of the front plate, you can see the orange end of the twisty knob. When you twist it in, it pushes down on the circular bearing plate making it lower on one side. It makes a kind of cam.

As the pistons rotate around the tipped plate, the steeper the angle of the plate, the further the pistons travel in each stroke pumping more. I think with the twisty knob fully retracted it will barely pump at all. I think it's a very clever design. 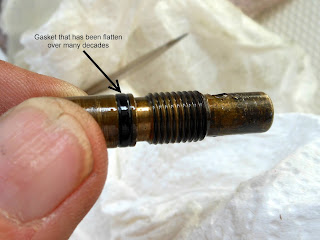 I feel a lot better about this whole job now. I have to pull a little pin out, of the twisty thing, and remove a washer. The twisty thingy just screws out. Some gyrations with my lock pick tools removes the old o-ring and the new one is installed.

Since I'm at it, and have the gasket, a new one is installed on the front cover. 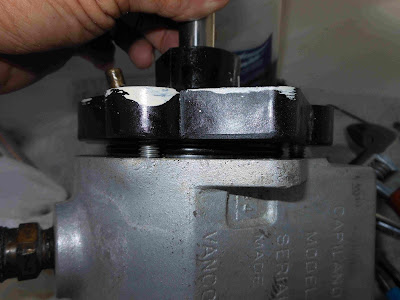 By slightly pushing down a wee bit, I get the first bolt started, An do the same on the opposite side. The other two bolts will now start to thread on. I'm concerned that the plate has to go straight down. so I lower it with the bolts until I can see the gasket is even with the face all the way around. Then one 360 bolt rotation at a time until it's seated. 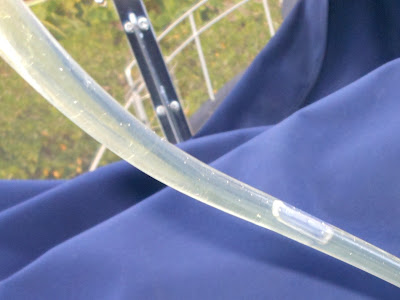 Hang the beast back in place, reattach the plumbing, feed and burp the baby, and no more leaks.

It only took four hours to do, and it would be much faster now that I really know how to do it. Sometimes leaving your comfort zone, and learning something new can be very satisfying. Thanks for the help Teleflex. Sorry about calling it a "Twisty Knob Thingy." I'm sure it has a real name. If it doesn't in the future I will call it the "CARASA." The cam angle rotational adjuster system assembly.