Timmy, we just sold the bow rider, and we will have to deliver the boat with a battery. Here is a bag of coppers. Take them to the market, and buy the cheapest battery you can find, and hurry back. And Timmy, if you come back with magic beans again you're going to be in big trouble.

The boat dealer is facing two conundrums. First off most smaller boats are not shipped with the batteries. Maybe there is some sort of interstate shipping regulations about this, or tipping the boat just a few degrees will let the batteries tumble out of the marginal restraints used to keep them in place. I think the boat builder just doesn't want to spend the money installing them. This has the added benefit of not testing the boats electrical system before shipping. Why look for trouble in the first place I say?

The dealer has to also worry about whether his staff has the competence and moxie to install the batteries in the first place. I mean look at all of the those wires, and ooh, look at all the pretty colors.

This is the end result. The solution from this dealers cost viewpoint is one cheap battery, with everything plugged into it. It's not hard. Take all the black wires and attach them to the negative post, and all of the reds go to the positive post. Hmm, what about the yellow wire Bob? It seems more reddish, then blackish, and what's up with these pink, and brown wires? It seems brown is closer to black than red. We better call the factory and ask. 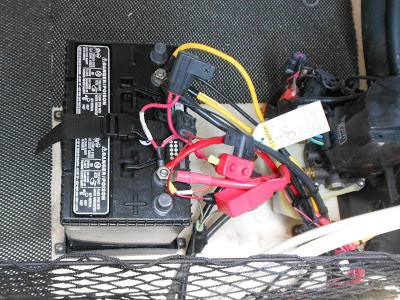 There is a battery switch. A very simple one. It's on or it's off. This dealership would have agonized over the complexity involved in wiring this, but the factory made life easy for them.

They took the 12v feed that goes to the starter, and put it on one side of the switch. The other side of the switch went to the tied up "Bunch O Red Wires" that would eventually go to the new dealer installed battery.

I love it when a problem is solved. The switch was installed in the boat, so you have to use it for something. The savvy boat owner will quickly figure out the switch doesn't do any thing, and they will call and complain about it. Now we can say, "that switch won't let the motor start. It's a safety thingy, you know some sort of boat building code whatchamacallit."


The boat builder apparently never contemplated the concept that a customer would actually want a second battery. We know this because the harness just barely made it to the battery. Or in other words this is where the battery had to go to be connected to the short wiring harness. 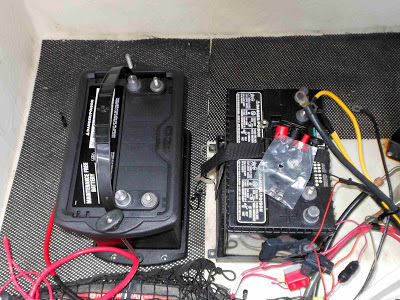 Adding a second battery is not rocket science but in this case it was a P in the A. The space was constraining to say the least, but the worst part was having to drag the wire stretcher down to the dock.

As the owner quickly figured out, much to his chagrin, that the battery switch functionally doesn't turn any thing off. This happened first when a light was left on, the second time it was a stereo. But I turned off the battery switch, why did the stereo stay on? 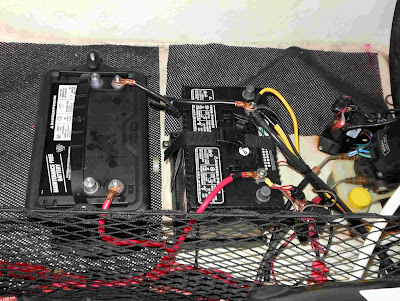 When I said everything was directly plugged into the battery I meant everything. Hydraulic trim pump, console ignition power, stereo amplifier and more.

In order to put a real battery switch in, all of these wires had to be spliced with about five feet of additional wire. This was the uncomfortable part, I had to climb into this space badly hunched over to do it. If the wiring harness been designed to and connected to a real battery switch this would have been a give and go. Still a P in the A, but just two cables, battery tray, battery, four screws, and maybe an hour. Instead it was over three hours of heat stroke inducing, muscle cramping spelunking. 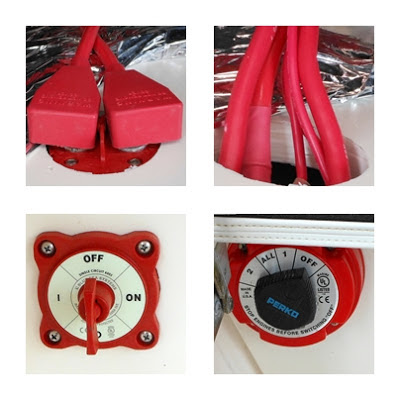 It's done, and the boat is better off. The new battery is much more powerful, and maintenance free. Off means really off now, and a discussion is had with the owner about using two batteries. When you stop, switch to battery number two to play tunes, and make daiquiris. To start, switch to battery one. After starting switch to "All" to charge both batteries.

Everybody with this type of battery system gets a short lecture from me consisting of....

"NEVER TURN THE BATTERY SWITCH TO OFF WHILE THE ENGINE IS RUNNING! NEVER EVER!"

What happens in many cases is the motor's alternator can't see the battery voltage, and assumes it is extremely low, like in zero. It then cranks into wide open mode, dumping in some cases 50 to 70 amps, and up to 17/18 volts into the harness. This typically, and instantly destroys the engine instruments, and often a lot of other gear at the same time. I get one or two of these often ARI (alcohol related incident) induced events a year, and they can be quite expensive. If anyone is confused about how to wire a typical battery switch, leave an note, and I will add a diagram.
Posted by Bill Bishop - Parmain at 11:36 AM