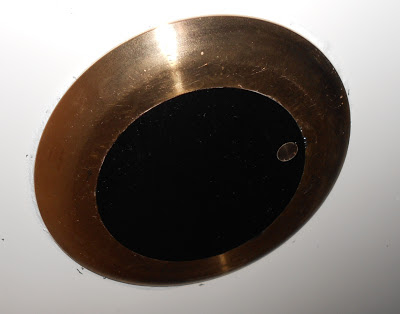 Today's project started out with what appeared to be a bad split transducer that was feeding a single Garmin GPS 188C that was being used at two stations.

When I arrived on the scene, the 188C knows where it is, but displays a "Sonar Disconnected" message. Now it's time for "Tales from the thermistor."

This a fancy word for a thermometer. As the water temperature changes, the resistance in the circuit changes, and correlates to a temperature. You'll find these devices everywhere. In your oven, engine water temperature senders, hot water heaters, and inside transducers to name a few.

But as reliable as this device is, for reasons that aren't clear to me, it's not quite as reliable as the transducer's piezoceramic element that does the sonar pinging, and listens to the returning echo.

Back in days of yore, sounder module builders had from zero, to varying simple schemes to tell if, and maybe what kind of transducer was plugged into the module. In 2007 Airmar started to include an orange XID (transducer ID) wire. This allowed the transducer to tell the sounder who, and what it is. 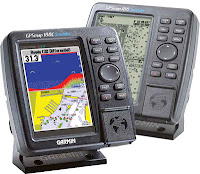 Since our Garmin 188c predates this technology, what Garmin did to check if a transducer was plugged in was to check for a temperature reading from the thermistor. Got temp? Turn on sounder. No temp? Don't turn it on.

Oh yeah, back to the sonar disconnected message. This is where I'm ready to regale and awe the customer with my extensive skill set, thus validating the miserly wages I will ask to be paid.

Out comes a utility knife and I carefully slit the plastic cover away from the transducer cable. This transducer was made by Garmin. Note the green and red wires, they are not Airmar colors. With a flourish I cut and connect the green and white wires on the connector side together. It gets plugged in and the sonar disconnect message has gone away. Hah, see what my knowledge has wrought! Oops, the box now believes the transducer is there, but the old transducer isn't pinging. A new transducer was installed when the vessel was recently hauled, and I plug it in. It works fine. Okay this works about 99% of the time, but not this time.

If you see different colors, ie brown and blue when you slit the cable, this means the transducer was made by Airmar, and you will do the same thing only the colors will be brown and white. Remember this is on the connector side.

Part two of the problem is the old transducer had been split, and the cable was feeding two locations. This connection couldn't be accessed. This was a house boat, and a lot of wiring can only be accessed from underneath when the vessel is on land. Don't ask, it's a house boat thing. My best guess is the connection point became corroded, and Mr. Electricity encountered a road block.

More problems still exist. The new owner had purchased a new Garmin 441s and wanted it installed at the upper helm. That was a good decision because the 188c's connector had a severe case of green jaundice, and wouldn't be usable. But we also had to identify the transducer cable coming down to the lower helm. Normally you would pull it on one end, and someone at the bottom would yell, "I got it." Not so easy here, we have a bad case of convoluted pull syndrome.

The pull is buried in fiberglass insulation in the boats attic. Outlets had to be pulled from the wall, and wads of fiberglass insulation up top were jerked out to do this. I used over sized hemostats to extract what I thought was the wire, at the sort of half way point, and someone else bellowed, "that's the one," when I pulled on it hard. This is repeated at the lower helm to find the buried wire.

We're on the downhill slide now. The transducer wire is cut, and spliced wire for wire to the two connector end pigtail cables. The new cable for the 441s is connected, and we have joy at both helms. Sharing a transducer between two stations is possible. But like all things in life, there are rules here that go beyond being reminded to flush. So I'm going to provide some generic bullet points about our discussion. 1. Never plug a transducer into a device that is powered up. Bad things can happen that will effect your wallet.

2. Devices that are sharing a transducer, can't be on at the same time. Turn one on, only if the other one is off.

3. Do a good a good job with the splice, and if it lives in a bad place heat shrink the connections. For small wires the photo shows a good way to do the splice.

4. Don't call tech support for help with this discussion. They will all say "don't cut cables, your warranty will be in jeopardy, and we are holding your first born hostage to stop you." Just kidding they will be nice, but they will not think it is a good idea, and I don't want to be yelled at by them.