The pass was Egmont Key, and the vessel hooked to the south seeking the lee side of Anna Maria Island. The boat was bailed down as much as practical, and the family fled to shore. The storm followed them into the coast, roiled over night, broke the anchor chain and  drove the ketch onto a sandbar.

In the morning a tug attempts to pull the boat off the bar, but to no avail, A plan is hatched to remove one of the running backstays and use the tug to heel over the full keeled vessel. It starts to shift, and then with a horrific crack, the main mast splintered, and crashed into the water. In 1957 dollars $9000 dollars of rigging was now floating in the water. 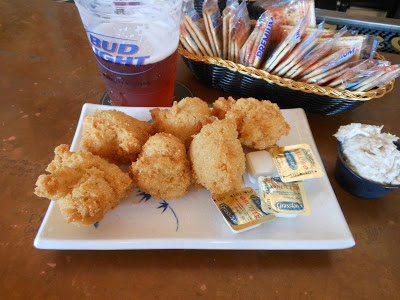 Pictured above are real hushpuppies. Their distinctive shape comes from batter being rolled off of a large spoon into the oil giving them an irregular shape. I know to most the're not recognizable, and many are going to say, "This guy is some sort of an elitist, where I live hushpuppies are roundish, and I like them. The're gooey inside and seem to have some wet like onion sort of bits in them." 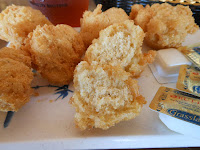 Now lets take a look under the hood at a real hushpuppy. When you break it open, it's actually fully cooked inside, and fluffy like the inside of a piece of corn bread. It's also speckled with small bits of chef added mojo. 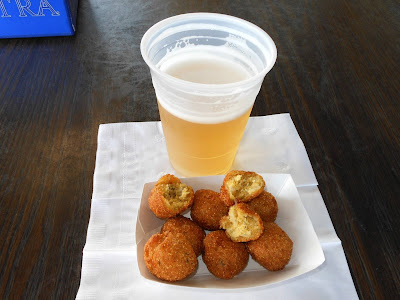 Behold the machine extruded hushpuppies. They're about the same everywhere. In reality the ingredients are nearly identical to real hushpuppies, but they have to be smaller to actually cook the oft frozen interior. Since the mojo added to the batter has been frozen, things like onion tend to be mushy. Try freezing an onion, thawing it, slice it, and put it on a salad. It's not good eats. 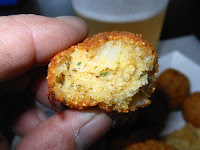 When you break open the machine extruded cooked product, you can see the interior is a bit mushy inside, and I'm being kind. If you blow up the picture you can see the less than tasty ring of grease just under the crusty layer. 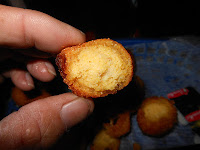 Without regard to my personal health, and as a public service for all I have randomly visited about seven or eight of our local seafood establishments. I ordered hushpuppies, and a beer for lunch. The Beer? Yep Yuengling, you can't properly divine the exquisite taste and textures of this fried food by washing it down with a glass of skim milk.

Only one in the lot actually made their own hushpuppies, and unfortunately all the rest served me various versions of the frozen oil bathed balls. This is amazing, the recipe is stupid simple, and I don't mind if you use a dry mix to make the batter, as long as you add good mojo. So when you go to a seafood restaurant and want to order hushpuppies, ask to see some first. If they look like jawbreakers, large marbles, wonky ball bearings, cojones, or tiny billiard balls, do yourself a favor, and just say, "Sorry, what a shame, I wanted real hushpuppies, not your deep fried  extruded balls, even if you say they are tasty."

For the record, not a single sole said a word to me as I sat there taking pictures, and eviscerating their food. Walt's Seafood restaurant in Sarasota is the only is the only one I have found to date that makes real hushpuppies. I'm not mentioning the ones who serve the ersatz ones. There must be some more, and when I find them I will add them to this now very short list. You're not a real seafood restaurant, if you don't serve real hushpuppies.