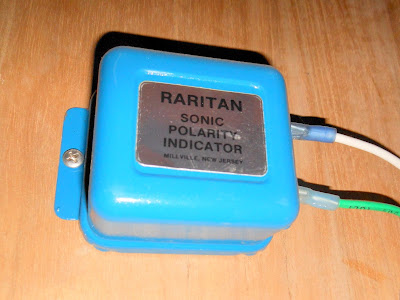 I get to the boat, turn on the pedestal breaker. Whoa, what's going on here? You could have heard the buzzing from fifty yards away. My first thought was maybe isolation transformer core laminations were vibrating, but this was way to loud.

I go aboard, and start to look for the source. Half an hour later after pulling out a pile of filled drawers from a cabinet, and crawling way in I found the source. A small box about two inches square.

It's a reverse polarity sensor, and for such a small box, boy does it make a colossal racket. There is no doubting it's operating. It's late in the day. It's not my boat. A friend of mine takes care of it, so a call is made, and I agree to meet him at the crack of dark in the morning to see "what's up with that." The boat is relieved of Mr. Electricity for the night, and I go to do weighty pondering of the issue at my watering hole over a medicinal bourbon.
. 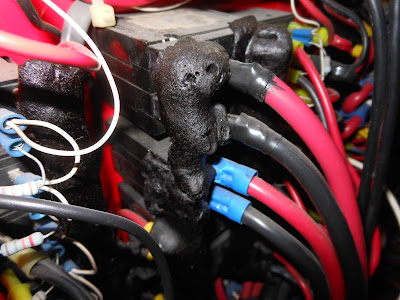 It seems the boat has had some power issues. Power strips abound in the boat, and several have blown up with a notable "Kapow". Light dimmers have acted up on occasion. Several GFI's are popped, and at times the AC system doesn't seem to have enough power. All of this has been intermittent, and the owners short term solution is to use the ship's generator, then everything is perfect.

So we have some clues. The problem only exists while on shore power, but not on genset power. There is a reverse polarity issue according to the little blue screamer which only does its wail of anguish on shore power. In the harsh light of morning we convene on the bateau with caffeine, and instruments in hand. The main panel will only open about half way. All of the breaker connections are covered with black foam tape that has petrified over time making access for any measurement difficult. 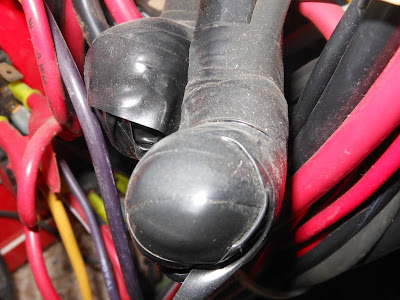 And just look at the set of low hanging balls on this beast. Instead of using terminal blocks, large wire nuts where used, and they were neatly covered with prodigious quantities of black tape, also now petrified. There is no ground block, just another huge ball of green tape over a wire nut, in a nearly inaccessible location. 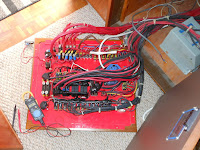 Because of the miserable access, the hinge is pulled, and the panel laid down on the floor. That's better, now what to do? Our little polarity wailer senses current on the neutral, as it shorts to the ground, but why doesn't it scream while using the genset.

We don't have wiring diagrams, always a sore subject in my mind, but it's likely the ground isn't connected through the generator. The polarity sensor needs the green ground to squeal via the shore power connection. It's so difficult to get access to the green ground, we will work around the problem for the time being. The only common intersection between the shore power, and the genset power is a large blue rotary switch. It's ohmed out, and is fine. It's ohmed again while my colleague twists the switch handle and tugs on the connecting wires. Again all is fine. I check the pedestal, and it's okay also.

We check the GFI's and they test reverse polarity while switched to shore. The wonky light dimmer is still wonky while on shore power. I tipped the panel back up, and all of a sudden everything is fine. Lay it down, and everything is still fine. Tug on wires, still good. Tip up, tip down, tug, shake, and twist. I clamp my amp meter on the shore power cable, and it now tells me there is no leakage to either neutral or ground.

Aha, maybe we did find the problem after all. I failed to mention a small detail. Just before everything started to work, and I tipped the panel back up, I had noticed the 50A shore power cable had an extension cable plugged into it, and the connection was hanging downward off a dock piling. I disconnected it and there was water in it, a lot of water. It was skinned, and thoroughly shaken out, left to dry for a bit, and then reconnected. We had several days of rain, and that's when the problems seemed to start. The cable is now laying flat on the dock which should help somewhat in rains yet to come, but a better solution is needed to prevent it from doing a liquid related shorting again.  No doubt in my mind, Mr Aqueous's fingerprints were all over this.