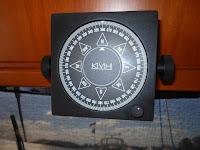 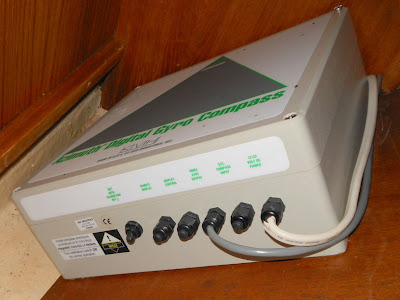 Boat so big Ruk, me got new intercom thing. Just push button to tell woman to bring me fermented goat milk. GROB, WERE YOU TALKING ABOUT ME? No, dear, just tell Ruk about talk machine, and how nice it be to hear from woman. 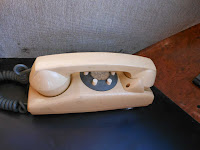 What move boat Grob? Boat powered by two big Mammoth. Crew always complain about number bales of fuel they use, but mostly complain about exhaust. Grob tell them to throw exhaust over side.

This is a vintage 1980 Cheoy Lee trawler. Beautiful interior, but the systems were very dated, and to complicate things the boat had sat for five years with little attention. The new owner bought it right, but it took about two weeks of work to get it away from dock and moving toward its new home on the other coast.

In the beginning toilets wouldn't flush, the holding tank vent was plugged up and couldn't be pumped out, showers didn't drain, numerous copper pipe water leaks, engines needed new exhausts and injector pumps, antique electronics, and so on. Couple this with next to no documentation on the vessel, and you had to be creative. 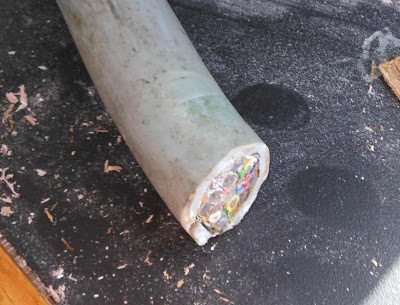 In many ways working on an older boat, is just like a new one, but often easier, and definitely more fun. They provide a crystalline view of how far technology has taken us. If you go back in time, say ten years earlier in build date, this vessel would likely have had few electronics on board at all. Perhaps A RDF, an early marine radar, depth finder, and of course the ubiquitous compass and paper charts.

In the process of dealing with older boats, you become a forensic archaeologist who uncovers the many layers of previously installed marine electronics. Clues abound like massive old radar cabling that took a longshoreman crew to install, large holes in the console that have been covered with new Formica to hide them, and early black boxes still residing on the bulkheads held by rusty screws. The newest piece of gear on this vessel was a very old Windows navigation PC with no display and a myriad of inscrutable interface wiring. 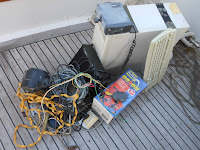 My primary role was to get some basic new electronics on board, and see if the autopilot could be made to work. For the record, few things drive me more nuts than having old non functioning gear on a boat.

Wiring that plugs up chases, and junk that swallows valuable real estate must leave boat. So without spending a lot of the owners money, at every convenient opportunity, my nippers will cut, and the screw gun will remove unneeded stuff. At the end of the cycle a lot of dusty gear was made to go away. Outdated equipment, fifteen year old flare kits still in unopened boxes, an antique EPIRB with un-replaceable dead on arrival batteries, and much more.

The first task, and potentially the most touchy was seeing if the auto pilot would come back to life. It's an older ComNav that is sporting a "Compass Error" message. The culprit was the large KVH compass that weighed about 15 lbs. There wasn't a scrat in it, but there was a failing, noisy, and real motorized gyro inside, something I haven't seen in decades. 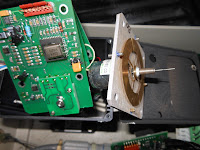 I couldn't stand it. I had to open it up just to see it. I don't know how many millions of revolutions it spun, but it would be many.

Despite all of the things that could have possibly gone wrong like incompatible NMEA software levels, everything went well. ComNav staff actually returned an email over the Thanksgiving holiday weekend answering my questions, and sent a follow up email on Monday. A new, much smaller, and noiseless KVH compass took its place, and the pilot is now operational.

The upper helm was devoid of electronics. There was wiring for an old Datamarine depth finder, but no unit, and a broken bracket for a dilapidated VHF radio.

The plan is to put a Garmin 4210, and a Standard Horizon VHF on the bridge. Then install a second station kit, inhull transducer, and a Garmin GSD 22 below. Since the budget isn't unlimited, I cut a couple of corners to save some money. The lower second station will be rarely used. To move the Garmin to the lower station two steps are required. 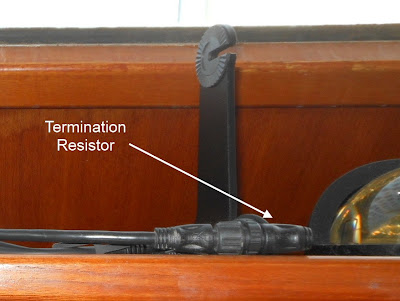 Pssst, don't tell anyone, but the system runs fine without the second termination resistor. But showing an abundance of caution it should be used. I haven't tested it with all of the ship systems up and running. Now take the unit to the lower station and hook up the cables.....

Then the next step is to swap the network cables from upper to lower helm on the sounder module. They're labeled, and it just takes a second. The sounder is just inside a cabinet door so no spelunking is required to access it. This saved the cost of a network switch and its installation.

A couple of hours crawling around finds a suitable location for the Airmar P79 transducer, and it's glued down on a hull that is approaching an inch thick. Holding my breath, the system is fired up and depth, and bottom profiling occurs.

This was a fun project, and it was satisfying to see the boat come back to life. This was a lot of boat for not much money when contrasted to buying new. She is an elegant vessel with new canvas, varnish, white hull, working systems, new bilge pumps, and now seaworthy.

As a final note our Neanderthal friends Grob and Ruk couldn't pass Darwin's evolution test, and became extinct. Cro-Magons did pass that test, and survived.