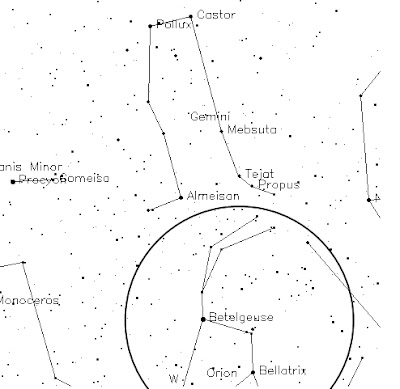 Kate does some research, and selects Oddity Tattoo. I agree to meet her there, and get there first. If you hadn't guessed, I'm not a tattoo expert. I know Popeye has one, and about as close as I have been to the business is watching an episode of Miami, or LA ink on the idiot box. So I'm expecting a place full of drama, Kat fights, and a collection of societal miscreants holding buzzing needles used to ink up their peers with flaming skulls.

So when I entered I was surprised, but in a good way. The place is as much an art gallery as it is a tattoo parlor. Spotlessly clean, quiet, in a buzzing sort of way, and  Melanie  the pleasant receptionist greets you with a metaphorical "Bonjour". I sit down and wait for Kate. Everybody seem normal, albeit some have more than their fair share of tats. 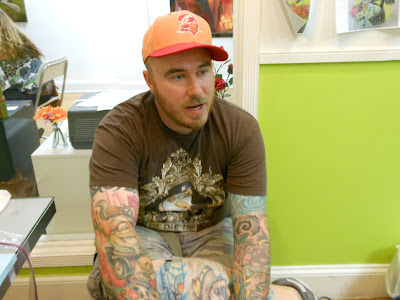 Kate arrives, and we meet Scott Olive. Scott is a very talented earnest young artist. There are preliminaries to be taken care of. You have to sign a waiver, and aver you're not buzzed or drunk, along with some other legal mumbo jumbo that says it's not their fault. You can't be pregnant, on blood thinners, or suffer from other maladies that wouldn't like the process. I know for a fact that adult beverages, mixed with enthusiastically purchased tattoos can create buyers remorse in the harsh Tylenol driven light of the next day. This is then followed with an expensive trip to the dermatologist to meet Dr. Laser. 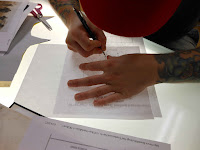 Scott and Kate chat. Kate wants a tattoo of the visible portion of Orion, and wants it to look like a constellation on a star chart. There are two primary stars, Betelgeuse, and Bellatrix that should stand out. A discussion ensues about colors, and what Scott thinks would work well, and what won't. Kate gives Scott her sketches, and he goes over to a desk to make a transfer. 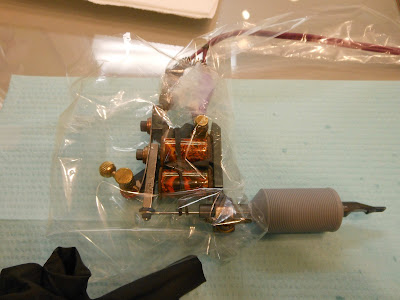 This is the instrument of dermal penetration.  It's actually a high tech version of the electrical bell ringer which dates back to the early 1800's. This is a two coil unit. You can still buy single coil machines, but twin coils with a processor allows better control. The grey cylinder assembly is the handhold and needle guide, and came out of a one time use sterile package. The needle is also a sterile used once item. While we're on the subject of sterility, everything in this place is being continually cleaned all the time. Reusable equipment including its wiring is shrouded with disposal plastics.

This machine has a programmable controller that manages both speed and depth of the needle. A wireless, or hard wired foot pedal is used to keep the artist's hands free to do their craft. 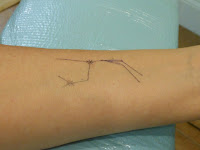 Now for the nitty gritty. Scott does a transfer on the skin that will act as his guide. This also allows control over the position. Scott gets it right the first time, and then the...........      buzzzzzzzzzzzzzzzzzzzz 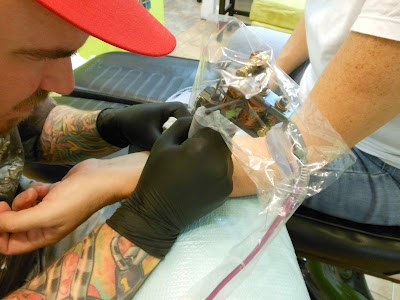 This is a deceptively simple appearing tattoo, but it isn't. As Scott said, a few years ago, he couldn't have done it. It's very difficult to draw a straight line on flexible moving skin. He is using his smallest diameter needle to keep the line detail sharp. He also has to draw the fine line star bursts for the two more notable stars, and small blue dots that indicate the other stars. 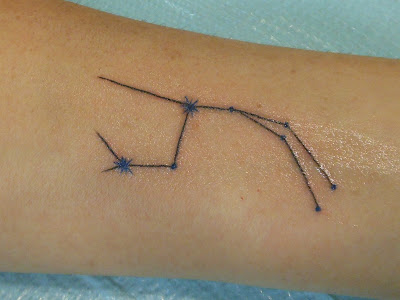 In about 15 minutes it's done, and well at that. A long lecture about taking care of the new ink while it heals, is followed by some creams, and a clear saran wrap cover. Saran wrap you say? Scott says everybody will want to look at it, and this way you can show it off without taking off the bandage. It healed perfectly. Kate is going back to Scott to add some embellishments. We talked about having the Milky Way running up her arm, and across her back, but no. She is going to add some astronomical chart symbols for some other objects in the immediate area such as NGC2264, (Cone nebula) NGC2244 (Rosetta nebula), and a couple of other interesting objects.

It was an enlightening and interesting experience to follow Kate's adventure, and homage to her mother. She put a lot of effort into making this tattoo meaningful to her, and attractive. Oddity Tattoo is a professional operation with skilled artists, and no drama. Just a lot of consultation, and well executed effort.

But now I'm feeling  old, irrelevant and not hip, and I have to do something to show I'm "Cool" too. So I think I'm going to have one of those sound modules you see used in greeting cards implanted just under the skin in my arm. Since Scott is good with cartoons, I will have him do a tattoo of Dr. Zoidberg over the top of the module. When you press on his eating orifice he will say, "The frenzy is over? How will I get rid of my male jelly now?" Yeah baby, whose hip and high tech now? It's high five time with with sparkles. Oops did I just blow it? Golly gosh darn it. 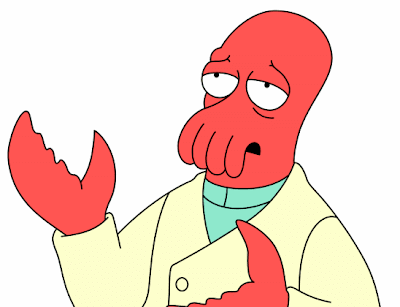 Dr. Zoidberg is the Planet Express staff doctor on Futurama created by Matt Groening of Simpsons fame. He is sort of a caricature, and spoof on Bones (Dr. McCoy) from Star Trek. Bones had to deal with sick aliens on occasion. Dr Zoidberg on the other hands believes he is an expert in human anatomy, but in fact he is clueless, and will eat anything. Dr Zoidberg was voiced by Billy West who uses a stereotypical Yiddish George Jessel styled voice for the character. You have heard Billy West's voice at one time or another. He is the contemporary voice of  Bugs Bunny, Elmer Fudd, Popeye, and endless others. The fair use doctrine on Zoidberg's image is now satisfied. He is my favorite cartoon character along with Bender, Ren, Stimpy, Al Gores head, the Angry Beavers, and don't forget Squidbillies. There are more, my list is large. I just have to watch them when Kate isn't around. She just doesn't understand the deep intellectual and metaphorical aspects of potty humor.


The horizon star view page can be found here.
You can check out Scott Olive's art work at the Oddity Tattoo site.
No flaming skeletons on motorcycles were hurt during the writing this piece. Thanks for the experience Scott.
Posted by Bill Bishop - Parmain at 3:49 PM