Debby was a downer indeed. The rain started five days ago on a Thursday, and with a vengeance. For four days it never let up, and well over a foot of precipitation fell. Noah was frantically trying to finish his ark, but like all boat projects he was way behind schedule, the site was flooded, and the alligators were hungry and cranky. The radar display was solid dark green with lots of yellows and reds. The alerts were spewing out nonstop on the TV and radio. Brappp, Brappp, Brappp, this is a.... tropical storm, flood, rip tide, thunder storm, tornado, high surf, marine, and four horsemen of the Apocalypse warning. But like all large rains with a name we occasionally get here, life goes on. Banks are open, there is soggy mail in the box, and restaurants are packed with grumpy tourists 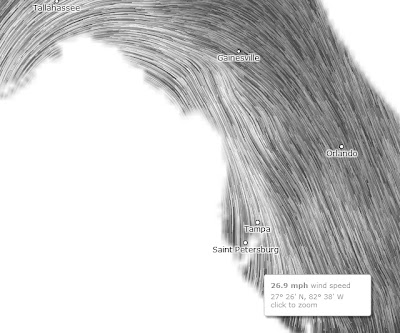 Debby's motion in any direction was sloth like, and very difficult for any of the large computer models to predict. But along with the monsoon, its the constant wind that has been a problem. It was blowing at about 30 mph sustained with gusts to 50+ mph for days. This has roiled the gulf with to 10-12 foot waves, and put 3 footers in the bay. A lot of the damage to local boats has just been caused by the accumulation of days, and days of bouncing around. 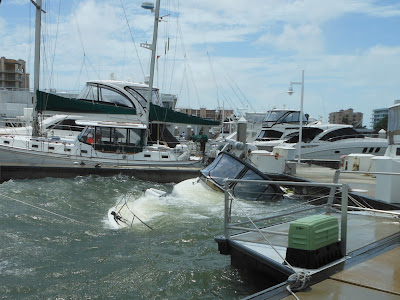 The 341 Meridian you can now only barely see now was a causality of the continuous pummeling. The bow cleat pulled out of the floating dock allowing the boat to twist in the dock turning it so the 3 footers were slamming it into the jutting portion of the floating dock. I can't tell if it was holed, or rolled, but it's a total loss. Floating docks can produce some interesting dynamics that I will chat about a bit later. 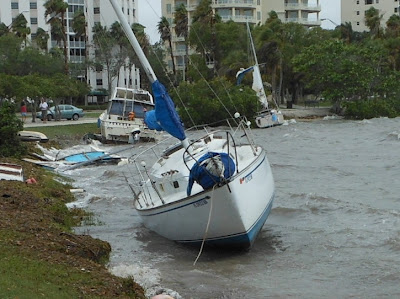 Good beefy winds provided many boaters with the opportunity to take the State of Florida mandated "Anchoring Test", and you can see some of the failures here. They will have to take the boating summer school class to get into the next grade, if their insurance company will still let them. The power boat in the back ground has a history of ending up on the shore. I think they are using clothes line as anchor rode, if there is a real anchor at all. 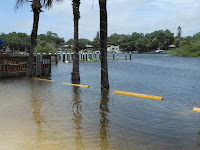 Now back to the floating docks. Even though we don't typically get large tidal swings, floating docks are nice to have. There is a predictability about where the dock is always going to be in relationship to the boat. This makes configuring systems (steps and the ilk) for boarding straight forward, and allows dock lines to be specifically configured for every day use.

There are different type of floating docks, and the style, and design makes them all behave differently.  I have wobbled back to the boat after doing the "Duval Crawl" in Key West. Even though the marina I was staying at had a breakwater, when it got real bumpy outside, it could be bouncy inside. At this marina the floating dock was made of aluminum, and the dock sections were light. With some adult beverages riding around inside you, a breezy day meant you had to turn on the gyro's and energize your sea legs.

The floating dock the Meridian 341 was staying at is made of concrete, and is very heavy. A floating dock is a constrained boat, so it behaves like a hull in the waves, and its motion is affected by wave periods. Short choppy waves meeting a long dock section head on don't have a lot of effect, but longer period waves do. Waves coming in at an angle want to twist the dock section, at least as much as it can.

Some interesting things can happen to the relationship of the boat to the floating dock when they are both sitting in waves. The lighter floating docks react quickly to the waves, while the heavier concrete docks react slower due to their larger mass. In the short (one minute) video the sailboat in the background reacts faster to the wave action then the concrete dock does. At times the boat and the dock move together in concert, but at other times, the dock is going down, while the boat is going up, and you can see the dock lines tighten like an over tuned guitar string. I'm not a physicist, but it sure looked like the stress on the lines could be much higher at times, than they would be if the dock had been fixed. There are proper ways to tie up to a floating dock when it's rowdy out, and they are different from a fixed dock. In the end locally three larger boats sunk, and a bunch of small ones whose batteries life force was drained by bilge pumps that never stopped pumping.

Here is the link to the video showing the sunk Median 341.  It's a train wreck, but worry not, the boat was for sale, and the new owner is the insurance company.