The up skirt danger

The statue "Unconditional Surrender" on the Sarasota bay front has been mired in controversy since it's erection in Sarasota in 2005 as part of a public art program. Scuffles over copyright issues, and as always with public art here the question "Is it really art?", roils through the community. I personally don't think it is any more art, than an injection molded 6" Stature of Liberty" is art, but that's me. I think for many it provides a whiff of nostalgia of times, that in their minds were good, and anyone could grab a stranger on the street and give them a sloppy wet kiss. Do this today, and you will end up in the hoosegow, and get your picture in the paper. 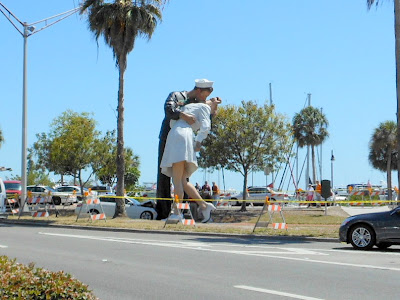 So when the Mercedes smote the leg of Gulliver some damage happened, but this thing has been hurting people since it was first erected. Invariably the first thing a tourist does when they walk up to it is to take a peek up under the nurse's skirt, often cricking their necks in the process. What kind of an example does this set for our youth? Yep, no nostalgia here, just a lewd glance upward to see where those creamy white, very long amazonian thighs end up.

I have seen these less than furtive upward looks a thousand times. This painted cast aluminum photo knock off is at a very busy intersection, which I have now renamed US 41, and Up Skirt. Most people in town would know exactly where I am talking about. 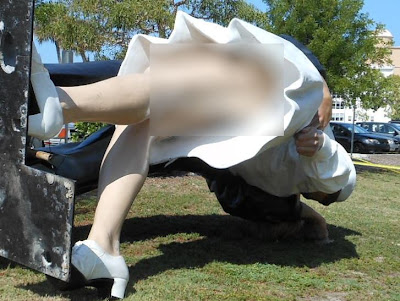 It's now worse, since the damage occurred. Concern for the public's safety required that the statue be laid down, and it now looks like they are doing it by the road. All north bound traffic gets a direct view of those 8' long sleek, very lickable feminine legs, and the nether region they end up in. It makes me break out in a sweat every time I drive by it now. Local chiropractors have banded together to have the city expedite repairs and have it quickly re-erected complaining neck adjustments have dropped off dramatically since the accident.

For gosh sakes, somebody should cover those luscious curvy quivering gams with a tarp before there is an accident. Is there no decency left?
Posted by Bill Bishop - Parmain at 9:38 AM