"Really, that's all I need, just the gateway kit, how much is it? Ouch $250 bucks? Well it is what it is, I guess, and the owner wants to see his engine instruments on his chart plotter." Fast forwarding a week UPS delivers me a box, and I go to the boat. Avidly ripping open the box, I behold the kit before me. There it is in all its glory, a small black box with an LED, and two cables coming out of it. Yep, one of them has a standard NMEA connector, and the other one has a what? It's a nine pin female connector, where the heck does this thing plug into? Wait a minute, it's a kit remember, and in the bottom of the box is another cable, with a nine pin male connector. I plug it in, and then look closely at the other end. Hmmm, it's a male 4 pin connector. Whats this plug into? I can see the entire engine harness, the engine gauges, the control computer, and the device bus, and nowhere is there someplace this four pin connector can go. Rats!


I call the engine builder's tech support department. "What's up with this kit? I can't plug this into anything, and I know what it's supposed to be plugged into. It's not going to fit without a saw." "Well you must have bought the wrong kit then, because if it was the right kit, it would plug in." "Sorry, but I want to politely disagree, the instructions specifically say it's for this exact engine configuration." "Maybe you should just take your boat to a certified dealer, they have been trained to do this sort of technical work." "Listen, it shouldn't require a $100 per hour technician to push in one plug, something must be missing from this kit I need to make it work." "Okay, let me check with someone, hold please. Okay, we don't get a lot of calls about this, but you need another cable." "Another cable? What does that do?' "Well it plugs into the pigtail in the kit that was plugged into the cable from the gateway, and then that cable plugs into the bus." "We sell them separately because we don't know what length you will need." "Okay, but why don't you just put the right bus connector on the gateway cable in the first place, and if you need more cable, sell extension cables that plug into that?" "I don't know I just work here, a 6' cable is $80.00, here is the part number." Okay thank you very much, I will order it from a dealer." 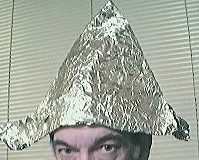 It's "Tin Hat" paranoia time now. You can tell I'm a little miffed (that's not me in the pic) about all of this. A NMEA interface should be a straight forward thing, but in all too many cases it is mired in a collection of expensive bits and pieces that are poorly documented. Manufacturers take standard device communication protocols that are well known, and then twist them around so others can't use them, without being sued at any rate. They then design expensive "Gateways" to let you get at the data, often requiring special cables only made by them. Add to that manufacturers who take standard NMEA 2000 network cabling components, and redesign them so you have to use theirs only, and to interface to a standard network, you have to buy their special adapters, and don't get me started on the costs of all of these pieces. 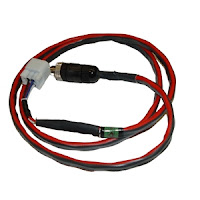 As an example, since when is this cable really worth $120? Seriously, you gotta be kidding me, a NMEA connector on one end, and a Yamaha bus connector on the other. But when it's only made by one company, the sky must be the limit. I should really be in the cable business.

I can't tell you how many hours I have spent trying to get all of the right parts to do an engine interface. Yes I'm smarter now, but only with one scenario, and I don't really know whether this one will work yet. We will find out next week when I get the cable that plugs into the pigtail, that plugs into the cable that is attached to the little black box. What's so frustrating is that so few engine manufacturers post any real information online, and their tech support departments can be vague also. Unfortunately more than a few dealers are clueless, and the online forums are rife with out of date information and part numbers.

Yamaha - Command Link Plus gateway about $250 + extension cable starting at about $80. The original Command Link  gateway is similar, and I don't know if the single cable still works, or you now have to buy the gateway.
Mercury - (Merc Monitor gateway) for up to 4 engines $900. It appears to be a complete kit. A pricing ouch, but you do get a pretty gauge with it.
Honda - No gateway required, cable only starting at $70.00.
Suzuki - No gateway required, cable only about $100.
Yanmar - Newer engines standard NMEA 2000 cable only.
Cummins - Could never figure it out, and neither could the Cummins' people I spoke to.
Volvo - No pricing on their online store website, and none found online.

Regardless how the engine companies choose to package, price, and sell the NMEA 2000 interface, it would be nice for all of them to clearly spell out how it's done, and what you need to do it. It would really be better for all if you engine dudes just simplified, and made the NMEA 2000 interface standard. Some of you get it, some don't. I'm taking the aluminum hat off now, and pouring a glass of whine.