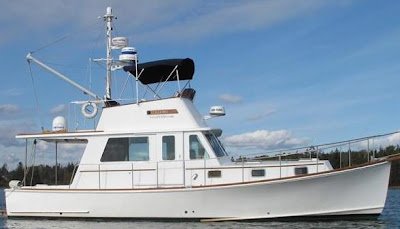 There are many related terms for the golden ratio, and it's close cousin Fibonacci numbers including the golden rectangle, golden mean, divine proportion, and so on. The golden ratio has been around for a very long time. Euclid was the first to actually write it down, but it was in use long before his time. The golden ratio permeates nature and our lives. It's everywhere we look in some form or another. It's embedded in the design of things we use, the art we look at, the colors we see, the music we listen to, and the plants in our garden. Even the stock market does its own golden dance. If the use of the golden ratio isn't intentional, we humans still see the proportions driven by the golden ratio as naturally attractive to our eyes. 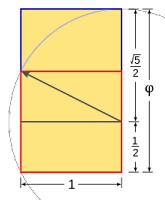 So let's see where the golden rectangle comes from by making one. In the sketch you're looking at, we start with a square (in red). Take the square, and split it in half with a line. Now take a compass and set the distance from the center side of the square, to the corner of the square, and draw the curve (the radius of a circle). Extend the lines to complete your new, and now golden rectangle. That's all there is to it. Your kids could do this in a second, and maybe already have. In doing this though, you will discover that a mysterious number comes from this simple to make new rectangle, and today we call it Phi. Don't confuse this with Pi, although there are some interesting similarities.

We now know how to make a golden rectangle, so let see how it applies to Gizmo. I took the picture, cropped it so we just have the boat in the picture from the water line up, and stem to stern. Did the geometry, and Gizmo is indeed very golden. 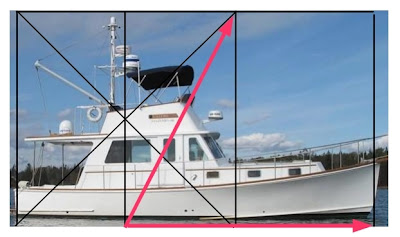 Now lets look a little more closely at our newly made golden rectangle. It has been made out of one side of our original square (A), and there is the new part of the rectangle side we added (B). Now this is where the magic occurs.

What happens is the ratio of A+B to A is 1.6180339886. Big deal you say. But it's also the ratio A to B and exactly 1.6180339886. Looking at a Fibonacci number sequence, the ratio between any two consecutive numbers is also very close to the golden ratio, and it gets closer the higher the numbers get in the sequence. Who would have thought a number sequence, and little bit of simple geometry would end up at the same place. 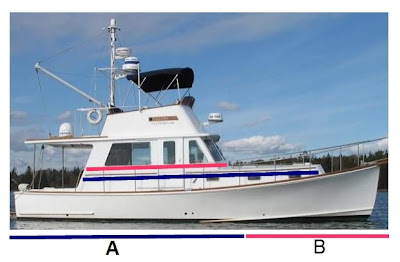 I took our two line segments A and B and looked to see if there were any other relationships with Gizmo, and yes there were. Our line segment A is the length of the entire cabin, and B is the length of the salon part of the cabin. Was this by design? Or did this just happen because to the designer the proportions were pleasing to his eye? In my case, Gizmo was the first boat I looked at, that in my mind looked golden, and it was. I didn't have to look very far. In many boats I found similar relationships. 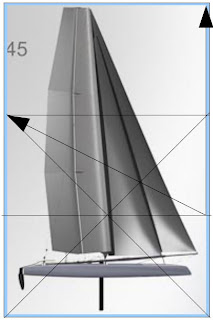 This is an AC45 America Cup boat rendering I borrowed from their website, very golden. The top of the sail is really that shape. The AC72 hull beam and length is also very close to golden, 72' x 46' vs 72' x 42' which is the perfect golden rectangle. Close enough for government work I say.

Okay, one more of the many twists on the ratio. Looking at the little line drawing above again. Segment B, is A x 0.6180339886 (the reciprocal). Now take B x 0.6180339886 to make a new segment C. You now have the exact ratio of the lengths of your three finger bones. It's pretty weird, and wonderful at the same time

Look around you, it's everywhere. The shape of your drivers licence, credit card, post cards, the usable screen on an Iphone, the shape of an Ipod, or your computer monitor. The old original Enterprise star ship, not golden at all. The newer movie version, perfectly golden.

By the way, Phi, like Pi is also an irrational number that never ends. So if you feel the need for a little bit more precision in your now more golden life, I have provided some more decimal places to use.


Many thanks to Dick Reston for his constructive formatting suggestions, it is better, and Ben Ellison for the use of his "Gizmo" photo.