I know you're thinking this installer leads a glamorous life always attending store openings, conferences, hobnobbing with the rich and famous, and passing my Grey Poupon to the Bentley next to me. But in the real world most days are just spent grinding it out. Today I am upgrading a Garmin 5212, installing a couple of cable TV boxes, and finishing a KVH M1 satellite  system install (I'm writing a 101 piece on it). But every now and then I get something interesting, and different to do. This is the case with the systems you see mounted below. 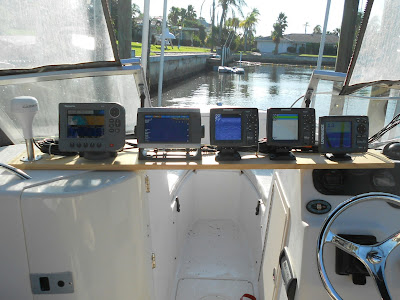 This is a project I did for Practical Sailor magazine who were testing five small moderately priced chartplotter/sounder systems, and Garmin's GDL40 weather receiver. The trick was to be able to get all of this easily usable in a small split console boat. Units being tested were the Raymaine A70, Garmin 740S, Humminbird's 798 and 788, Lowrance Elite 5, and the Garmin GDL40. 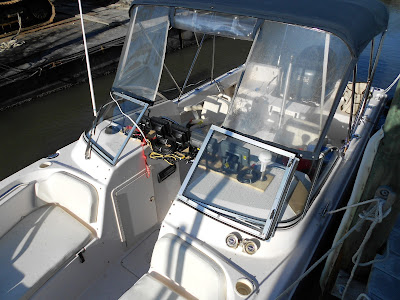 I was familiar with the boat, and had previously installed a small Garmin charplotter/sounder in it. So out comes the tape measure, some beard stroking, and a solution. All of the systems would mount on a 1" x  12" plank that would straddle the two consoles. A strap, and some tie wraps would keep it in place. A power strip was installed, along with a 16' 10/2 power cable with battery terminal connections installed. All of the transducers were connected, and about the first 8' of all of the cabling was tie wrapped at 1' intervals. Each of the transducers remaining cable lengths were coiled, labeled and placed in a bag. The bag had handles which could hook on the end of the plank allowing the whole configuration to be picked up lock stock and barrel. I loaned them my 110VAC to 12V transformer so testing could be done away from the boat if desired. I also put some extra effort into making everything nice and neat because it was going to photographed. Its 15 seconds of fame would come. 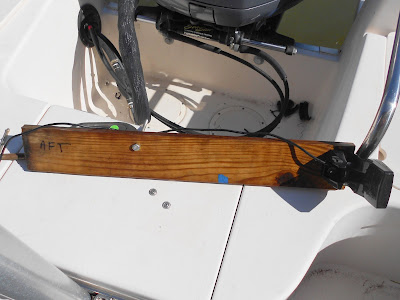 The actual install on the boat just took a few minutes. Secure the plank, take the harness and run it down the side securing it with tie wraps, connect the power, and it was ready to go. The transducers were mounted, one at a time on a 1" x 4" plank. A long bolt was glued into the plank that passed through a scupper. It was secured with a fender washer and a wing nut. The top of the plank was secured with a C clamp with silicone bumpers to protect the fiberglass on the transom. It took about 5 minutes to release the plank, take off one transducer, and install the next one.
One the whole it was a fun and interesting project, and the whole assembly is reusable for future projects. If you want to see the testing results, the GPS testing is available online now at Practical Sailor, and the sounder portion will be in next months issue. And yes, you can borrow my Grey Poupon mustard, just be sure to return it. No chartplotters were hurt or injured during this project.
Posted by Bill Bishop - Parmain at 8:15 AM