The urgency was palpable in the service writers voice on the phone. "Could you please go and fix this guy's problem". "What's wrong." I said. "Well he needs a software upgrade on his C-120, he has a cut radar cable, and the boat has to leave tomorrow." "Alright" I said looking at my watch, I will see what I can do". It's nearly 3:00 on Friday afternoon. I pack up my stuff and head to the marina. The boat is a larger walk a round, and the owner meets me with the cut cable in his hand. "What's up with this?" I think. I start to look around, and I climb up onto the deck and survey the hardtop. I'm no rocket scientist, but my keen eyes observe that the radar isn't there, and I start to have the dawning epiphany there is more to this than I was told. 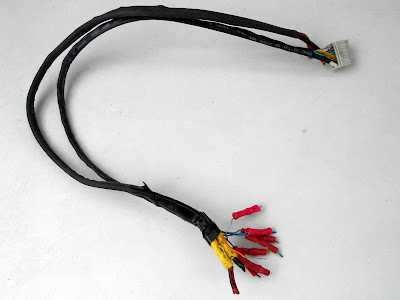 The radar cable on the hardtop is swathed in endless layers of sticky white tape, and after it's cut off, the amputated stump of a radar cable is exposed. I look around, and then spot the Raymarine radar unit laying on it's side in the back of the boat. I look at my watch again and realize that I'm most likely to lose several hours of happy hour drinking time I'll never ever get back again, and with a sigh I start.
The owner and his friend help me hoist the radar onto the hardtop, and I plunk it into place, and stare malevolently at the mangled cables. "Why did someone cut the cables?" I asked. The owner starts to tell me a story that goes something like this. He has shipped the boat from the north down to Florida for several years, and the first  time it was shipped, the transporter cut the cable, and it has to be spliced now every year. My inner voice says "The first shipper was a "Class A" moron, a small screwdriver would allow the connector to be removed, and the cable could just be pulled out." But it is way to late, and this is now an immutable event. My outside voice says "That's a shame, but I can splice it." 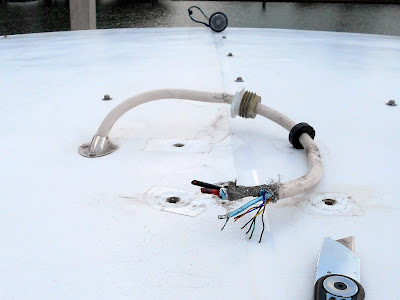 In a little while I have the cable spliced, and the owner and his friend are busy down below putting on the nuts and washers. I close the radar, climb down, and fire up the gear. While I'm doing this the owner tells me more about the shipping of the boat this time. It seems the marina was moving the boat on a trailer before shipping it, and went under a bridge at thirty miles per hour, and ripped the open array clean off of the pedestal. I stop and listen carefully. "What happen then?" I ask. Well it seems that they removed the pedestal, and gave it to someone to get a new array. I'm staring at the radar display, and it isn't painting. I do the self test, and everything is reported as okay, including the video link. The array is spinning, but no joy with targets.
The owner continues his dialog by saying the guy who put the new array on, couldn't test it because he no longer had access to the display. My inner voice mutters, "The miscreant who did the repairs just assumed it would work, and didn't bother to check it." My outside voice just goes "Huh?" I look at my watch, and it's 5:05, and there will be no tech support until Monday, but I already know what they are going to say. I'll call and ask if having the radar impacted at thirty miles per hour by a bridge could have damaged something in the radars core pack? Then I will cringe and wait for the response which will be something guffawed out like "Do you really think so Bill?" Then we will have a short conversation about what could have failed, followed by it will have to shipped back for repairs. Sorry guys, but we will have this very short conversation on Monday morning. Meanwhile I double checked the splice, but to no avail. I taped up the power wires, and left a note inside the pedestal with the prurient info for the next tech, who will be then more in the know then I was. 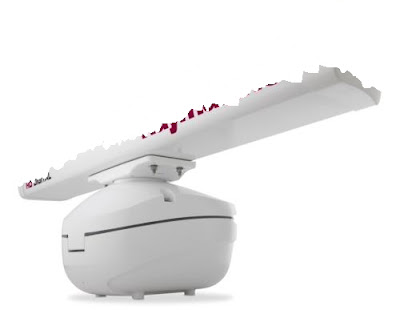 The owner, and his friend were really nice guys who helped when they could, and steered clear when they couldn't. I left to have a needed adult beverage and, came back on Saturday morning and did some additional training 101 on the C series display, and proffered some advice on how to get to Ft Myers. All of this would have been easier if not for the problem of "What we've got here is......failure to communicate."


You can hear the original quote from the movie here.


The Parmain laboratory simulated what the array might look like after the bridge impact. I think it would have actually looked much worse. Say Bob, did you hear a thunk when we went under that bridge?
Posted by Bill Bishop - Parmain at 12:23 PM