The excavation, it's all your fault

Yuck, it was disgusting, and time to get the rubber gloves out. A half eaten bag of chips, old rusty fishing hooks, a foil pack of Trojan eye glass wipes, mildewed papers, and a leaking bottle of suntan lotion giving everything a lubricious sheen. The sad reality of this eclectic collection of sea going goods, is they will end up on the deck when I drop the hatch fully down. Just to make it more visually interesting for me, it will start to ooze some suntan lotion mixed with assorted detritus onto the deck. 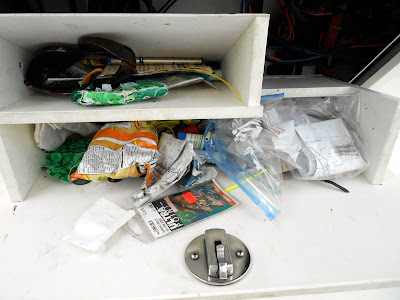 This is all my fault, so it's purported. It was alluded that during my efforts to re-install a GPS, and VHF antenna, after new T top canvas was installed, that I left the battery switch on "All" and then turned on the ignition switch located inside the console behind a hatch. This would never been done by the owner, and since I was the last one who was on this immaculately kept vessel, it had to be me. The end result is the four year old batteries are drained. Could I have been responsible for such a nefarious act? I suppose it's possible, I could have blacked out and have done it without knowing it, or maybe it was just my evil twin who crosses over every now and then from a parallel universe.

Despite the fact that we had weeks of daily downpours, the boats drain plug was in place, and a there was a dry bilge, it wouldn't have been possible for the bilge pumps to drain the batteries, and the owner would never have left the ignition, and battery switch on. I sigh, and sense the sweet odor of earned money start to evaporate, and say "I will throw a charger on the batteries for you." 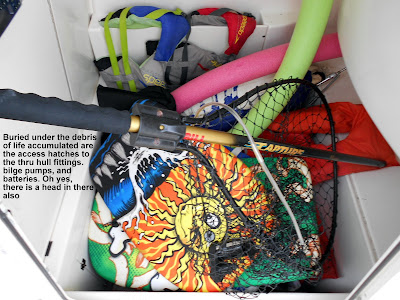 In order to get to the batteries, some excavation is required. I go to the truck, and get my Indiana Jones leather hat, bull whip, and shovel, to do the digging. The top layer of artifacts, consists of things too big to be buried lower, and it starts with a fish net which comes out after about three tries in this confined space carrying a few other things entangled with it. The next strata is a series of kids swimming toys, and noodles. Now we get down to the common era of life preservers (The Floatazoic). You can progressively date their age by noting the increasing amounts of mildew as you get deeper in the excavation.
We have now reached a very early time period, as signified by a layer of very stained compressed damp clothing, rain slickers, and other not easily identified objects all giving off a strange vapor, which is collected for later lab analysis. Finally a hard substrate is reached making this the earliest time period in this dig. If you look closely, you can see the small black objects on the floor. These are fossilized trilobites, which indicates we have reached the Cambrian period which makes them about 500 million years old, or in boat years about 5. An early primitive ceremonial feces deposition urn was also spotted in the excavation, but the workers fearing it might be cursed, refused to open it. 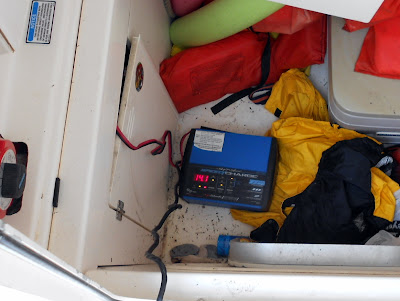 With a few gyrations I was able to crawl into the small excavated space and pry open one of the crypt doors after checking carefully for booby traps, Nazi's and flesh eating beetles. Peering into the dimly lit cavity I spotted the sarcophagus, and carefully slid the lid off exposing ancient battery terminals. The charger leads are clipped on, and "it's alive". I break for lunch, and an hour later the boat's lift is lowered, and the engine started. While it's running, the artifacts are returned to their original locations, with the same careful attention to detail that was used to remove them. The only problem is now there is a furry black spot on my hand that is quickly growing, and I want some steak tartare.
Posted by Bill Bishop - Parmain at 8:57 AM