Why didn't I think of that? Outboard lower unit salvation.

I have always wondered why, at some subliminal level, when you tip back a modern outboard motor, a little bit of the lower unit always remains in the water. Maybe the reason for this is to insure that one of the most vulnerable portions of the motor stays in contact with the salt water to insure galvanic corrosion will occur, and hence new parts will be needed. Or maybe there are unknown mechanical reasons why the motor can't be lifted that last six inches or so to clear the water. I mean we went to the moon didn't we? So I was most surprised when I encountered two boats next to each other, one with this nifty little box under the lower units, and one without the little box. 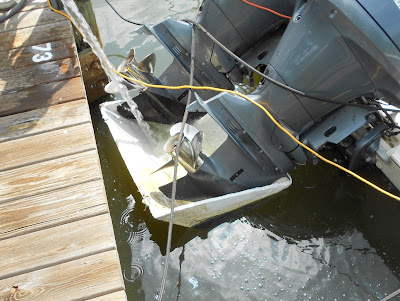 The box is made out of fiber glassed Nida-Core type plastic honeycomb panels, and painted, or gel coated white. Its light, and it floats. There is a line that attaches it to the dock to keep it from going on a walkabout. You can see in the picture above that there is no evidence of corrosion or marine growth, and the little bit of bottom paint on the lower units is just there for when the boat is away from home dock. When it's inserted under the drives, a little bit of water gets into the box, but it quickly evaporates, along with any rainwater. So in short, the little box electrically isolates the lower unit from the seawater stopping, or certainly slowing any galvanic corrosion, and it stops marine growth from getting a grip on the lower unit. 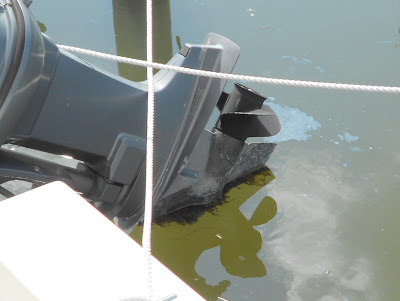 Now lets just take a quick look at the boat that is right next door. It also has bottom paint on it, at least of some vintage, but check out that ZZ Top style marine growth beard it's sporting, and there is some corrosion evident on the skeg. I'm also sure the pitot tube opening is thoroughly plugged up. The boat with the little box is owned by Jim Gillespie, and it was a great idea Jim. You motor builders should figure out a way to lift those motors just a little higher, and you would sell less parts damaged by corrosion, oops is that a disincentive?


A small author's postscript to the story.


After reading some comments on some of the forums, I spoke to Jim again about the little box. He does try to keep it pumped out, although he does not worry as much about it having fresh water in it. The box has been in place for about four years now, and there was a 110 volt pump that had its hose attached to the box, but it has broken, and has not yet been replaced. If there is a lot of rain, a manual pump is used to lower the water level in the box. As mentioned by others, there is a zinc on the motor mount, but having the lower unit out of the water reduces the opportunity for galvanic corrosion that is so commonly seen on many outboard motor skegs. Many thanks to the C-Brats forum users for their insightful thoughts and comments. Bill
Posted by Bill Bishop - Parmain at 7:20 AM