In the beginning God created the heaven and earth. And the earth was without form, or void, and darkness was upon the face of the deep. "Um Dad? can I ask you a question?" "Make it quick son, can't you see I'm busy?" "I know, but are you going to leave all of those quantum strings you're using just laying around for the inhabitants to find?" "Don't worry son, when they find them, and figure out how to use them, I will just get really far away. I don't need the tan." Now go back, and keep practicing on Pluto, it looks like a potato for gosh sakes. Let me be. I barely have a week to get the job done, and this photon stuff is very tricky, but if you're good, we can play Asteroids when I'm done." "Thanks dad." 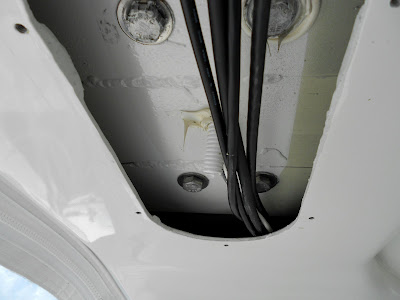 String theory is the right term because I rarely actually see it in real practice. Since it seems to be so rare, I thought I would take a few minutes to illuminate the novices on how it is used, because it seems to be beyond the professional's grasp. Note the pic above. Despite the fact a whole new nav system was just installed in the boat, not a single string, or in the parlance of the Installer "Pull Wire", was left behind, much to my abject chagrin. 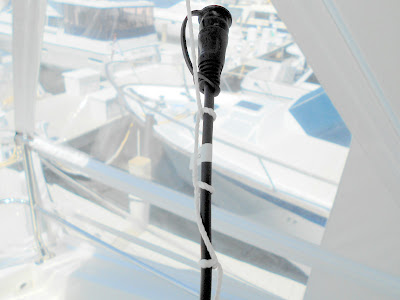 Today the secret word is half hitches. This is an ancient knot, and even the alcohol addled should be able to manage it. Here are my tips. Always attach the string to the cable, and never directly to the connector. Tie three half hitches on the cable so the pull end of the string tightens them when you pull on the string, and wrap it all in electrical tape. Okay, now send the children out of the room. There're gone? Good, here is the secret. When you tie the string on, leave about six inches extra at the bitter end loose. 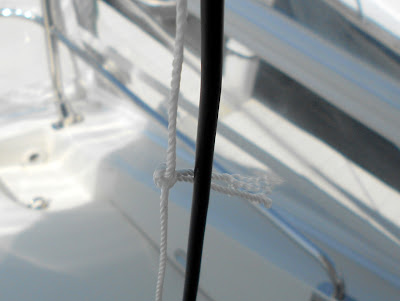 Grab your roll of string, and tie another long piece of string to the six inch end you left loose on the cable. Elapsed time, about ten seconds. Now when you do the pull, you're pulling along the replacement pull string. Easy wasn't it? So why don't builders, and more installers do this? I tried to get congress to pass a law about this, but it got stuck in committee because of arguments over what type of knots, and string to use. 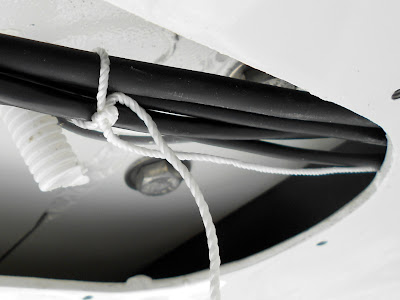 You can let the kids back into the room now, and when they ask how you got the new string into the pull, you can just smile inscrutably, and say it's magic. It just drives me nuts, and the ten seconds it takes to leave a replacement pull, pales in comparison to the time required to fish a new pull string in from scratch. Just saying.


A good site on string theory can be found here.
Wikipedia's list of knots.
Posted by Bill Bishop - Parmain at 8:59 AM