Stiffening up a small Garmin GPS

I have thrown, metaphorically speaking, a zillion of these small Garmin 4x and 5x chart plotters into boats. They are compact, full featured, and a good choice for smaller boats. In most cases they are good to go as installed, but on occasion it would be nice if the mount was a wee bit stiffer. Don't despair, there is an easy way to make the mount a little stiffer, for under a dollar or less, even if you're paying full retail. 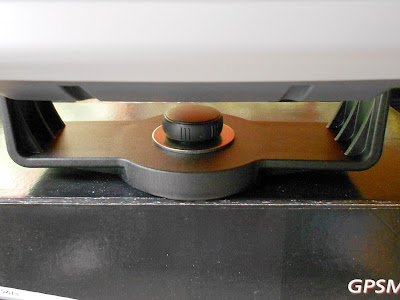 The answer is simple, just place a fender washer under the knurled twisty knobby thingy that holds down the mount. The larger the washer, the stiffer the mount becomes. For picky owners, I take the fender washer and give it a couple of coats of fast drying (time is money) black spray paint.
There is another gadget in the Garmin collection that can also be put to good use in my in-situ world. This is the wire cover you get with a Garmin transducer. This little gadget can be gracefully modified to make an attractive wire pass through for both the standard small Garmin's, but also for their "S" series that has the second transducer wire. 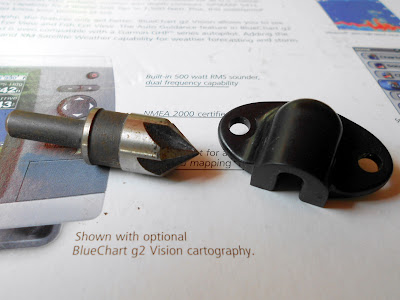 I used a countersink  to open the wire pass through hole to the same diameter of the inside opening resulting in a cover that will accommodate both the Garmin wires. In the picture below, there was already a hole for a similar Garmin unit the previous owner had removed prior to selling the boat. A SS clam shell would have looked out of place, and the transducer cover worked well. It was also at hand. 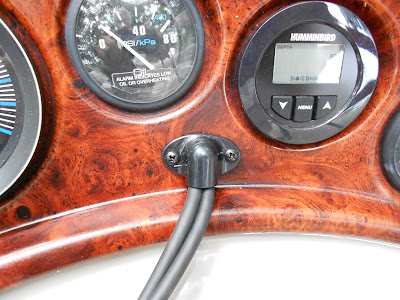 Just a few personal thoughts about removing electronics from your boat prior to selling it. Sometimes this is a good idea, and sometimes it isn't. If I was shopping for a boat, I would be reluctant to buy one that had a dash full of empty cutouts and old unfilled screw holes. This invites potential buyers to look into those holes, and see how dirty messy, and corroded, the insides of the consoles often are. In the case of this boat, everything had been removed, including the transducer (may a thousand fleas infest his underwear). The holes were over filled with black goo of some sort that was difficult to remove, making re-installation a P in the A. I often suggest that if you're going to remove the electronics, leave the transducer in place. I can usually cut off the old plug, and attach a new one to make it work with other systems, and not properly filling the old holes below the water line can result in potential damage to the vessel including sinking it. In most cases I think owners that do this sort equipment removal are often being "Penny wise, and pound foolish." If you're buying a boat that someone has removed all of equipment from, look twice, and very carefully. If the owner was that cheap, he may well have cut other corners in the boat also.
Posted by Bill Bishop - Parmain at 3:31 PM