"What's the most exciting thing that has ever happened to us" asks Kate. My first reaction was that god awful storm we sailed through on Georgian bay. Kate says "No, I think the shuttle launch", and she was right. We left the house at 1:00 am, and drove to Titusville. We arrived a bit after 5:00 am at a large hotel's lobby jammed full of reporters, camera crews, and NASA contractors. We find our host, grab some bagels, are given our passes, and hop into his car. Every square inch of the causeway's shoulders going out the space center is jammed with vehicles. We get checked through the main KSC guard gate, and then through another check point, and drive up to the observation area set aside for employees and contractors. We are now about three miles from the shuttle, with a clear view, and as close as NASA will let unprotected personnel get. It is now about T minus 30 minutes, and counting. A long row of metal bleachers are set up with a PA system that's providing the communication feeds between the NASA centers, and the shuttle. We have our host from Morton Thiokol on one side of us, and a group from Rockwell on the other side who are translating what is happening. 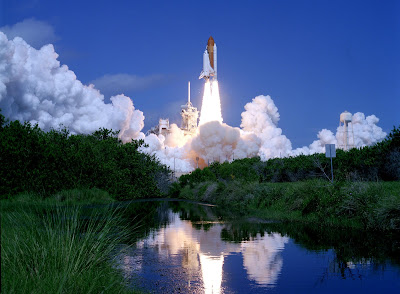 Time seems to speed up, and it is now T minus 20 minutes, and holding for final briefings. In about 10 minutes, the countdown proceeds. The countdown stops again for a mandatory hold at T minus 9 minutes. The countdown proceeds. The automatic ground launch sequencer takes over, the access arm retracts (T-7), the beanie cap lifts away (T-2), It's very quiet now. All of a sudden, you can see the light from the ignited main shuttle engines, then the smoke from the just started solid fuel boosters. A wave of birds suddenly takes flight moving towards you, and oh my god the staggering volume, and intense crackling from the solid fuel boosters strikes you. The bleachers are vibrating, the light is blinding, and the shuttle starts to very slowly rise. Each one of the two solid fuel boosters will produce 1.2 million pounds of thrust with a violence that shakes you to your very core. The shuttle clears the tower, and starts a graceful rotation onto its back and heads out over the Atlantic ocean. The "Go at throttle up" command is given, the boosters separate at about two minutes, and the shuttle disappears from sight. I start to breath again, and pry my fingers away from Kate's. Even if you have seen many launches from this vantage point, I can't help but to think each one is breathtaking to behold. Such awesome techno0logy, such raw power!
When you're in the rocket business, everything is on a large scale. For example solid fuel rocket motor segments are transported in specially built over sized railroad cars, but many of the larger components, and materials can only be shipped by water. So it should not be a big surprise that the majority of NASA's manufacturing facilities are located on navigable waterways. NASA actually manages a substantial, and varied fleet of specialized vessels for this purpose. 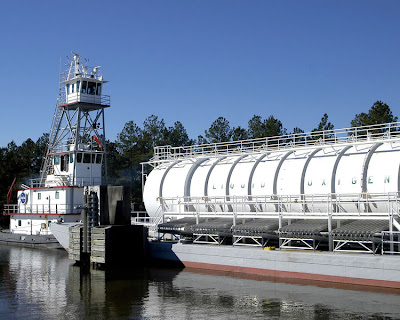 The tugboat Clermont II was built in 1982, and is currently NASA's current primary tug. It is seen above pushing a liquid oxygen barge. The Clermont II replaced a most interesting NASA tugboat the Clermont which was launched in 1965. This unique vessel was actually designed by NASA's Marshal Space Flight Center. This tugboat had two interesting features. The first was it could function as a fire boat.... 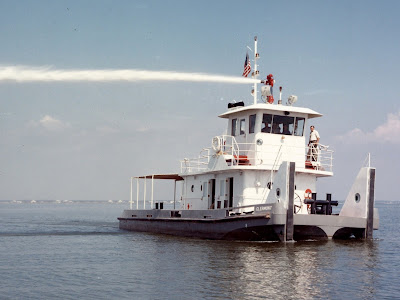 And the second feature was it was powered by a 450lb 1000hp turbine jet engine. As far as I can tell this was the first, and last tugboat so equipped. I have looked for some history about what has happened to the Clermont, but the best I have been able to dig up is this 2008 photo of her looking somewhat derelict. This would be an interesting fixer upper project for someone with a historic bent, and some jingle in their pocket. 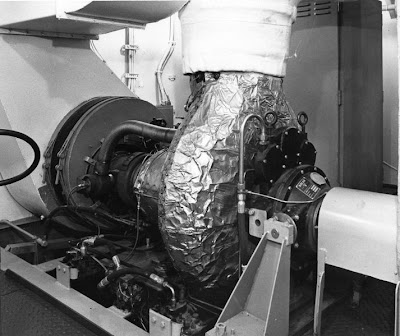 Although the Pegasus barge isn't exactly winged she has been the primary transporter of the shuttle's external tanks from NASA's Michoud Assembly Facility in New Orleans on the 900 mile trip to the Kennedy Space Center. At 266' in length, and a beam of 50' this crewed ocean capable barge has been in service since 1999. Its long term fate is not known, but with the shutdown of the space shuttle program it is likely to end up in the auction yard. 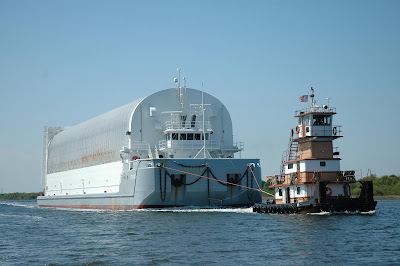 A lot has been written about NASA's two most known boats, the M/V Freedom Star, and M/V Liberty Star. Both vessels were built in 1981, and were designed specifically to recover the spent solid fuel boosters. The ships locate the barely floating boosters, and dive teams deploy to place caps on each ends of the boosters. Air is pumped into them displacing the water, until the majority of the seawater is removed, tow lines are attached, and the boosters are hauled back to the Kennedy Space Center. Despite the fact the each twin engine vessel has 2900hp, the vessels are also equipped with two auxiliary water jet engines that are used to protect the manatees while traversing the Banana river portion of the trip. 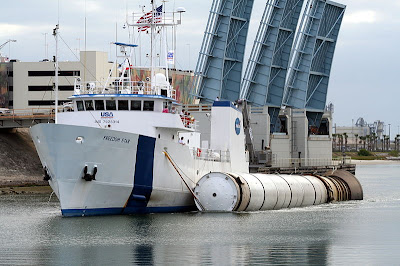 I'm not sure  about NASA's future, funding and mission. I do know that with this weeks launch of Atlantis, for the first time in fifty years we no longer have the capability to place a person in orbit, and we now must depend on the Russians to provide transport. We have gone from being the premier creators of space technology, to just another player. Although I applaud the concept that space travel can be completely privatized, I suspect that in the long run the forward thinking vision that NASA has provided to all of us, for all these decades will just slowly start to fade away. I fear that thrilling moments in my life like Alan Shepard taking the first manned flight, the Apollo missions to the moon, and the Hubble space telescope repair mission will not be available to our future generations, and that would be a shame. Kate was right, seeing a shuttle launch up close was the most exciting thing I have ever done, bar none. I will never get to see another. 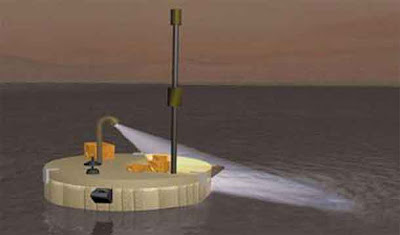 The picture above is a NASA concept drawing of a boat that could possibly be sent to Saturn's moon Titan, and would land on one of two large liquid lakes. Now that's going boldly to where no man has gone before.
Sailing with NASA blog
Booster recovery ship operations
NASA test facility barges and boats
An article about some of the thousands of NASA's spin off technologies. 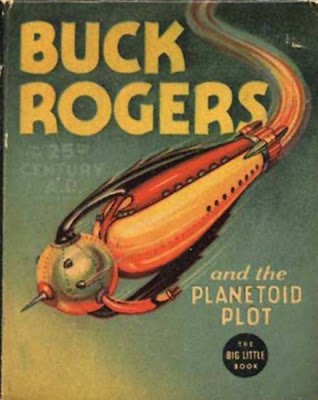 You know as I kid I thought we would all have flying cars by now. I'm not complaining, I am grateful for all of the technologies that have come out NASA's space programs, so tell congress to not be short sighted, NASA is important, and always has a huge technology payback. I think the same about NPR and Public Television, they are just as important to me.
Posted by Bill Bishop - Parmain at 10:54 AM