My reactions were a bit mixed when I first saw the cardboard vessel designs, and they ranged from "That should work", to "Oh dear, what were they thinking". But much to my surprise, all of the boats actually worked surprisingly well, and a lot of thought had gone into what essentially was a construction period of not more than a day. This is one competitive, large, and very unique family. 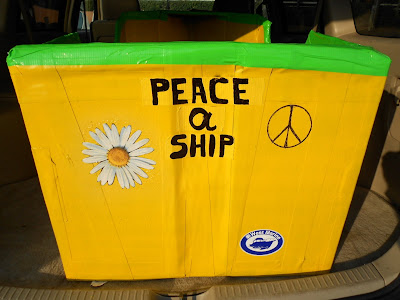 Here are the rules: The boats must be made of cardboard, you can use any fasteners you want, no two part glues, or two part coatings are allowed, any tape can be used, no motors, and the course is about 100 yards long. The first boat across the line is the winner. The participants are all part of the 50+ members of the extended Chappell family attending a reunion in Sarasota. Teams were purportedly made by drawing names out of a hat, but in truth, I suspect that there was some Machiavellian team member manipulation involved here, just thinking.
So lets take a look at what the teams hath wrought. Team Furious built the little red boat that I will call the "Mortar Box". The team members were Ryan and Alex Putch, David Vershum, Patrick Kelly, Keaton Chappell, and Travis Holden. At barely 4' in length it is the almost the smallest boat of the lot, and at first blush it doesn't appear to offer much in the way of flotation. The little boat however has a secret weapon.  If you look closely, there are a series of  4" cardboard tubes strapped to the undersides to provide more buoyancy, and they help stiffen the boat's sole. The cardboard tubes did not appear to be coated, but they were substantial enough to last the race, and to play with afterwards for a while. Materials included some Gorilla tape, traditional duct tape, masking tape, and red paint. 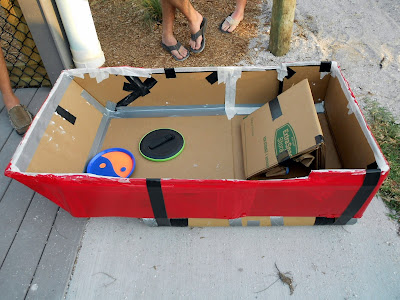 Team "Peace a ship" members Callie, and Kathi Chappell, Luke Nicholas, Scott Holden, and Callie Vershum created the yellow "1967 Summer of Love" painted vessel. Their approach was to use the very rigid cardboard from wardrobe boxes, along with the liberal application of Gorrila tape everywhere. The cardboard was sealed from the waterline down with West Marine's liquid electrical tape brush applied, and the colorful finish was Krylon paint. I don't know what marine chandlery the daisies came from, but they were the piece de resistance, of its period exterior finish. 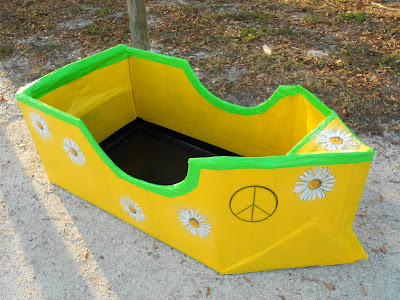 The side cutouts were devised to support the cyborg based propulsion system. I'm sure young Luke spent the day before the race in the Biotank growing these interesting color coordinated appendages. 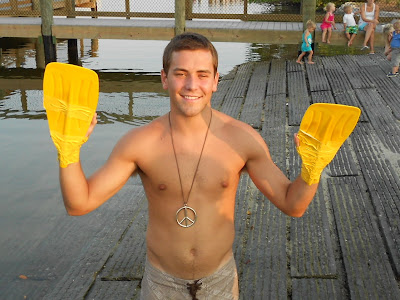 Next on the list is "Cat we all just get along" built by Greg, Andi, Leo, and Catie Chappell, and Devin Putch. This was the largest, and by far most complex cardboard ship built, and the only one capable of a multiple crew member payload. This was also the only vessel that used sheet rock screws as fasteners. The water sealing coating was a silliconized white roof paint. 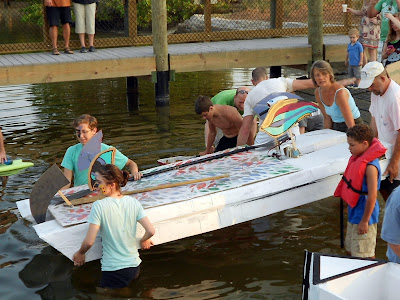 The platform was supported by two heavy cardboard tubes. It's not that I'm not trusting, but I did tap on them to verify that some PVC pipes did not accidently sneak into the construction mix. 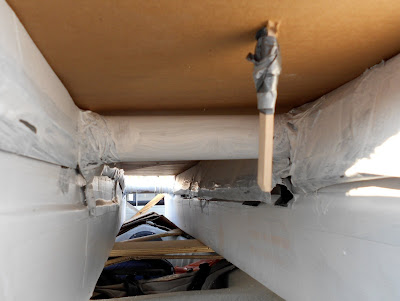 The team "Corona Crew" consisting of Vic and Marilee Conant, Con Nicholas, Nancy Chappell, and Robert Thomas entered the smallest boat in the competition, and it appeared to constructed largely from Corona Beer boxes. Since the rules didn't exactly specify that a person had to be in the boat, it was qualified, but since a Gerbil couldn't be found to operate the boat, it did not race. I think so much time was required managing the clan, and their event schedules they just ran out of time. The last vessel on the list, the "B.B Kings" is a canoe-esque vessel on steriods built by brothers David, Gary, and JR Chappell, along with Landon Shoeuberg. This team located a cardboard distributor, and bought a large amount of 1", and 1/8" thick cardboard, and bonded the vessel together with contact cement. The white hull sealant was elastomeric roof paint. 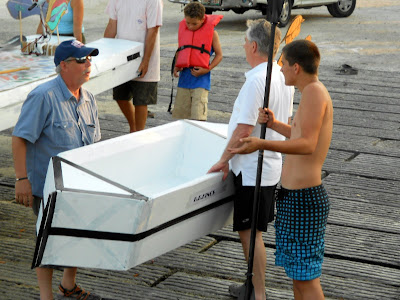 The boats are placed at the start line at the Turtle Beach boat ramp, crews get settled in, and off they go creating a flurry of human powered splashing. 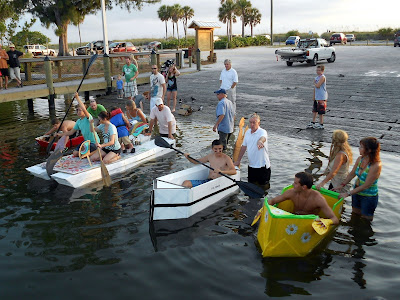 The race was exciting, and the participants were urged on by the crowd, which by now had grown to include lots of innocent bystanders who were wondering what this commotion was all about. The results were surprising.


The "Cat we all just get along" team moved quickly off the start line and into first place, but the crew had some difficulty in steering the course line. In attempting to overtake the Cat, the B.B King's vessel violated their right of way resulting in both vessels colliding together and turning them both sideways. This allowed Peace of ship to reach the half way point first, and get a quick turn around. The BB Kings recovered from the mishap first, and took off after Peace of ship. In the last 25 yards, Luke from Peace of ship, did a recent Dale Earnhardt thing, and just ran out of paddling gas, and he was overtaken by Landon in BB Kings boat who were the winners. Peace a ship followed quickly for second place, Then Cat we all just get along came in third, and Team Furious came in fourth. What fun! 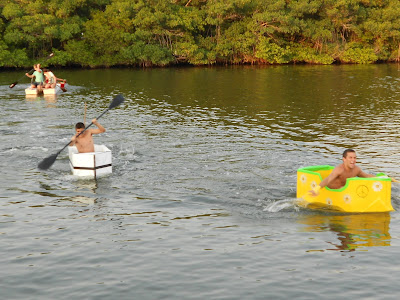 In the end, if the minor collision had not occurred, it would be anybody's guess what the results could have been. I think the catamaran was actually the fastest boat, but since there was no crew practice, it was a bit of a handful to manage. In the end, all of the teams were winners. 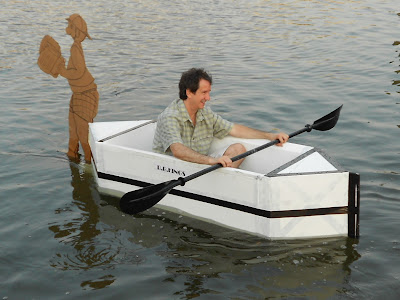 The race was huge fun, and in my capacity as an ersatz judge, I am going to make some additional awards.
The first category is the "Form follows function" award which goes to Team Furious's little red boat. This minimalist approach worked very well. With larger paddles, and if the tubes had been pointed or more rounded, it would have been a serious contender.
In the category of "If I had to pick a boat to paddle from Key West to Cuba" the award goes to the B.B. Kings boat. Very sturdy, well thought out, and good use of materials. The only issues the boat had were some difficulty in turning, and the after thought added keel became waterlogged.
The award for "Best boat as a metaphor" goes to Team Corona. The little boat did float, they just forgot to bring a gerbil, or cat to operate it. "Using a cat would have been hilarious", said my greyhounds.
Team Cat we all just get along is awarded the prestigious 'It was really complicated to build, but carried the largest payload, and had sheet rock screws in it" award. it was structurally sound, very fast, and the kids played with it until dark.
The very special "Installers favorite" award goes to Peace a ship. Surprisingly quick, very sturdy, and if young Luke had had a kayak paddle, or a couple cans of Red Bull, he would have felt the force, and I think could have easily won. I also liked the vessel name, go figure. Luke is still in the Biotank trying to get his hands to grow back. Leo, and Louise Chappell would be very proud of their legacy.


You can see a preliminary 1st edit video of the race shot by JR Chappell here. Many thanks JR.


The greyhounds were most disappointed that no cats were used in the event.

I have become fascinated with the subject of cardboard boats, and I'm floating the idea around here locally as a possible charity event, we will see.


Here are a few links about cardboard boat racing, and much more is available online.