For starters, I love this boat. It's a stunning Nordhavn 50' pilot house trawler, and it's substantially built to say the very least. The short summary of the work done was to update aging electronics at the helm, provide better integration of the systems, and to end up with hopefully a factory new appearance. This little story as much about the process, as the technology.


Welcome to "Grey Goose", she is beautiful, close to perfect in all respects, and has been meticulously maintained by her owner Don Payzant. 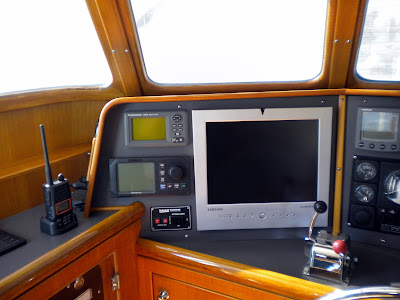 At the helm was a PC based navigation system, six Raymarine ST60 instruments, two decade old Raymarine radars, and in the master suite, a Raymarine ST70 display. New equipment selection for this type of project can be driven as much by the space available, as the technology. A considered option for the new system was to use new Raymarine gear to take advantage of the existing ST60 displays, but the E-140 wide just would not fit in the port side panel, without a substantial rearrangement of existing systems, so Garmin equipment was selected. The new Garmin equipment consists of a 7215 chart plotter, two 5208 chart plotters, seven GMI10 data displays, 404 xHD open array radar, 24" HD radar dome, Airmar PB 200 weather station, GXM51 weather receiver, two GPS 17 N2K units, a new transducer, GSD22 sounder module, and the new multi zone Fusion stereo.


In the mix are also exterior cameras. VGA interfaces to the TV's, audio feeds from the GXM51 receiver, integration to the existing autopilot, entertainment systems, and many other tasks. 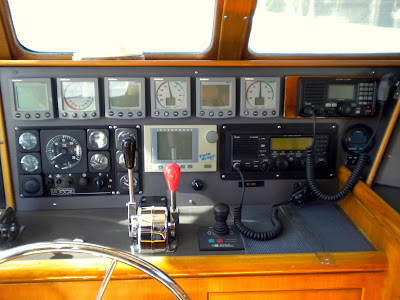 At first blush, the process seems simple. Remove all of the equipment from the console panels, have new overlay panels made for them, re-cut the panels for the new and existing equipment, and then install the equipment, both new and existing. When I look at this type of job, I hold my thumb out at arms length, sight down it, cogitate for a few moments and say, "let me think for a while about how much all of this will cost". I then take pictures to aid my memory, and I go back to my office. Step one is to do an equipment bill of materiels, and in conjunction with this I do block diagrams to help me understand how all of these technology puzzle pieces will fit together, and where the wiring pulls are. In the end I settle on a man hour budget, and provide the owner with the bill of materiels, the block diagrams, and the labor estimate.

The unsaid here is I know that I will encounter problems that I didn't anticipate, it is a boat after all. I depend on my experience to find solutions for the problems on the fly as they are encountered. In this project, as in all projects, there were several problems, but Don, the vessel's master, had capabilities that I wasn't aware of that amazed me, and I will get back to this subject later. 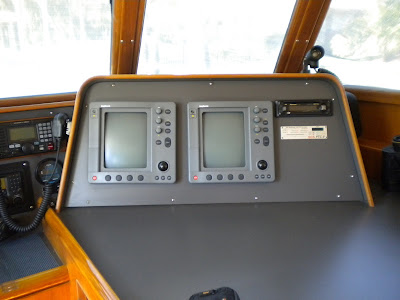 Out go the old panels, and all of equipment leaving gapping maws filled with wiring. Again my camera is used to document the wiring, and close ups are taken of the connections to make sure it goes together again correctly. In the beginning of this process, only the far right, and center panels were going to be overlaid. It appeared, using the template, the 7215 would just cover the old hole in the port side panel where the PC monitor was. The rule of unintended circumstances raised their ugly head twice, when the 7215 didn't quite cover the monitor hole, and then Jeremy snapped a rotzip blade and marred the Formica panel. At this point it was decided all of the panels would be overlaid. In the end, this was a good decision because it gave the entire dash panel set a consistent appearance, and I paid for the panel that had the  Ruh-row" accident. 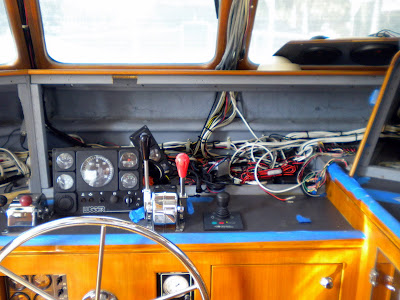 After the dash had been eviscerated, work moved to the topsides, and a large, but not functioning Seatel dome was removed, the two old radars were taken off, and the new equipment was installed. 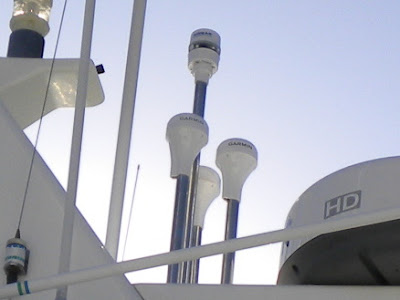 This is where the miracle of NMEA 2000 helps out. That collection of towers has two GPS's, the Airmar weather station, and the GXM51 weather receiver, all tied into the new NMEA 2000 backbone. This means that only one cable has to be pulled for all four devices. With the two new radars added, only six cables in total were pulled to the console from up top. I don't miss the old 0183 technology. 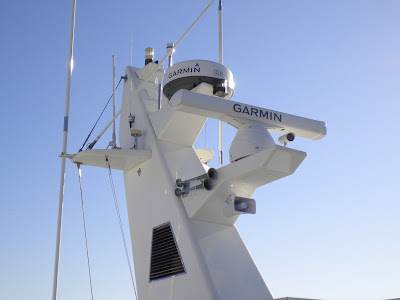 While waiting for the panels to be finished, the last of the old equipment wiring was removed, power locations identified, and a NMEA 2000 backbone was assembled. There are currently 14 devices attached to the network, and it works a treat. There were many long wire pulls, a couple of which were extra painful, but the majority of them went well due to the quality of Nordhavn's construction, forethought, and design. 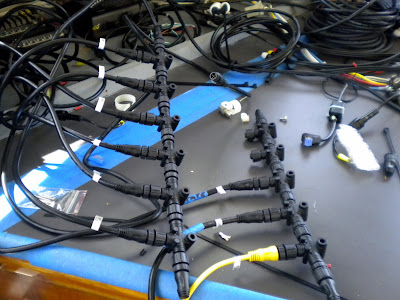 The next three pictures show the finished helm, and it turned out very nicely. I can't take anywhere near all the credit for its appearance. When problems occurred, and they did, Don had an answer. That's not to say I didn't have a answer, but Don's solution was immediate. Adding the extra depth caused by the acrylic overlays caused some fit issues. My fix would have been to take the offending panel to a cabinet shop, and have the backsides planned down by the thickness of the overlay. Don's response was "give me twenty minutes", and off he would go with the panel. A few minutes later the panel is back with a fat 1/8" shaved off in the critical areas. 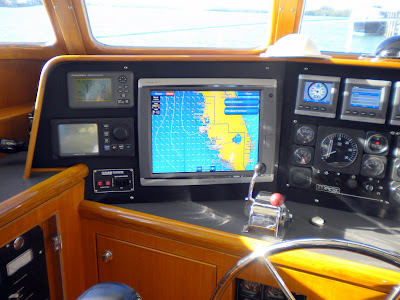 The thing I didn't know about Don when I embarked on this project is that not only is he a skilled engineer, but he is also a very talented woodworker, with a shop filled with tools I would sell my soul for. So if a special tool was needed to do some odd task, Don had it, and he wasn't afraid to use it. 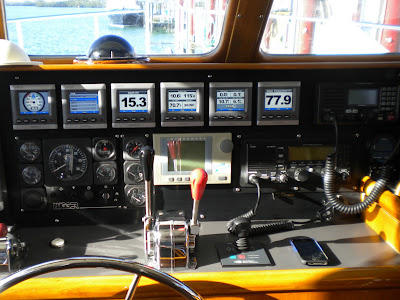 Now for the last panel on the right side. This gave me fits. This is one of these, you can't easily get there from here. The cabinet top is curved, and not flat. To make matters worse, the curve runs downhill, and the left side is higher than the right, and has a different angle. The idea was to make the new units level, relative to the top of the panel, and if you are sitting at the helm, it largely appears that way, but at other angles, it looks a bit wonky. If you go back up to the original panel photo, you can see the original installer had a similar problem, and the two Raymarine units are not parallel, or quite straight looking. I want to make another pass at this panel downstream to see it it can be made better. The end results of all of the work looked good, and best of all worked well on the first pass. 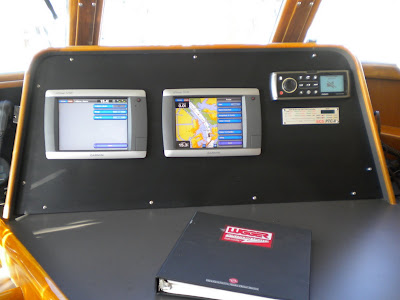 There is a second aspect to this story. I had originally agreed to do large project on another boat during this time frame. The schedule was thrown a curve ball when the second boat delivered late, and the end result was the two projects overlaid onto each other, in at times, an uncomfortable way. Both boats were going on the same extended trip, with Grey Goose leaving two days early than the other vessel. This required many very long days to make this work, and it did, but it was down to the wire. Both owners were extraordinarily patient with me, and I worked hard to rise to the occasion. Don, and Mike, thank you both, and enjoy the Bahamas.


As a result of the time crunch, Don took over the majority of the entertainment systems work, and did a beautiful job. At the onset, I had suggested that a sound bar, and the Fusion stereo be used to replace the old Bose stereo, and its clunky sub-woofer. Don selected a sound bar that had the bonus of having a wireless sub-woofer which now fits out of sight under the settee. Don also installed the two new TV's, learned how difficult installing a new TV can be, and fabricated a beautiful teak conduit wire way to get the wiring to the salon TV and sound bar. That small box under the sound bar is a hard drive based movie player. 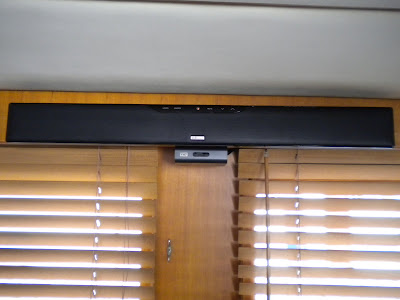 I don't think Don sleeps, because somehow during all of this activity, Don sanded and refinished the salon floor, did all kinds of touch up work, including a mar made by myself (he just grinned, and said "Another Memory"), and built from scratch a gorgeous new teak drop leaf table for the salon. 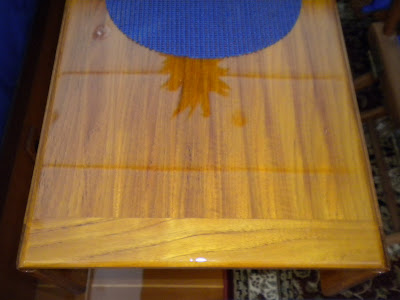 I wanted to include a couple of pictures of Don's engine room, because it is perfect as the rest of the vessel. No oil anywhere, beautifully finished, everything shines, well stocked with spares, and you could hold a dinner party in it. 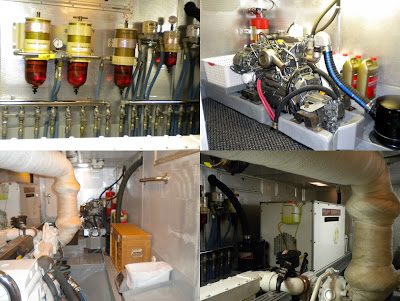 Don, thank you for the opportunity to work on Grey Goose. You were gracious, patient with my foibles, you taught me a lot, and it was truly a pleasure. I can't believe there is a Nordhavn as well kept as yours anywhere on the planet. It was a lot of work, but the results were very satisfying. 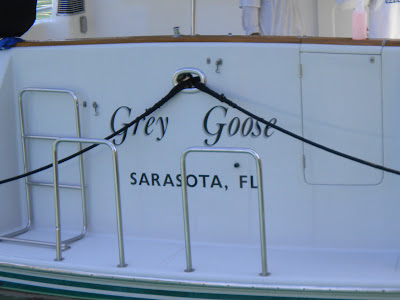 "She was a well seasoned babe, with enough curves to straighten the bent hawse pipe of a freighter. In short, she was my kind of women".  The Installer, referring to a Nordhavn Trawler from "The case of the dueling pilots" 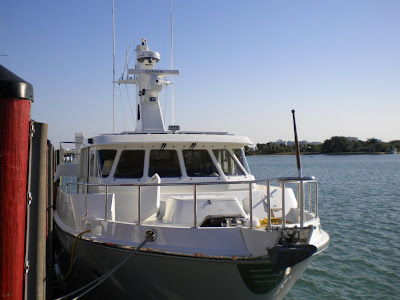 Just a small final note about my usage of the word "Materiels" vs "Materials". I sold robotics to aerospace companies for many years, and the "Materiels" version is common jargon in that line of work, and I like the variant form. Working on a boat is often like going to battle.   Bill
Posted by Bill Bishop - Parmain at 8:50 AM