Carefree learning for kids, and some adults

And now for the numbers. Carefree Learner is 41' LOA, was built out of plywood and epoxy in 1978 by 96 students from Sarasota high school at no taxpayer expense, and with a lot of help from the community. She has carried over a whopping 174,000 passengers consisting of 6th grade students, Sarasota high school marine science students, and local community organizations over the past 32 years. 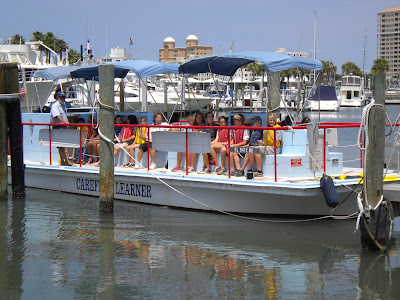 My excursion starts with watching the arrival at the dock of Carefree Learner loaded down with a 6th grade class. I was surprised at how orderly the disembarking was, despite the obvious enthusiasm, and energy of the passengers. Life jackets are collected, water bottles found, thanks given to the captains, and the little urchins are herded off by their teachers to a yellow bus to continue their ongoing incarceration in a state mandated institution. Carefree Learner also sports a very unique marine feature, a not oft used 'Time Out" bench back at the helm. 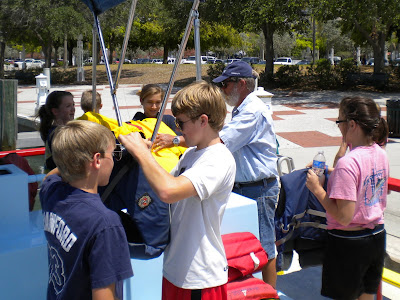 In order for the Installer to go with the kids on a trip I needed a special certificate from the state, so my expeditionary adventure is instead with the University Park Womens Club Garden Group. 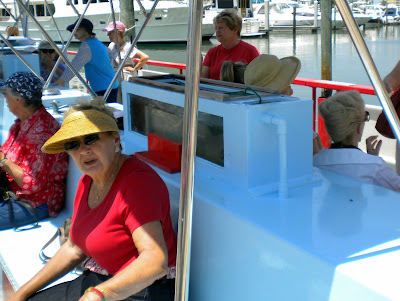 I will chat a little later about my fellow travelers, but now back to the boat. Carefree Learner is a remarkable vessel and is well designed for its purpose. The excursion is broken into three parts.  A trawling net is used to pull up a small portion of bay bottom. This requires a special permit from the state of Florida. 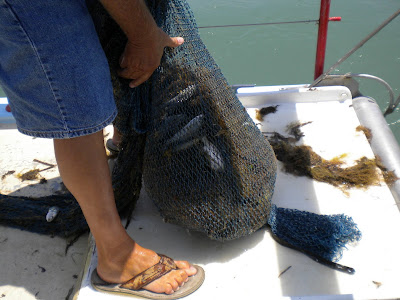 The contents of the net are sorted. Fish, crabs, and many other denizens of the deep that were caught, are scooped up and go into the two live well aquariums on the boat. The sponges are sorted into four plastic containers, and the sea grass, and other marine detritus is promptly returned to the bay. 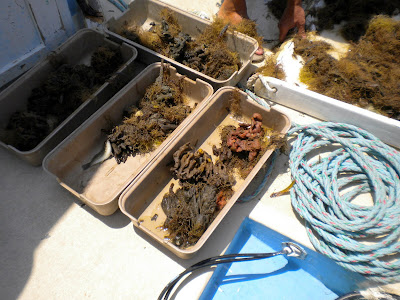 Judd McKean, our "Master of Ceremonies", and local marine life expert (he will demur) gives us instructions consisting of "you will tear open the sponges" to see what can be found. Who'd a thought how cool this would be, and what you could find. 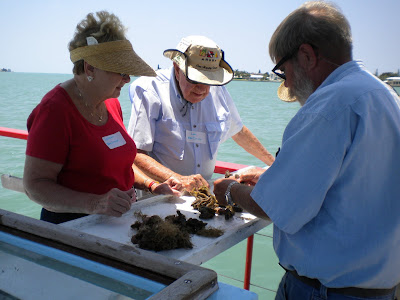 Now back to the ladies. These were not dainty fainting flowers complaining about being dewy. I watch as meticulously manicured nails immediately started to eviscerate the sponges. 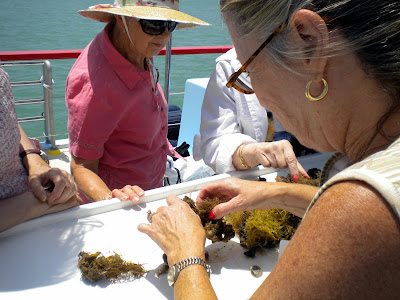 The lesson here is to both demonstrate the diversity of life in the bay, but also to show the importance of sea grasses, and sponges to local sea life. These are the bays nurseries, and provide critical protection for very young sea life. Hidden in the pores and gaps of the sponges were baby stone crabs (they are jet black when born), Brittle starfish, shrimps, and many other species. The other lesson is the bays need to have clean, and unpolluted water for sea grasses and sponges to grow in. 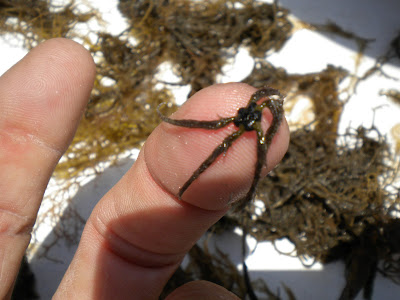 Carefree Learner cleans up and returns the sponges, and its inhabitants back to the bay, and continues on its tour passing through Coconut Bayou, a local area with lots of Red Mangroves. Judd shows everybody the difference between natural Mangroves, with their extensive root systems, and mangroves that are trimmed down to provide a better view for the property owners. The difference is striking, the trimmed Mangroves, looking like inter-tidal hedges, have less extensive root systems, meaning reduced sea life habitat, and less erosion protection capabilities than the untrimmed mangroves. 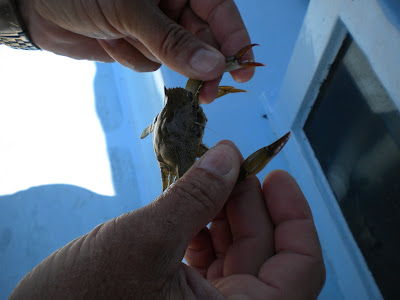 Carefree Learner beaches at one of the spoil islands in the bay. This local spot has many names, most of which, are not suitable for publication, so I will just refer to it as "Beer Can Island" and leave it at that. One by one the critters that were caught by the net are pulled from the aquarium, and Judd talks a little bit about all of them. The list of what was caught was amazing, and it included pinfish, sea urchin, file fish , cow fish, parrot fish, blue, and stone crabs, bat fish, striped burrfish, and a puffer fish, always a crowd pleaser when it gets excited. Not bad for a 5 minute haul. 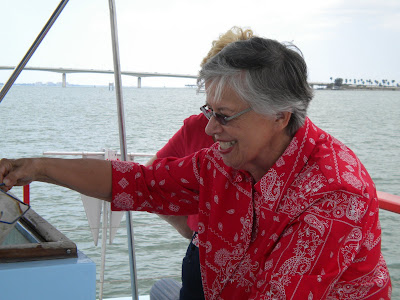 And again, everything is returned gently back to the sea, with the task avidly being done by the intrepid women on board, and off we go to a local bird sanctuary. 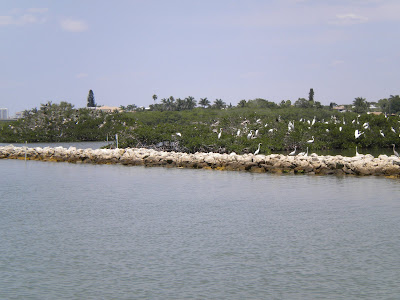 The Robert's Bay Bird Colony Islands sanctuary had a break water added to the front of it in 2008 to protect the mangroves from the intercoastal waterway boat wakes, and has a huge variety of local water birds nesting there. Among them is a pair of Oyster Catcher's. This bird nests in sandy inter-coastal areas, and were once common in Florida's coastal waters, but today, as of the last survey there are only about 1000 left in Florida due primarily to habitat loss. They not quite endangered yet, but we're working on it. As their name implies, they dine on oysters, and maybe they don't get enough Tobasco, and crackers either. I will check on this. 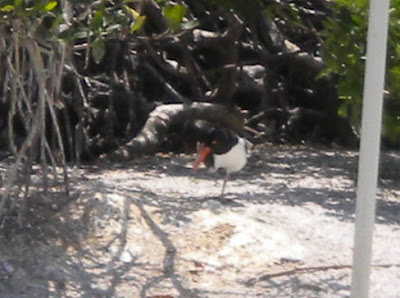 I had a great time, it sure beat crawling around in a 100 degree boat. The women were huge fun, and a most curious, and attentive group. Thank you ladies for letting me ride along for the three hour tour. Despite the fact that I have lived in the area for many years, I saw many things I had never seen before, and learned a lot. By the way, when a crab loses a claw (Hmmm sweet stone crab claws), it starts to grow a new one inside its shell. The new claw appears when the crab molts its shell. 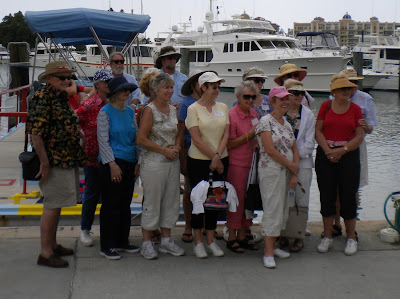 Carefree Learner to a large degree, like Blanche Dubois "Depends on the kindness of strangers" to operate. Due to budget cutbacks, and gas costs, the trips are now shorter in distance, and this 32 year old program needs help, now more than ever. One of their needs is a small chart plotter/sounder, and I will start calling around to manufacturers to see if one of them will donate one, a re-manufactured unit is certainly acceptable, and I will install it at no charge, and give the donor a shout out here. Don't disappoint me, I have a keyboard and I'm not afraid to use it. If you have some funds that need to be put to good use, this would be a good place to use them. 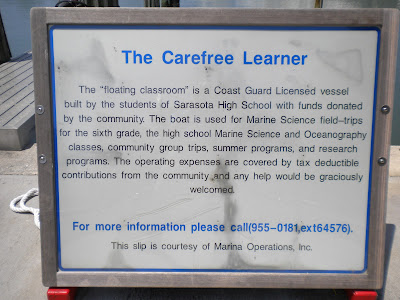 I want to personally thank captain Judd McKean for the education, captain Randall Patterson for ably navigating us around, and the University Park Womens Club, Garden Group for graciously tolerating my presence. 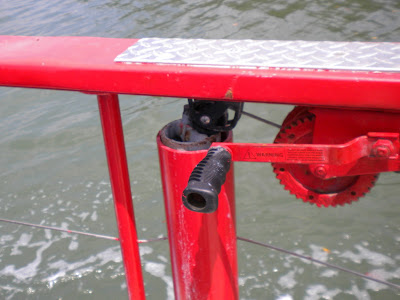 
Captain Judd McKean when not teaching marine biology, is also a local charter captain and has operated Wild Mullet Charters since 1986. He knows more about our local waters than most. You can catch the big one, and learn about it at the same time.
Posted by Bill Bishop - Parmain at 11:12 AM