This should be easy, it's in plain sight. 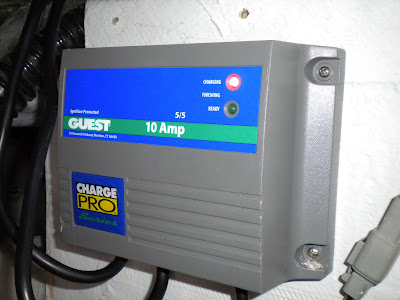 The miserable, and godforsaken unit in question is located inside the transom of a twin outboard cuddy vessel. One gets to this scabrous device by entering the gates of hell via that small, twin latch hatch you see below. 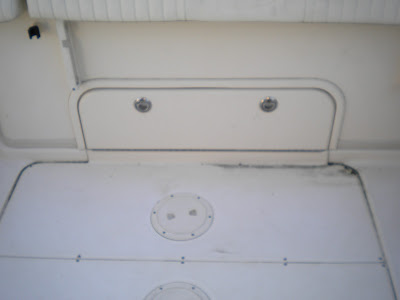 I placed some text on the photo to show you its odious location. It looks accessible, it is easy to see, and you can just reach in and touch it, but beware of appearances. That hatch access is only about ten inches high, and the generator takes away some of the available height. So I lay down and reach in with my screw gun. Oops, I can only use my right hand. For love or money, I can't get my left hand over there to join the right. Okay back out a bit and twist, and I can reach in with both hands, but now not very far, and I am laying on the bolt of death from the back side of the latch. 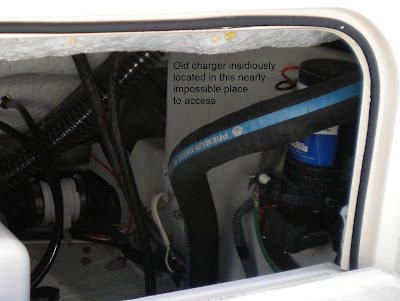 You can see the locations of the fasteners. The missing one is directly behind the exhaust hose for the generator, making my life even more difficult. 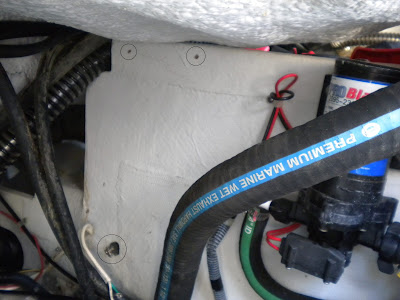 The bolts were the worst, no maybe the screws were, hell they were both ugly pieces of work. But lets start with the bolts. The nuts were on the other side of the bulkhead. What's there you ask? Why the batteries are there, behind a panel that holds the battery switches. 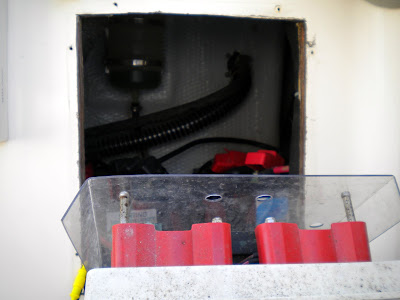 Below is the other side of the bulkhead. Do you see the nuts? No of course you can't because they are behind the back battery. I had to loosen all of the batteries enough to shift them right to get a pair of vise grips on the nuts, tied to a piece of string so I could retrieve them if something went awry. Then slowly using one hand, I got the nuts off. The closest screw on the bottom, came out also, but with tribulations. The back lower screw had been rounded when it was installed, and it was not going to come out, at all 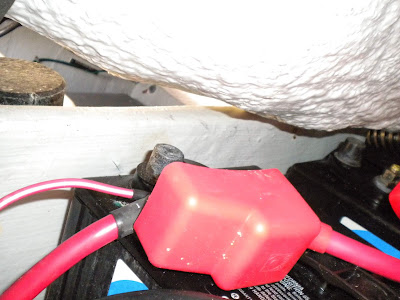 In the end, it took over an hour to remove two bolts at the top of the charger, two screws at the bottom of the charger, one of which still remained, at the expense of substantial damaged to the charger. When reason fails, and mine did, force prevails. 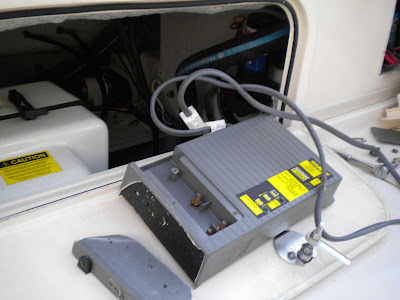 Now it is time for the new charger, which fortunately was smaller in both size, and weight. I've now had it with the latch "Bolt of Death" gouging  my ribs while I work, so off  goes the hatch. 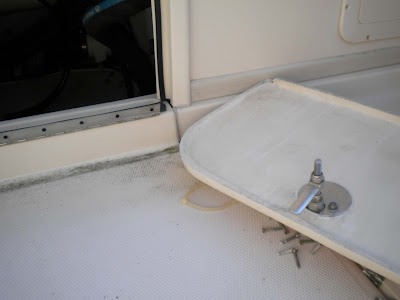 How to do this? I have the use of only one hand. I started with the top closest screw hole and drilled it. I have to put the  six pound charger in place holding the screw in it, and find the hole, and with my fingers get the screw started. I'm doing this left handed, because if I'm using my right hand I can't see, and if I can see it, my right hand is at a wonky angle. Tink, I hear as the screw falls out into the bowels of the vessel. Start over, and tink the screw falls out again. Five tinks later, and I have the charger precariously balanced on the screw, and I gently get the screw driver on it and get the screw tightened. One down, and three to go. Using the drill with the bit, I find the second top hole in the charger, and using the drill bit I start lift the charger to level, and crack, tink, as the drill bit snaps off. New bit gets chucked in, and this time I get it level and the hole drilled. Same scene again. Stick the screw in the charger's hole, and tink. Try again, and I get it to hold long enough to get the screw driver on it.
The last two screws were tedious, but all went better. Now to connect the wiring to the batteries. You know the original installer wouldn't have made the connections to the front batteries, when he could have continued my pain by doing the connections on the back batteries. I was not about to emulate this approach, and I installed them on the front batteries, made the AC connections, also not fun, and a happy light appears on the charger.

I had spent over three hours doing this chore, and I had exhausted my extensive explicative vocabulary, which is available to me in several languages. I had also run out of horrific things to do to the designer of this boat (I still want to build that iron maiden) for this awful piece of work. Four fasteners, and a few electrical connections, and over three hours ugly work. It's easy. The client was happy (Thanks George), and gave me a most appreciated gift, which was promptly utilized that evening. 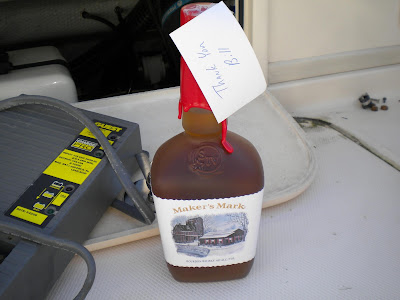 I have calmed down a bit, and I think instead of the iron maiden, keel hauling, followed by fifty lashes with the cat o' nine tails will suffice for this designer of this terrible, and unbelievable piece of work. As I said to Watson earlier " I think the problem is that the designers never have to fix, or install things on them, or they wouldn't design them that way, and the marketing departments try to jam to much equipment into too small of a space. I think all designers should spend a year working for one of their bigger dealers. The end result would be better boats, but alas Watson, that is not likely to happen".
This install was done either before the deck was installed, or possibly before the gen set (I feel sorry for the gen set guy). This is inexcusable design work. Humbug, drat, dern it, and crap, I have already used all of my more satisfying vocabulary. Some days I just hate boats, and their designers.
Posted by Bill Bishop - Parmain at 10:18 AM