Is it only me? Or is it just my imagination that this is the most dangerous thing on a boat. This insidious invention only appears to be a useful way of restraining wires. Its real purpose seems to be the collection of copious quantities of my DNA for some unknown, but no doubt Frankenstein-esque purpose. Why else would it have all of those sharp edges. It's bad enough that the cut off end is sharper than a razor blade, but even the small square body of the tie wrap has sharp enough corners to insure efficient collection of my flesh. 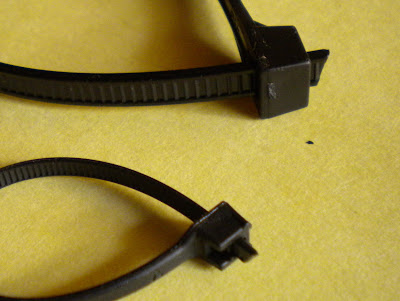 The rules say, you must cut off the ends, to make the installation look pretty, and to insure the next person who comes along will have their DNA amply  collected. 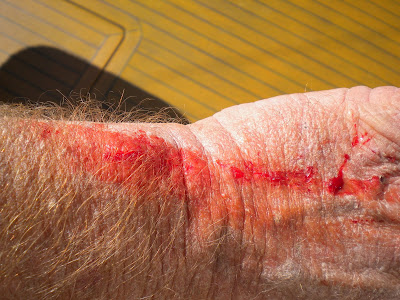 This picture is a typical example of the daily carnage this invention from Hades can cause. I have also observed that the more white leather and carpet there is in a boat, the deeper, and bloodier the scrapes from the cable ties are. How they know to do this, I don't know. Perhaps some form of advanced foreign nanotechnology is being used.
Yes, I know they make a tool to cut off the tie ends flush, but it is one more giddy bob I have to carry around in a bag that weighs to much anyway, and often the tool is difficult, and awkward to use in very confined areas. 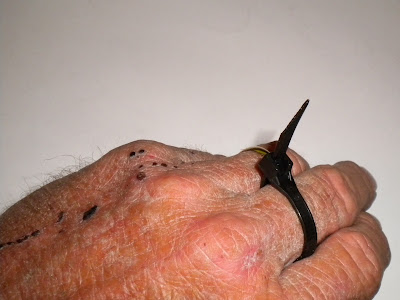 But worst of all is the danger to an unaware populous by this seemingly innocent tie wrap. For in reality it is a truly dangerous device. The scientists at the top secret Parmain laboratory have analyzed the potential threat these so called "Cable Ties" pose to the unknowing public, and we were horrified when we uncovered, the "Shiv Ring". This dagger of death is hard to see with an x-ray machine, very sharp, and could slash open up your carotid artery in an instant. We have sent telegrams to the TSA, and prison wardens to alert them to this clear and present danger. Citizens should be on guard, and report any suspicious tie wrap purchase activities immediately to the authorities. There has to be a better way.