A hush falls over the crowd in the large hall, as the president of S.M.I.T.E. (Society of Marine Installer Technological Entrepreneurs) walks up to the microphone holding three large envelopes. "Thank you for your patience, I know it's been a long night, but at last we are ready for the final awards." "As you all know, the prestigious, and coveted "Ron Popeil" awards are given to the applicants who have installed a chart plotter in a way that makes it theft proof. The judge's criteria is that it should be virtually impossible to remove, and survive in a console overnight, in the Mogadishu, Somalia "Thieves Market."
"Our esteemed judges have done their due diligence, and reviewed over a hundred contestant entries. So without further adieu, we will start with our second runner up. So let's give a big installers hand to Steve Stickus. The judges were very impressed with the massive amounts of 3M 5200 applied everywhere, and his technique of using a hair dryer to fully cure it, especially in areas where it was almost three inches thick. Steve wins a $200 Harbor Freight gift certificate, and the "Spray Hair" in a can trophy."
"Our first runner up is John Spawl, and the judges have noted that his finesse, and attention to detail, is alway a joy to see. John's talent is in making the install look perfect in appearance, while retaining all of the subtle security measures he is famous for, such as screws driven into slightly undersized holes, insuring the heads will snap off when removing them. The rounding of Phillips head screws with undersized bits, and his personal specialty of driving cross threaded nuts all the way down on the bolts. John wins a $500 Ace Hardware gift certificate, and the "Pocket Fisherman" trophy."
"Okay, I see the bar is getting ready to open, so let's get to the grand prize, and this year's first place winner, is Ian Sidious. Let's all give him that big installers congratulations, and a standing O."
"The judges were amazed at Ian's ingenuity. Starting first with placing the chart plotter as close as possible to the console's edge, and doing the actual install prior to having the console mounted in the boat. This insured that the two outboard fasteners could not be reached, or seen at all, and further making sure lots of extra bonding putty was used, to reduce easy access." 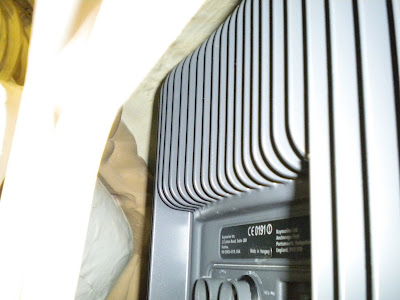 "Ian also used excessively long bolts, and managed to damage the threads just enough, to guarantee that two people would be needed to remove the nuts." 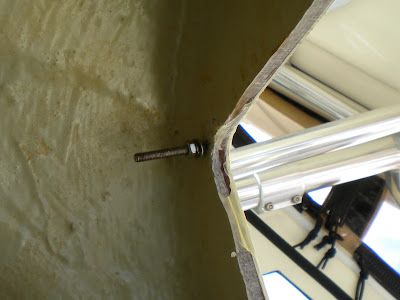 "This clever approach created a triple threat, causing the potential thief to drill out the bolt heads, in a time consuming, irritating, and messy process." 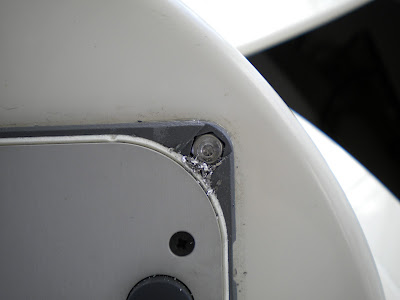 "But to the judges delight, Ian had two additional treats in store to make thievery all but impossible. The first was the use of epoxy glue to seal the edges, and the "coup the gras" was a hole cut out that was just slightly smaller than the chart plotter, requiring a rubber hammer to beat it into place." 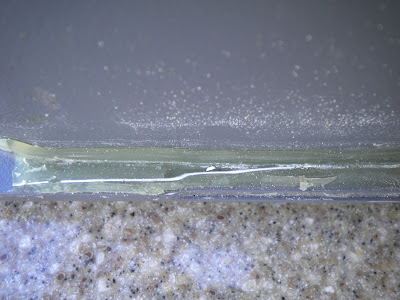 "Congratulations Ian, you will take home the 1st place Ron Popeil "Veg-o-Matic" trophy, a $1000 gift certificate from Tractor Supply, and a collection of colorful designer Tyvek suits, which will give you that professional appearance you're looking for. So what do you have in mind for next year Ian?"
"Well I am proud to be a member of S.M.I.T.E, and of the contribution we all make to the world of marine electronics, and the theft protection we provide to our owners. I am experimenting with grade 8 bolts. They're really tough to cross thread, but with my new Tractor Supply gift certificate, I think I can now buy some hydraulic equipment to do the job. Thank you my colleagues, for this magnificent honor."
Posted by Bill Bishop - Parmain at 1:56 PM