Years of experience tells me something is awry. The charred appearance lends me to believe the little box has suffered some malady. My sharply honed instincts tell me this is likely at least one of the reasons the boat's air conditioning system is no longer functioning. It's also possible it's not as bad as it looks. Crap, I'm just pretending to be an optimist. The same observational skills tells me this thing is toasted into oblivion and under the best of circumstances won't suitable for an open casket viewing. 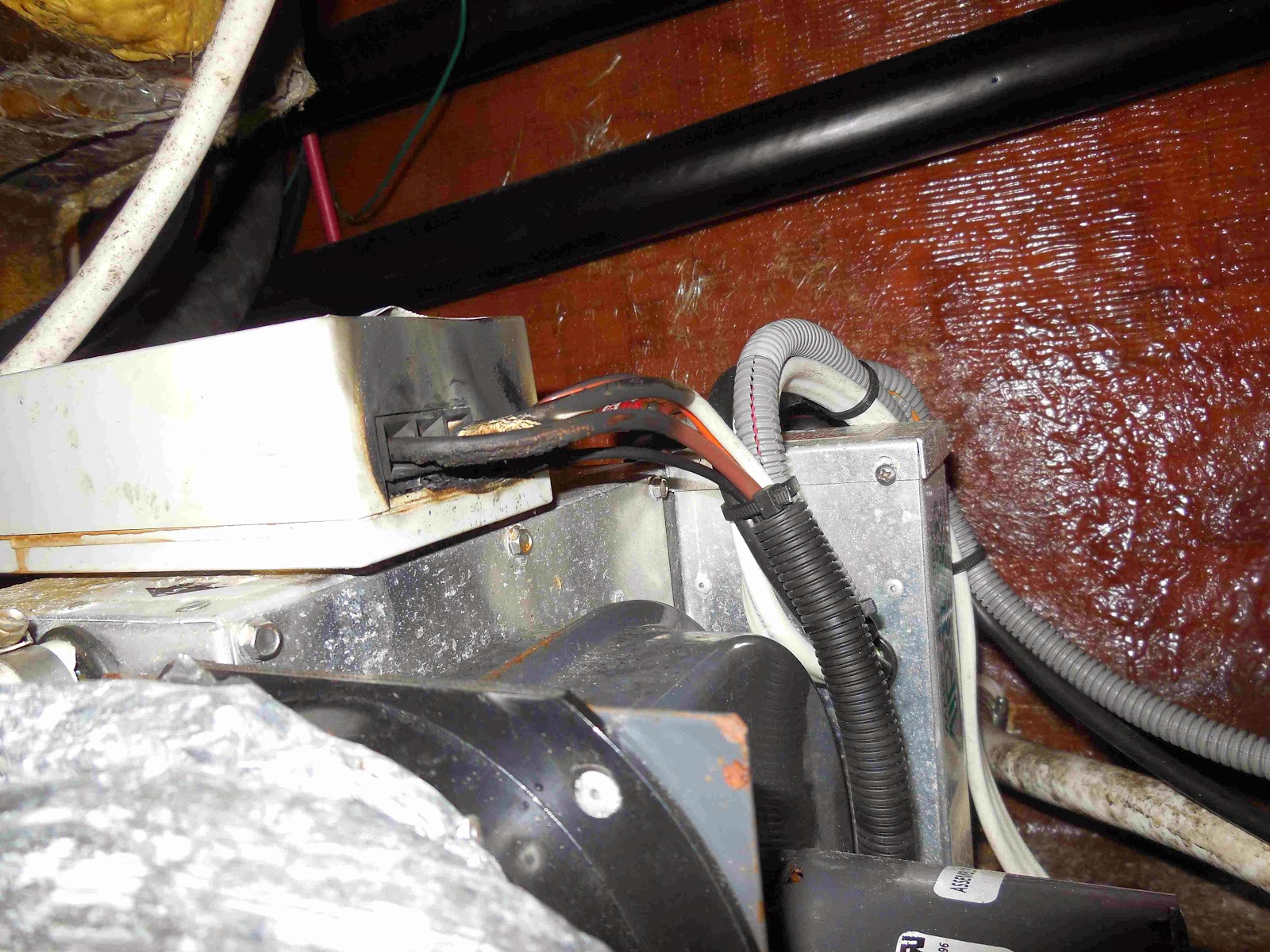 For me it's not enough to merely know it's broken. I want to know why it broke. This little box ran perfectly almost daily for two years, and then spontaneously combusted.

If I put a new one in will this happen again? Is there a design flaw? Improper wiring or the ilk? I often don't get good answers, but it never stops me from trying.

In this case I think a fire potential truly existed, and maybe if mounted elsewhere in the boat it's possible a frantic 911 call would have been made. 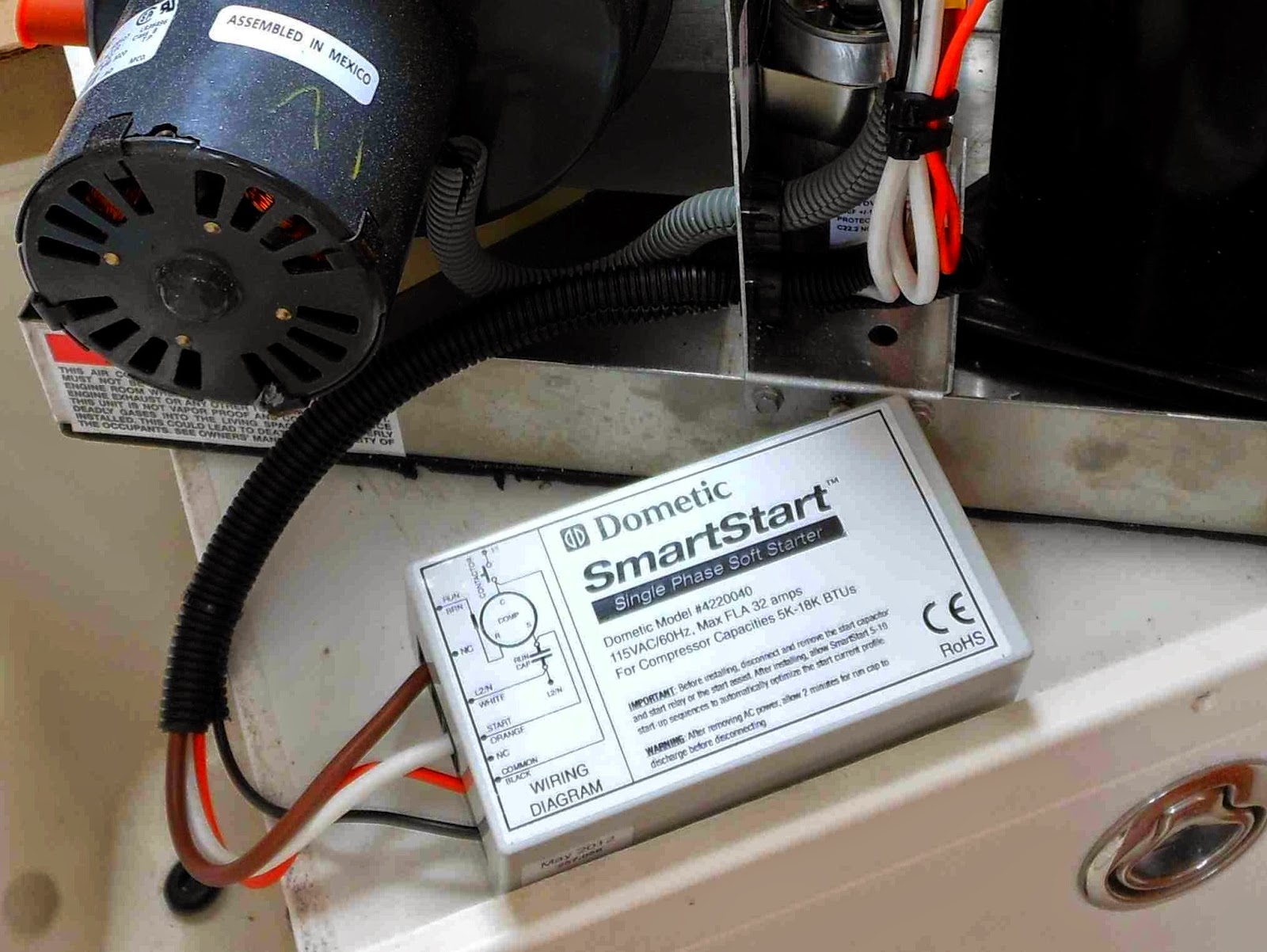 I installed this little box myself two years ago. I knew it when it was just a baby gently swaddled in a cardboard box. It's a Dometic Smartstart.

This system dramatically cuts an air conditioner's start up amperage loads. In my case about 40 percent, but in larger systems this can be up to a 65% reduction. It's a very clever design that works as advertised. 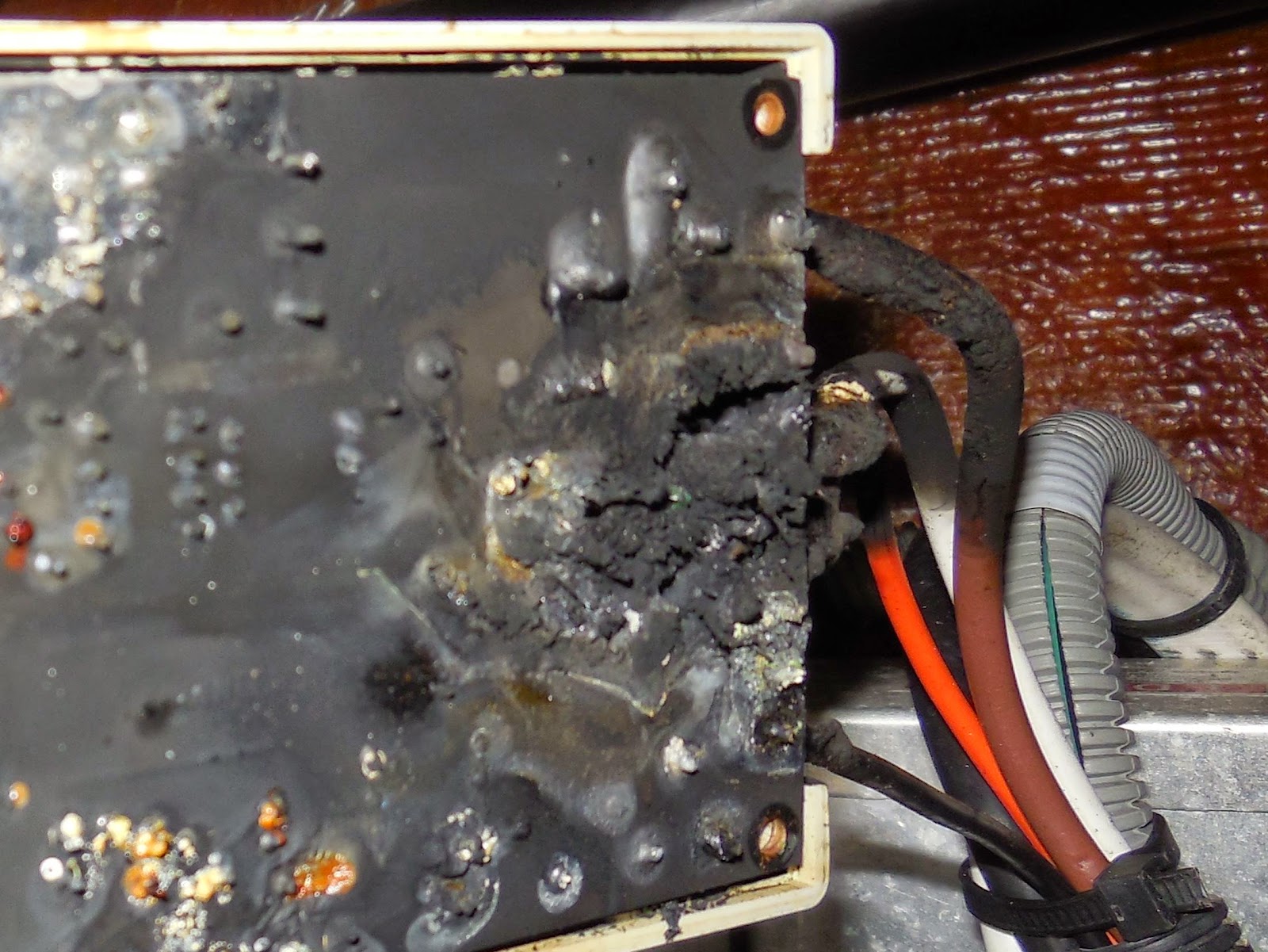 I started my forensic examination by removing the bottom of the box. Yikes, the circuit board actually has holes burned through it. Solder had melted telling me the temperatures had reach around 350 degrees. 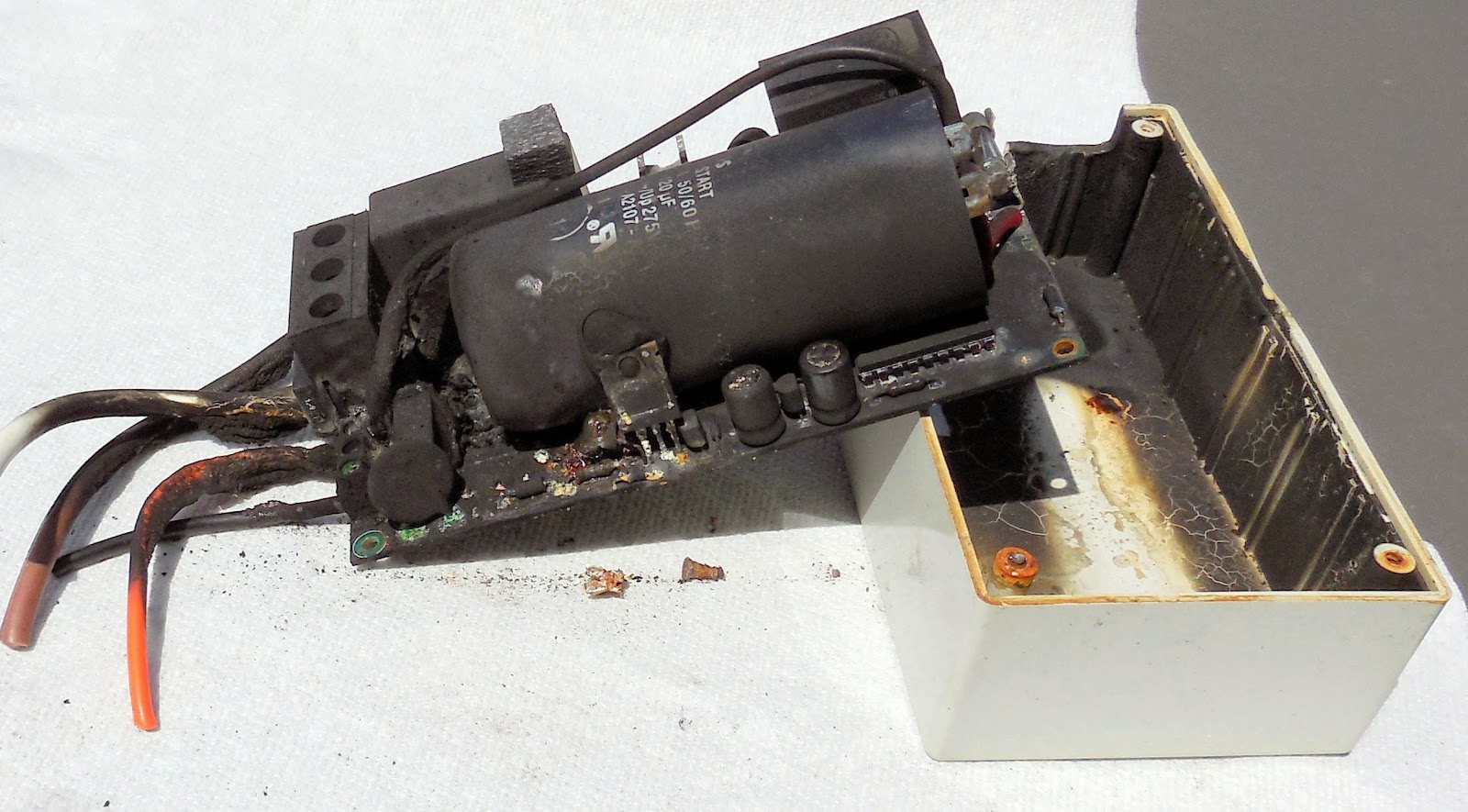 The little hole I'm working in feels like Sarasota in August. It's time to escape with the little box to visit cooler climes. My Vorpal nippers go snicker-snack, and I galumph the box off the boat to take a closer look at the carnage.

It's not pretty and my initial assumption the box was a goner is confirmed. Charred and melted parts all covered with a liberal coating of carbon black . 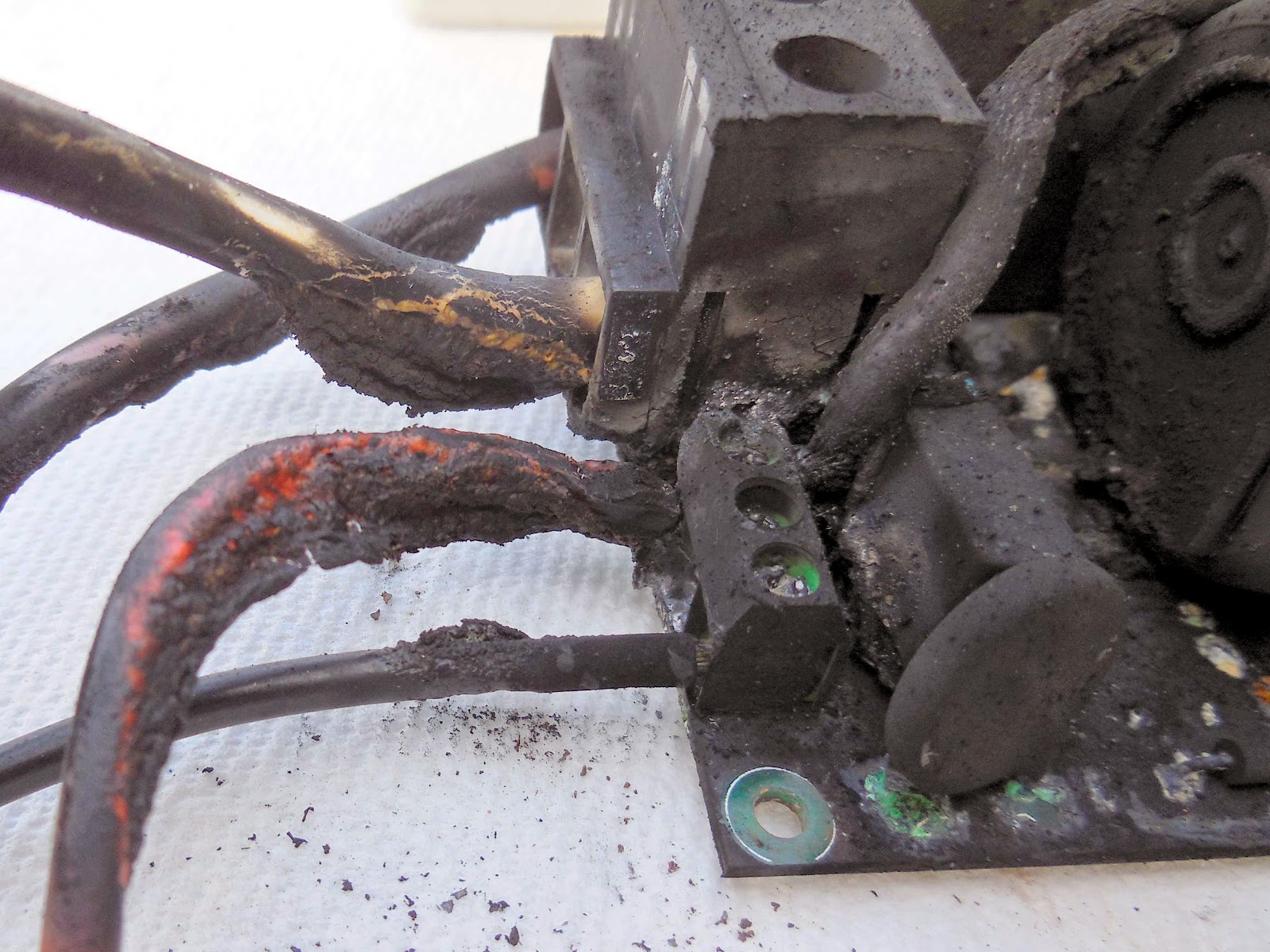 Its proximity to the other wires caused them to melt somewhat also. A call ensues to Dometic's tech support group and a nice guy answers. I describe what happened and inquired if they have seen this before? The response is "No" then silence. Okay, do you have any ideas what could cause this to happen? The possibilities are slowly extracted one by one. Power surge? Bad capacitor? Windings shorted in the compressor? Could there be issues with the high pressure switch?

Now I wasn't expecting a response like. OMG, one our units did this? Ship to to us immediately and we will send you a replacement. We want to see what happened. This certainly didn't occur. On the other hand I suspect this little box has seen way more service than most. It has run 24/7 for the larger part of two years. There is one month per year when it sits in dry storage while the owners seek a cooler environment. I believe few of these little boxes see this level of actual operational hours. I guess if I was the manufacturer of the box I would be at the minimum curious to know what happened.

The plan forward is to restore the air conditioning wiring back to its original condition and see if it still works. If so then I will blame the problem on the Smartstart capacitor. The owner can decide if he wants to buy a new Smartstart box and have me install it. If the air conditioner is toast, then I will blame the Smartstart failure on compressor winding shorting, something else of the ilk, or if I'm just feeling peevish both. 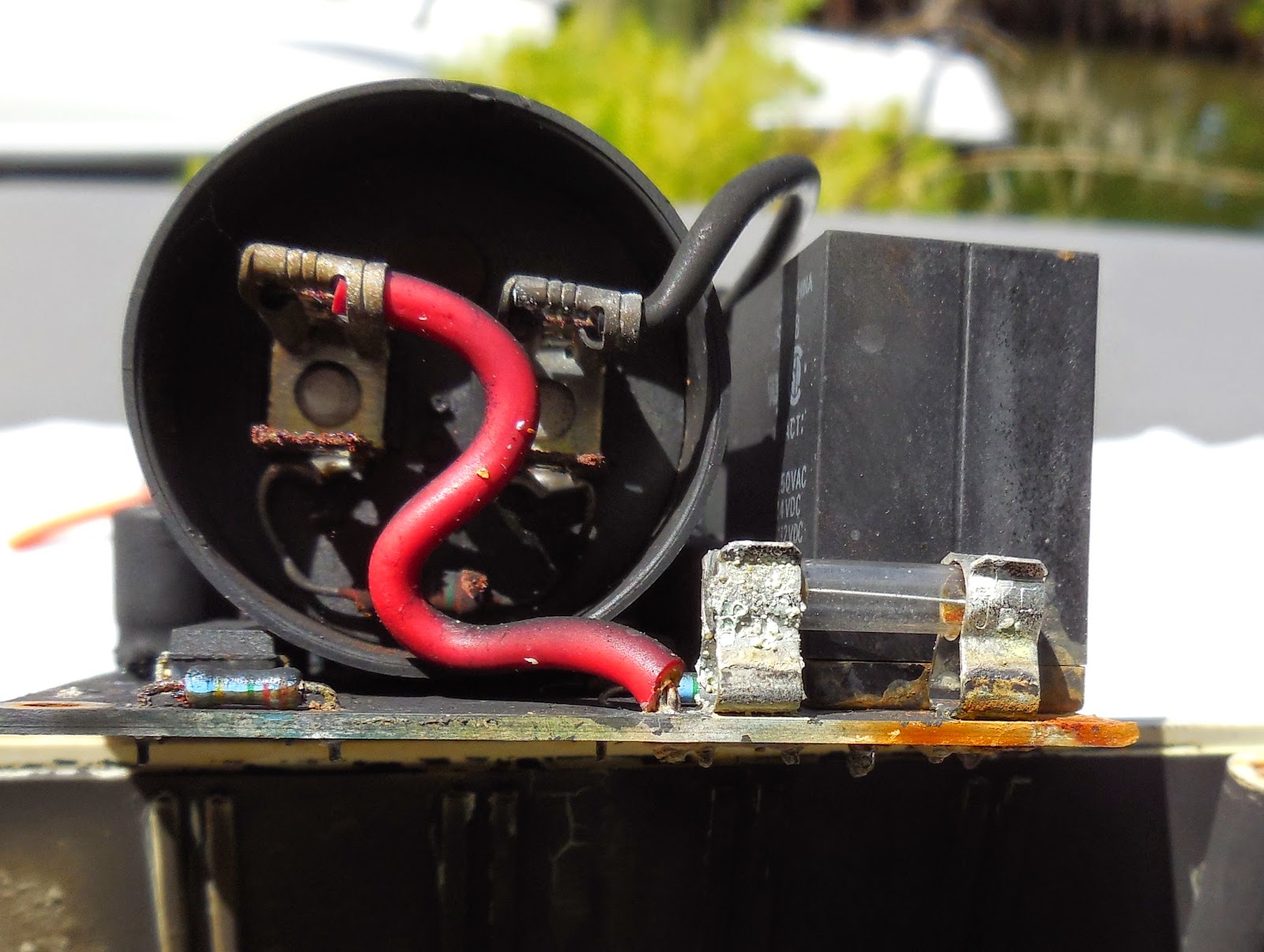 The finale of this meander is a homage to the truth in Murphy's laws. Paraphrased  it goes "If you install a 50¢ fuse to protect a $400 component, the $400 component will blow to protect the 50¢ fuse."
Posted by Bill Bishop - Parmain at 1:21 PM