I have seen enough people with easels up painting the scene above to know that some like the picturesque aspects of all the boats resting quietly at anchor, but there have been issues with a small group of live aboard, and quasi-live aboard vessels like the vessel above. It is apparent to me that it doesn't sail anywhere despite the casual appearance of the rigging, and there is no motor. This vessel is someone's home, even as stark as it is, and this drives some locals crazy. You hear statements like they're homeless people, they don't pay taxes, the boats are ugly, and they're polluting the bay. There is some truth to all of this, and this sort of thing causes varied levels of consternation in local, and mostly wealthier communities. Add to this issue some vessel that is a little south of being a multi-million dollar super yacht being anchored, and despoiling, at least in their mind, some residents magnificent waterfront view. "Look Buffy, that deplorable sail boat thing is ruining our view, call the anchoring police immediately."
But what has really upset all of these water based communities is that the local governments have historically had little legal authority to limit non-live-aboard (cruisers) anchoring in their state controlled waters (live-aboard vessels are regulated), despite their efforts to create ordinances to do so, and it drives them nuts. The Town of Longboat Key attempted to do so with their Chapter 93. The ordinance basically says no to everything boating, but the section relating to anchoring has been shown to be in contravention with state law. I'm not specifically picking on Longboat Key, there are many other Florida municipalities that have tried to restrict anchoring by regulation, and Marco Island is another one of many examples. 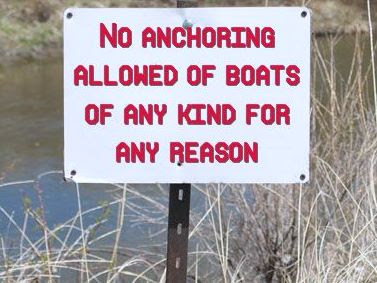 The brunt of the State of Florida statutory boating regulations are in Chapter 327. There is the old version (pre 2009), and the new version (post 2009), and an additional twist to all of this. In 2009 the section 327.22 was deleted, and portions of it were consolidated into 327.60 titled Local regulations: limitations. What happened here was local governments limitations and regulatory abilities were more clearly spelled out. The notable part of this change was that the ability to anchor your boat, in state waters, which was somewhat fuzzy in the older version of the statutes, was more clearly spelled out. What had become limited, and clarified was local governments could not pass laws regarding the:


f) Regulating the anchoring of vessels other than live-aboard vessels outside the marked boundaries of mooring fields permitted as provided in s. 327.40


Now like all things legal, there was some nuance here, but on the whole, if you are a cruiser passing through Florida you can anchor where you want as long as it is not a specifically marked, and state permitted location, for now, but here comes the twist. 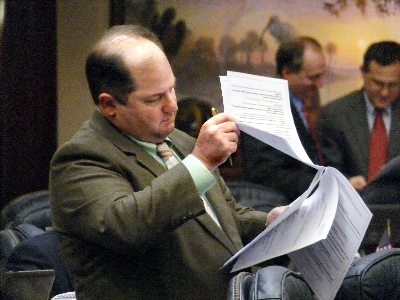 Let's now meet Representative Baxter Troutman, from Florida. He is from Winter Haven in the middle of the state, was a Florida state representative (district 66) from 2002 to 2010, and was term-limited out of office. He is also the grandson of Ben Hill Griffin. Katherine Harris is also Ben Hill Griffin's granddaughter. Representative Troutman is the sponsor of Florida Bill HB 1423 filed in March 2009, and it was co-sponsored by Representative Paige Kreegle (district 72) from Punta Gorda on Florida's west coast.

Buried on page 76 of 89 pages of this bill is the start of the small section you see above, with the operative line being "to explore options for regulating the anchoring or mooring of non-live-aboard vessels".  The FWC (Florida Fish & Wildlife Conservation Commission) pilot program has selected five sites for inclusion consisting of the city of Sarasota, city of St Petersburg, city of Stuart/Martin county, Monroe county/Key West/Marathon, and St. Augustine. Inclusion in this pilot program also gives the participants the ability to created non-live-aboard anchoring regulations in the area of their jurisdiction. 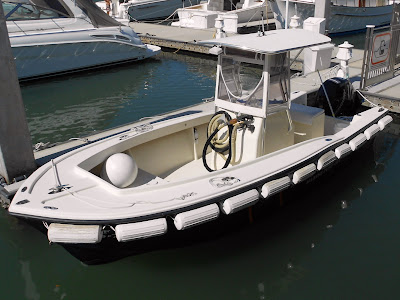 In Sarasota, the great mooring field project has not gone well. With some fanfare derelict, meaning homeless shelter boats were removed, and all of the other boats in the anchorage were pushed back from the construction area. Engineers surveyed, and pontificated, and called for helical "screw in" mooring anchors. A contractor was hired to install the first 38 anchors, and oops, the anchors didn't hold. There was lots of finger pointing, additional consultants were hired, and $500,000 dollars quickly evaporated. The city still has grant money left, and they will persevere. There will be a public meeting next week to discuss anchoring limitation regulations that are now possible, and I shudder. The one thing we have here is endless retired non-boaters with lots of time on their hands.
The bottom line is this legislated pilot program is a poor way to solve problems that were manageable with current laws and regulations. Pollution problems can be solved with pump out boats like the new one we have above, which will currently come to your boat, for no charge in the for now free anchorage, and solve your holding tank issues. The city initially had set mooring fees in excess of $400 per month, regardless of size, which would be hard to swallow for a boater with a 26' day sailor. Tentative rates are now by vessel size and range from $250 to $345 per month, and transient fees range from $18 to $25 per day, and oh yes, you must have proof of insurance to use the mooring field. These fees do come with with good amenities.
Now that the door is cracked open, the city fathers, and mothers are chomping hard at the bit to get control of all of the anchoring in their jurisdiction, and they all lobbied hard for this.  Thou shalt not anchor within view of homes, within 1000' of the shoreline, no anchoring off Longboat Key period, and you can only stay one night, if you can find a legal place to anchor that is not in our mooring field. You don't want to have a "Lights Out" visit from our local constabulary do you? This is a bad idea for all that boat and cruise, I trust these municipalities about as far as I can throw them, and  I can't pick them up. They are not boater's friends. Keep a close eye on this issue, and participate in the local public meetings, or you will definitively end up holding the short straw.


Here are some resources.


A good review. and history of Florida anchoring regulations.
B.A.R.R. Boaters Anchoring Rights and Responsibilities, and their Facebook page.
Posted by Bill Bishop - Parmain at 10:15 AM