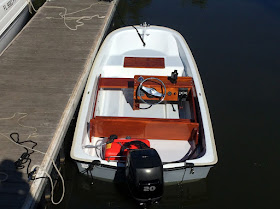 Despite its factory new appearance, this boat is not. I don't know it's  exact age, but it's a well restored Super Sport model built from 1984 to 1994. This would make it somewhere between 21 and 31 years old.

The problem with visually dating these little boats is they are like vintage Volkswagen's. I remember an old ad of theirs saying something like, "We made 132 changes this year. Can you find them?" In other words how in the world could you tell the difference between a 1962 Volkswagen and the 1963 version. And so it goes for many early Boston Whaler 13 models.

Although the current 13' Boston Whalers are excellent products they have diverged dramatically from the original Whaler 13's.

Starting with the GLS models in 1990 the hull has morphed from the original cathedral/tri-hull into a deep V sponson shape, and the notable mahogany features have disappeared. 250 anniversary versions were built in 1998, and that was the end of the classic Whaler 13 era.

The original design is really an evolved chimera in two parts. The first was the epiphany by Dick Fisher of using a foam filled hull, not a simple technical task to pull off at the time. The second was the hull design.

The first hull built in 1954 was a variant on Hickman's Sea Sled design, and had some flaws that included propeller cavitation issues. Working with naval architect C. Raymond Hunt a small V structure was added in the center creating the "Cathedral" hull. Some additional hull tweaking was done and the eventual result was the Boston Whaler 13 Standard model that went on the market in 1958. 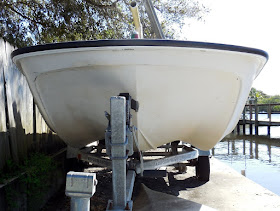 The hull design of the 13 Whalers changed little until mid 1971 when the "Smirk" was added. This is where the outboard keel line was carried up and under the bow creating its distinctive appearance.

As part of the change two small chines were also added near the bottom of the center keel. The two changes improved the ride and handling a little bit, and made the boat much drier in choppy water.

Let's take a look at my original criteria starting with Timelessness. This boat was in production for nearly forty years and is one of the most recognized and iconic vessels ever built.


It's a very safe boat, and the claim it's unsinkable has been confirmed through the years. It might not technically have been the first unsinkable boat, it's certainly the first production fiberglass boat that was truly unsinkable.

Durability is certainly an outstanding characteristic. The vast majority of these boats are still in service, and endless kids have cut their boating teeth with them and weren't able to destroy them. The majority of these boats that aren't with us anymore passed away from gross owner neglect, and this took some considerable effort on their part. We can also add the fact that more than a few have been cut in half and used for advertising.

Functionality is where it excels. Water skiers have been pulled, fish caught, sunsets watched, and it's a good tender. They have been used by the military, fire and rescue departments along with state, and municipal agencies. It's also a been a favorite of surveyors, research institutions and even NASA. This small boat has a remarkable capacity of 1200 lbs and 6 persons. It weighs between 250 to 410lbs  depending on model (no engine) and only draws 6".

Resale value is outstanding, and it depreciates far slower than most boats. Many of the older ones have actually appreciated in value if well loved.

I'll cover both simplicity and maintainability in one breath. They aren't complicated, well built and there is a wealth of technical and repair information available online. Many companies specialize in supplying everything from wood kits fully finished, or unfinished, and parts. 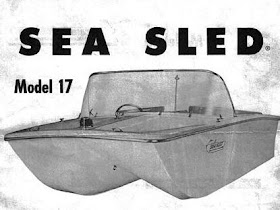 I've saved design for the last. The Whaler 13 was certainly a different boat for its time. Most designs of the period were using variants of V hull designs.

Although closed cell expanding foam was newly available at the time, the two piece Whaler hull construction using it was unique. Early fiberglass boat builders were a bit short on good fiberglass materials science information. A consequence of this was the was the tendency to show an abundance of caution in construction by using both resin and fiberglass lavishly. This resulted in boats that were much heavier than they would be today.

The Whaler's foam sandwich constriction created a stronger boat with a thinner fiberglass hull and was much lighter than most of its counterparts. The only issue with this boat, as any owner of these boats know is the ride at high speed in a bad chop could leave you with a sore bum. This isn't an uncommon attribute of many boats of this size as my bum can personally attest to.

So is this the best production power boat ever made, albeit a small one? I think so. If you don't, tell me why? Timelessness, safety, durability, functionality, high resale value, maintainability, simplicity, and design.

There is a wealth of information on the Whaler 13 online:

Photos by author, or are in the public domain.
Bill Bishop - Parmain at 9:24 AM
Share