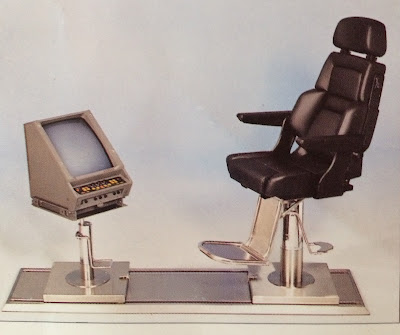 The options are to rip the old chairs out and buy new, or use the existing chairs somehow, someway and still be able to replace them downstream. They still look nice. The later option is chosen, but this is not without challenges. 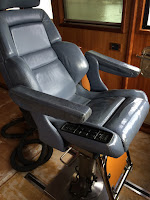 There are three subsystems to the chair. There is the rail system and the stainless steel platform that rides on it. A base that consists of a really heavy, or so my back informs me hydraulic cylinder with a foot pump that still work well, and the chair itself with a 10 switch panel for the motors with worm gears that adjust everything. 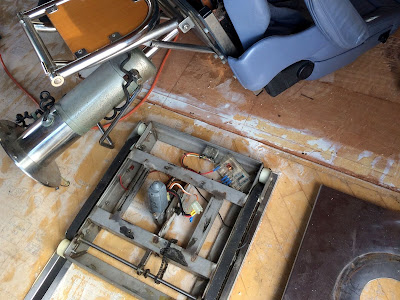 The chair you're looking at above was electromechanically in a bad way. This started with a power on switch that doesn't, and hasn't been made in many yahrens. Goal one is to get the chairs into a location where they can be fixed in place for all time.

This required a little forensic analysis. There is no documentation on how it works so the place to start is to take it apart. Stubborn fasteners get removed, the chair is laid down and huffed off of the base which then lifts off.

It seems simple, but there are other things not so obvious like where does the power come from? This is an important question because I want to disconnect it completely and safe the electrical system.

The mechanics of the thing is straightforward. There is a DC motor in the center attached to a worm drive gear with a sprocket. A chain drives a shaft from its center which in turn has sprockets at the ends. The side belts have cogs on their underside and pulls the platform to and fro.

But where the heck is the power coming from? If you blow the above pic up you can see what looks like at best about 14 gauge red and black wires going over to the sides of the platform and they're attached to two very small boxes. The wires didn't look big enough to supply the entire chair and the little boxes looked like limit switches. It turns out I was wrong. 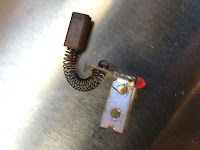 I took a closer look at what I thought was a limit switch and there was a small button on the side of it. What else was I supposed to do? It was almost like it was saying push me, I dare you, and I did. The assembly you see popped up.

It was a carbon brush and spring like you would find in a DC motor. Who'da thunk. The brush rides on a shaft that you functionally can't see on the underside of the rail and feeds power. Clever but too Machiavellian for my taste.

Most of the mystery's of the chair have now been divined. The next step is where to position them. I get the captain and place him the helm chair. The seat is jockeyed around until he can stand in front of the helm, stand and use the seat as a leaning post and sit in it and still use the helm (in this scenario your feet work best using the spokes). The side chair is also positioned but a little further aft for easier access.

Out comes my drill and holes are painfully punched in the SS steel base frame corners and number 10 screws lag it into the deck to freeze it into place. Loose wires are capped off and secured and the chair is reassembled in its new forever home. 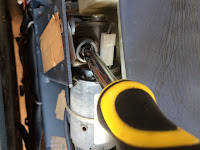 In the very beginning of this sub-project  I looked closely at the little motors and worm gears. The worm gears all have a about 1/4" (it's metric) square fitting. I stuck a screwdriver into it and it turned, and at a glacial pace what it was attached to moved. Cool, plan B is resolved and I can manually adjust the seat's components.

But even better the local Harbor Freight store for a whopping investment of $4.99 has a flexible shaft that will reach all of the motors. Chuck it into a drill and crank away in either forward or reverse. Problem solved, but I have more challenges to talk about including  making a radar fit where it doesn't.
Another is getting 12 volts out of 24 volts with a small transformer used on aircraft that only costs $20.00. I needed this clever piece because the only part of the extensive new electronics that all runs with 24 volts is the 12 volt N2K network that doesn't. As a modest editorial comment why is NMEA 2000 only 12 volt instead of both like chart plotters? Much more to rant about is in the works, and a rainy Florida Sunday gives me some needed time.
Posted by Bill Bishop - Parmain at 11:39 AM